Saint Germain – The Chohan Of The Seventh Ray


It is believed that Saint Germain is the sponsor of the United States of America. He is the Master Alchemist of the sacred fire. His Twin Flame is Lady Master Portia, the Goddess of Justice. His name comes from the Latin name ‘Sanctus Germanus, ’ which means ‘Holy Brother.’

Saint Germain brings laughter and humor into our lives. He also bears the attributes of grace and dignity. The Flame of the 7th ray is the Violet Flame. This ascended master promotes the practice of the Violet Flame. He enables humankind to understand its value and the role that it plays in our lives.

Saint Germain reincarnated in the past as Merlin, Roger Bacon, Christopher Columbus, Francis Bacon, Prophet Samuel, Saint Joseph, the father of Jesus Christ, and Saint Alban. In all these lifetimes, he played a major role in the lives of humanity. He works to ensure that we live peaceful lives. He urges us to seek spiritual enlightenment that will enable us to enjoy a great connection with the Divine realm.

Saint Germain’s symbol is the Maltese cross. His aura is violet and can go up to maroon. He enables us to expand our minds by examining ourselves. He asks us to look within us and know the things that we need to do in order to live a fulfilled life. Saint Germain encourages you to acknowledge your wrongdoings and work on making things right and being on the right standing with God.

Saint Germain’s Role in Our Lives

Germain preaches Self-transformation. Transmutation is an important part of ascension and perfecting the person that you are. He works to initiate our souls in the science and ritual of transmutation using the Violet Flame. Diplomats, actors, writers, defenders of justice and freedom, and priests of the sacred fire serve with Saint Germain on the 7th ray.

In the 20th Century, the presence of this ascended master was felt when he sponsored an outer activity of the Great White Brotherhood. He contacted Guy Ballard, who he trained as his messenger. Under the pen name ‘Godfre Ray King,’ Guy released the foundation of Saint Germain’s instructions to the New Age in his books ‘The Magic Presence,’ ‘The ‘I AM’ Discourses’ and ‘Unveiled Mysteries.’

This ascended master has done great things in the world. In 1961, he made contact with Mark L. Prophet and founded ‘The Keepers of the Flame Fraternity.’ This fraternity was meant to quicken the works of the people who had originally come to earth with Sanat Kumara. These people were to serve as world teachers and ministers in the families, communities, and countries at the time of the turning of the circles. 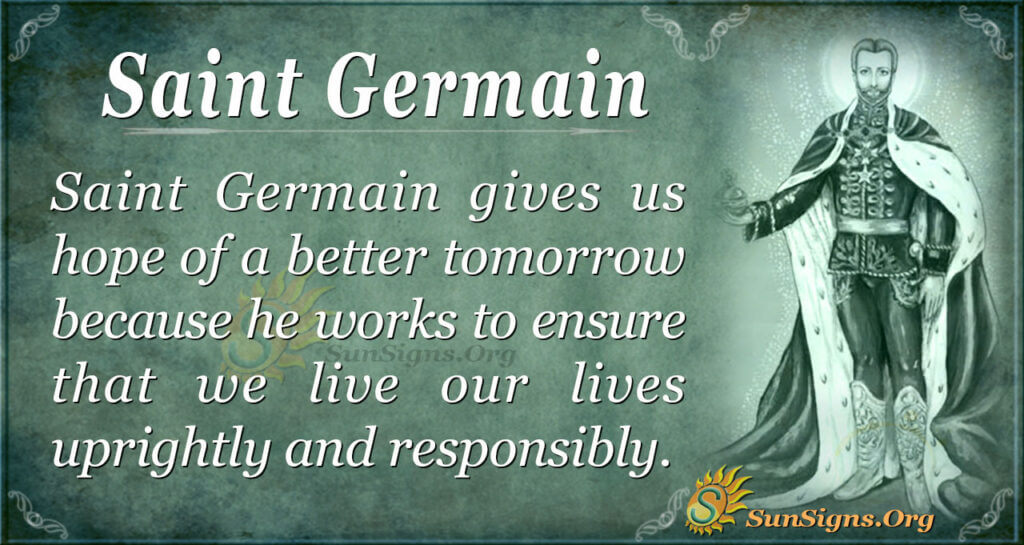 Saint Germain gives us hope for a better tomorrow because he works to ensure that we live our lives uprightly and responsibly. He wants us to become one with ourselves by living our truths.

Invoke this ascended master into your life by burning purple candles. He works to bring enlightenment to the world.