Helios – God of The Sun and The Solar System

Helios is the Greek Sun god. He is also the god of the solar system and as the deity of the Great Central Sun. He abides in the heart of the physical sun and works with Goddess Vesta to represent God to those present on the planets that orbit the sun. The God-consciousness that they possess sustains our physical solar system.

Sun worship prevailed in many communities in the past. People believe that the sun holds many powers that resonate with the Godhead. Helios is working with the energy of the central sun of the golden ray. He works to balance the flow of energy to all the planets that orbit the sun. His energy flows to humankind 24/7.

Helios works closely with God to ensure that the earth is protected from the effects of too much heat from the sun. Helios helps humankind on their ascension journey. The sun is the greatest celestial body of all. It is a mass of energetic activities in which God’s character is expressed. God’s self-expression focuses on all levels of spirit and matter.

Helios is depicted by many as a handsome young man who wears the crown with the shining aureole of the sun. He drove the Chariot of the Sun across the sky every day to earth. He used the chariot to circle Oceanus and returned to the East in the evening. In the Homeric Hymn to Helios, Helios is said to drive a golden chariot drawn by steeds.

The steeds that drew the chariot were covered in fire. They were named Aeos (He Who Turns the Sky), Pyrois (The Firey One), Phlegon (Burning), and Aethon (Blazing). Helios is a personification of the sun and the creative powers behind it. Most people worship him as the god of life and creation because of his relationship with the sun.

Many people associate Helios with the creation of the universe. People believe that he worked closely with the Godhead to create everything that exists in the universe. One passage recorded in the Greek Magical Papyri states that the earth flourished when Helios shone forth and made the plants fruitful when he laughed and brought to life all living creatures when he allowed the same to happen.

People refer to the sun as Eternal sunshine. The tide of the great sunlight comes into our world to reveal that God constantly supplies us with His mercy and gifts. When the wave of sunlight leaves, the time comes for us to express gratitude to God for all the blessings in our lives. It also signifies the urge for us to be one with Him. Helios reveals to us that he works with God to ensure that all humankind receives the joy, love, and happiness that he radiates.

Helios (The Lord of the Dawn) and Vesta (The Mother of Eternal Cycles) are the presiding gods of the solar system. They spiritualize the sun and provide protection to its evolution. They are representatives of the spiritual, great central sun, which reflects upon the earth’s physical sun.

Helios and Vesta make the energies of the sun available for all the living creatures on all the planets that orbit the sun. Helios serves of the Golden Ray while Vesta serves of the Pink Ray. They both represent the Hierarchy of Aries to the evolutions of the solar system. 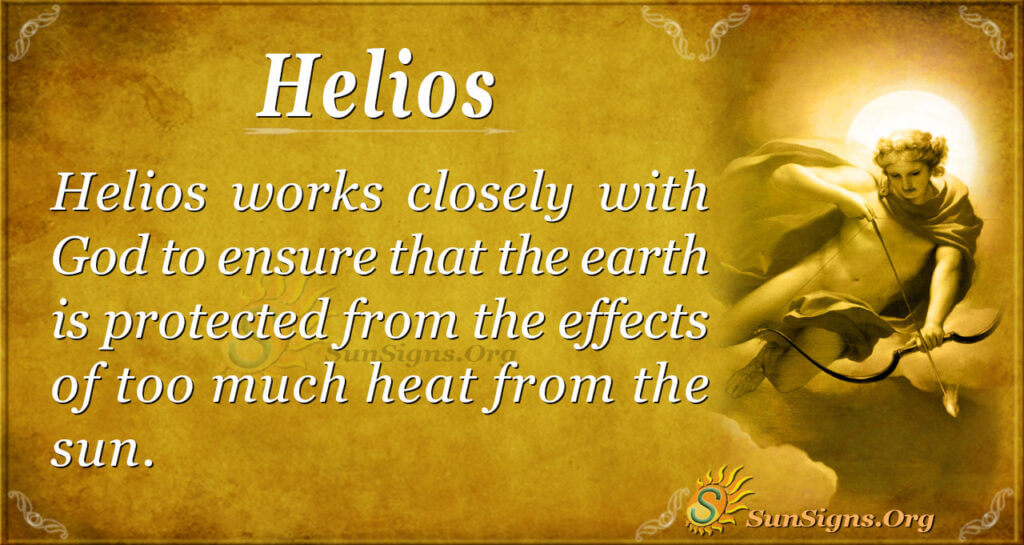 The ancient Greeks knew Helios as the sun god, and they worshipped him for his great powers and energies that he radiated upon the earth. Helios’ messages contain boundless joy, love, light and optimism. His messages give us hope and belief that everything happening on earth now is happening for a reason, and wonderful times are ahead of us.

Helios’ Role In Our Lives

Helios and the Messengers of the Great Central Sun work with God to exercise His control over the life that is flowing through us. God gives us life, and He wants us to put our lives into good use. We should use our lives to express His greatness and live according to His will.

God uses Helios to render his help to all the planets in the universe. The life that the sun offers to these planets comes from God. He informs us of the changes that will happen on the earth through our minds and hearts. He opens us up to the fact that the sun plays a major role in transforming our consciousness.

God plans all the changes that take place on earth. Only the sun will transform and cleanse the earth once some changes have taken place that affects all living beings. Helios makes us understand that we will experience the meaning of God’s mercy towards us over time.

He plays a major role in our lives. He ensures that we are in sync with God. Helios ensures that the solar system is in good shape and working according to God’s plan. His portal is Golden in color. To invoke Helios, you need to associate yourself with the Golden color because he serves on the Golden ray.

To experience the full workings of God in your life, you need to send love and supplication His way. God loves us, and He wants the best for us even if, at times, we stray away from his path. Helios and Vesta receive the light of the sun and lowers its intensity so that it is not harmful to the inhabitants of the planets orbiting the sun.

Helios resides in the Eastern edge of the Earth in his golden palace. On his Chariot over the earth, the rays of Helios pour onto the earth, giving the earth light, heat, and life. As the God of our solar system, he ensures that everything is working smoothly without any hitches.