Sanat Kumara – The Leader Of Humanity

Ascended Master Sanat Kumara is known as a Great Wiseman and a leader of humanity on earth. He plays different roles. Each role portrays a different facet of his divine nature. He is regarded and worshiped as one of the seven sons of Brahma in Hinduism. These are young men who remained pure. Hindu writings also describe him as an “Outstanding Wiseman” who recognized Brahman. In Sanskrit, the name means “Eternal Youth.”

God of Zoroastrianism, Ahura Mazda, is also known as Sanat Kumara. Ahura Mazda means “Lord full of wisdom” or “Wise Lord.” He symbolizes the principle of goodness because he is the protector of humanity and opposes evil. The Bible describes Master Sanat Kumara as “Eternal God” in the Old Testament.

Sanat Kumara in Hinduism and Buddhism

This ascended master is called Skanda or Kartikeya, the son of Shiva and Parvati in Hinduism. Karttikeya is the commander in chief of the gods’ divine army and the god of war. His work is to exterminate Taraka, the devil who represents the lower mind or ignorance. This master holds a spear to show illumination. This he uses to defeat ignorance. The Hindu religion uses war stories as metaphors for the internal struggles of the soul.

Also known at times as Skanda-Karttikeya, the master is said to be the God of Learning and Wisdom. He gives spiritual powers to those who call on him. Kumara fills them with the power of knowledge. He lives in the caves of their hearts; hence, the name Guha which means cave or secret one. The deep Hindu writings also portray Sanat Kumara as a knower of Brahman and the “foremost of sages.”

Brahma Sanam-kumara is a great god in the Buddhist religion. His name also means “forever a youth.” Brahma Sanam-kumara is held so high that for him to be seen by the gods of the heaven of the thirty-three, he must create an apparition body. He is compared to a figure that is made of gold and shines more than a human figure. This is because he shines more than other Devas in glory and radiance.

Sanat Kumara is one of the seven Holy Kumaras. He came to earth from Venus at a time when humanity had sunk so low. It was terrible that no one gave devotion to the god within. This ascended master is huge. We are not even comparable to a cell of his whole being. But regardless of all that, he is still working with humankind and helping us in our journey of ascension.

Sanat Kumara is here with us, to help us become great Divine beings and guide us to become one with our own inner Christ. He personally tells you that the inner Christ in you is your Light. This is what makes the term ‘Christ Light,’ a name that means I Am, Monad, or spark of God. Sanat Kumara also goes by the title, the Initiator. He brandishes the rod of initiation as we ascend past the 3rd initiation.

The aura of ascended master Sanat Kumara is clear like ice. All colors flash through it. There is his portal or painting that is also available as a portal card or portal print.  If we place this print in our rooms, it will be wonderful for him to send his energy day and night. We can also place the card on the chakra, and the master will send his energy directly into the chakras. 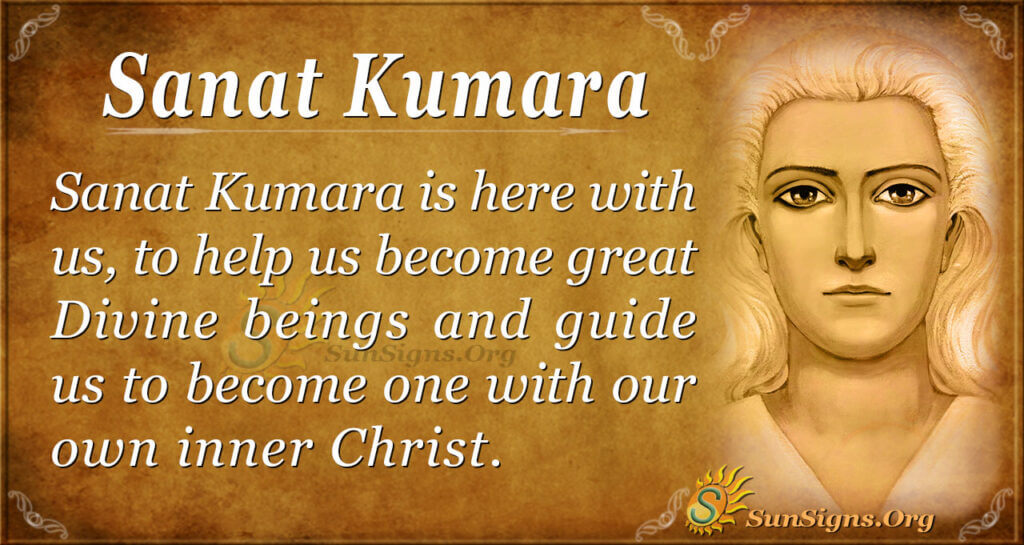 Master Sanat Kumara is the head of the Spiritual Hierarchy on earth. He is known by different names, that is, The Initiator, The Fountainhead of the Will, Youth of Endless Summers, and the Lord of the World. He is even referred to as The Ancient of Days in the Bible.

At a time when the Solar Logos was about to dissolve planet earth, Sanat Kumara voluntarily came to redeem this planet back to an evolutionary path. He is now working with Cosmic Master Vajrakilaya.