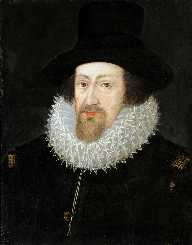 Francis Bacon was born in 1561 near London. His parents were Sir Nicholas Bacon and Anne Bacon. Francis Bacon as a child was often sick and weak, therefore initially he did not attend school, but was home-schooled. He started attending school only at the age of twelve, in 1573. He began attending the Trinity College in Cambridge, together with his brother Anthony. His studies were mostly in Latin. While studying in Cambridge, he had the opportunity to meet Queen Elizabeth.

He very soon realised that the scientific methods that were practised at the time were incorrect and imprecise.

In 1576 Francis Bacon entered “de societatemagistrorum,” later joined the English ambassador to go to Paris and continued his education there. He learned lots about politics in Paris, and then also other places in Italy and Spain. While he was traveling, he was doing diplomatic tasks and also studying. His topics of interest for studies were languages, civil law, and statecraft.

His father passed away in 1579, after that he decided to return to England. There he resided in Gray’s Inn, as he received only part of the money his father had laid for him. He was then supported financially by his mother.

Initially, Francis Bacon worked in Gray’s Inn, as he was declined to work in court. He started his parliamentary work in 1581 when he was elected an MP for Bossiney, Cornwall. Later in 1584 he worked for Melcombe and in 1586 for Taunton. During this time he worked on the paper about English church suppressing the Puritan clergy. Around 1586 he asked for the help of his uncle who had some influence in the parliamentary circles, and his career began to develop. In 1586 he started working as a bencher, in 1587 as a reader. In 1588 he read his first lectures, and also became the MP for Liverpool, and only a couple of years later, in 1593, for Middlesex. Then in his career, he also was sitting for Ipswich and Cambridge University.

His goal was to make the law more straightforward to understand. He had a significant influence on development and merging of England, Scotland, and Ireland into the United Kingdom.

As Francis Bacon became widely recognised, he started working as an advisor for Robert Devereux. Later he applied for the vacant Attorney General position in 1594 but was not elected. Similarly, he did not get the Solicitor General position in 1595. Although he was given a property in Twickenham, his financial situation was precarious and in 1598 he was even arrested for debt.

When he severed the contract with Essex, his situation gradually started improving. Essex was charged with treason in 1601, and Bacon was one of the people who investigated these charges. His statement about this was reviewed and called too “mild.”

When James I started the reign in 1603, Francis Bacon became a knight. After he worked as Clerkship of the Star Chamber, but still was unable to cover his enormous debts. In 1613 Francis Bacon started working as Attorney General. During his career, he prosecuted Robert Carr and his wife, Frances Howard for murder. Bacon had a high influence on the King, and therefore he was disliked in the parliament, so a law was introduced, that prohibited Bacon to sit in the parliament. Bacon’s career progressed nevertheless, as in 1617 he became a temporary Regent of England and in 1618 a Lord Chancellor. Later that year Bacon became the Lord Verulam.

Francis Bacon’s career was over in 1621. He was in debt and was accused of 23 corruption cases. This led him to be charged a huge fine of £40,000, and also followed by short imprisonment. These charges lost Bacon his seat in parliament. There was some speculation about whether Francis Bacon did accept some bribes, or not. It was known though, that although he took some gifts, he did not let them influence his opinion. Sometimes he had spoken against the people, who had given him such gifts. It is still not known if he was bribed or not. After this, he dedicated his time to writing.

Francis Bacon had not only a versatile work-life, but he had also his ups and downs in his private life. His first female friend was Elizabeth Hatton. Their relationship ended when she accepted the proposal of Bacon’s lifelong enemy Edward Coke. Later in life, he had admitted, that not marrying Elizabeth had been a great mistake.

When Francis Bacon was 45 years old, he married a fourteen-year-old Alice Barnham. Their wedding happened in 1606. Alice was not satisfied with the financial situation of Francis Bacon; therefore the relationship was not very stable. Their marriage ended when Bacon discovered that Alice had been having an affair with Sir John Underhill.

Even though Bacon had several relationships in his life and there is lack of evidence, some believe he was homosexually oriented.

Francis Bacon died in 1626 due to severe pneumonia. He died at the age of 65. He had no children. Therefore no one inherited his titles of Baron Verulam and Viscount St. Alban, and they became extinct.

Francis Bacon was not only a statesman, scientist, and jurist, rather also a philosopher, orator, and author. During his life, he wrote several publications and papers. Most of his work can be subcategorized into three categories: scientific, religious and juridical documents. Most famous of his works are Essays (1597, 1612, 1625), the Advancement and Proficiency of Learning Divine and Human (1605) and New Atlantis (1627).