Hilarion – The Teacher Of Everlasting Truth

Hilarion is the teacher of everlasting truth. He also teaches divine science, all physical and metaphysical sciences, and healing arts. Hilarion brings us to the path of truth. He serves on the fifth ray of the Chohan by keeping the flame of truth burning. He is associated with the third eye chakra as he reveals the truth to those who seek it.

The colors green and gold represent this ascended master. He also resonates with the gemstones emerald, diamond, jade and quartz crystal. His qualities are such as truth, science vision, and abundance. Hilarion lived between 290 and 371 BCE. He was the founder of Christianity in Palestine. He was renowned for healing, and hordes of people went to him for the same.

When we feel stranded, we can call on him for guidance, especially to be able to choose the truth and harness his energy for healing. We can easily heighten our vibration frequency so that we can tune into his frequency for healing and restoration in our lives.

His Values and Main Attributes

He was the highest priest of the Temple of Truth as he upheld truth in all his life endeavors. Hilarion serves alongside Pallas Athena to keep the flame of truth burning in the hearts of humankind. According to history, the flame of truth was anchored on Atlantis for a brief time before the continent sunk almost twelve thousand years ago. That forced Hilarion to shift the flame and remnants of the temple to the Temple of Truth, which is located in present-day Greece.

The truth became the focal point of all messengers who served under the guidance of Pallas Athena as the priestess of the temple. As such, a few black magicians attempted to corrupt the truth, and they successfully broke away with their perverted truth. The black priests were killed shortly after, and the Brotherhood of Crete withdrew its service because human beings were unable to distinguish between truth and falsehood. They were also unable to differentiate ascended masters from ordinary ones.

Hilarion is concerned with bringing the truth to our lives and guiding us to healing from problems and illnesses in our bodies. Through him, we are able to understand the sciences and medicine. Some of the career paths that he guides us through are engineering, being a doctor, mathematicians, and other paths that align with his service to humanity. He continues to serve us in the divine realm.

Hilarion lights the flame of truth in our lives; as such, he illuminates our paths, especially when we stray from living an upright life. We should call on him when we are on the quest to find the divine truth. After calling on him, we should clear our hearts of all doubts and internal resistance so that Hilarion may infuse us with the message of truth. This ascended master is gentle and only speaks to us if you are receptive. Hilarion resonates with the third eye, which implies that we should meditate, focusing on the area between our eyes.

Hilarion teaches us to shed off old identities and negative patterns. In the Bible, Hilarion lived as Saul, who persecuted Christians. One-day, God appeared to Saul in bright white light and asked him, “Saul, why do you persecute me?” Saul was shaken, but he followed God’s guidance to go to the city. He woke up blind for three days and did not eat or drink anything. Subsequently, he became Paul. He served God and lived according to his will thereafter. That reveals we can convert. 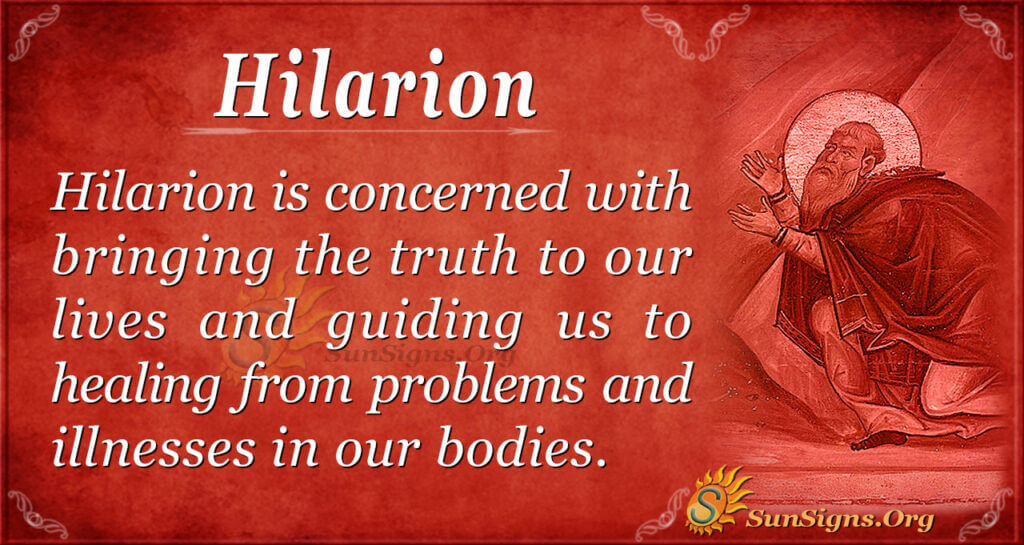 Hilarion’s Role in Our Lives

Hilarion uses light and spoken word to heal us with his light. As we meditate upon Hilarion, we will get to witness the green-ray, which restores vitality. We should not be happy when we hear a little voice accompanying the green-ray. The color green symbolizes health, and thus, we should be receptive to this green energy.

Hilarion assists us in becoming bold in sharing our truth. Through the different lifetimes, he was reincarnated as an ordinary human being who was able to accomplish extraordinary feats. We should be quick to act once truth dawns on us. That starts at the basic level, which is accepting our own faults and making amends. We should do our best to apologize and make things right with the people we hurt in the past.

This ascended master demonstrates to us daily how to use the living flame of truth to master ourselves and our day to day life. After conversion, Paul became a very passionate preacher who impacted a lot of people while he was still alive. We should, therefore, feel encouraged to impact other people around us by releasing shame from past actions.

When we accept the truth, we become new beings. That signifies our new beginning, and that instantly gives us the key to release the energy of being. Meaning we start a new life with a new name on the path to realizing our higher selves. This ascended master reveals to us that conversion is all about what we are willing to do after we decide to be more intentional in our lives.

Hilarion teaches us about converting our hearts through being intentional about our actions. He also reveals to us different ways we can show intentions for him to guide us in living our truths gently but firmly.

Hilarion works with the Brotherhood of Crete to consistently draw our consciousness into a deeper appreciation of the spectrum of Truth. He encourages us not to settle for partial knowledge because it denies us the opportunity to have a wholesome view. Which also means we could be vulnerable against teachers of darkness.

This ascended master teaches us to be patient as we seek the truth. He reveals that conversion and change of heart and mind are a process. As such, we should not feel pressured to rush the process in a bid to experience results.

We can visit the Temple of Truth, which is located in present-day Greece, to meditate and connect with Hilarion.