El Moreya – The Master of The Ray Of Divine Will

Ascended Masters like El Moreya are those who were once human beings like us, but they have managed to pay all their karmic debts and subdued ascension. In a deeper sense, ascension is where you are able to live as your higher self and move beyond karma.

El Moreya walked the earth as a human being, but he was able to live upright and clear all his Karmic debts, therefore, mastering ascension. El Moreya had a passionate love for the will of God. He religiously lived up to God’s will one lifetime after another and later came to embody the value of obedience.

Today El Moreya serves from the divine realm as Chohan of the First Ray. The First Ray is the blue ray of God’s will, faith, power, and protection. Though many people might not know El Moreya, they have heard about his past lifetimes.

Abraham was commanded by God to leave him home and venture into a new land. God promised blessings for Abraham’s obedience. God also promised that he would bless him with a son. He later sired a son named Isaac. God called Abraham Father of the nations. Abraham was El Moreya.

El Moreya reincarnated in many other lifetimes. In Camelot, El Moreya appeared as Arthur who created the ‘Table Round’ which was a brotherhood that was focused on bringing justice to all. Their slogan was “All for One, One for All.” Arthur’s soldiers fought bravely and were of service to the monarch and his kingdom. King Arthur created a kingdom that upheld justice, human dignity, respect, and truth in the mystical Camelot.

In the twelfth century, he was embodied as Thomas Becket, who was both the chancellor of England and Archbishop of Canterbury under Henry the second. He defended the church against being involved in political issues because of its influence on society. Thomas Becket was killed within the church environment by four knights who were executing the King’s orders.

Three centuries later, he came back as Thomas More, chancellor of England. The same conflict aroused, and he got into loggerheads with King Henry the third. Thomas More was sentenced to prison and later to death by decapitation. El Moreya is an embodiment of a principled human.

El Moreya consistently upheld the same Godly values through many other reincarnations. He lived as a principled leader during the era where he stood up against both King Henry the second and the third. He fostered brotherhood when he lived as Akbar, the greatest ruler of the Mogul empires.

El Moreya teaches you how to live a life that is fully surrendering to God’s will no matter the challenges. He also teaches you the essence of committing to living your truth and paying any karmic debt. His blue light helps you strengthen your faith and power as you walk on earth. 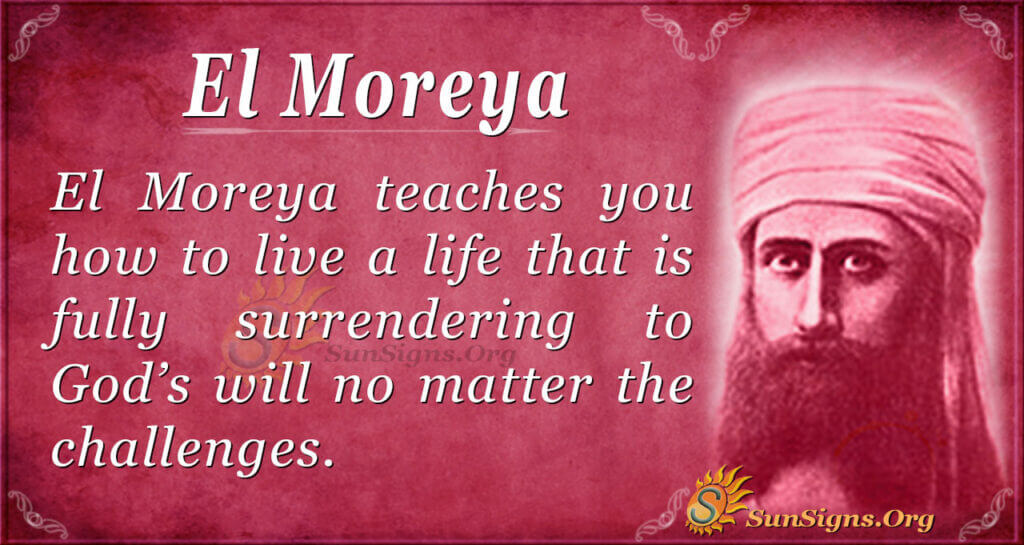 The Roles El Moreya Plays in Our Lives

El Moreya teaches us that without commitment to the will of God, we cannot exercise proper discipline in other areas of life. As such, he guides individuals who have consciously or unconsciously gone against their inner nudging. He illuminates the path for them to be able to journey back to their truths. As such, you will be able to develop your own relationship with the Creator.

Since the will of God is within you, El Moreya teaches you that rebelling against God is rebelling against your true self. Jesus teaches that a house divided cannot stand. That is a parable in the Bible. Through that school of thought, it is easy to relate to your current life. Meaning, you should aspire to reconnect to your true self through spiritual growth. Your guardian angels work with other beings from the divine realm. You should heed their guidance and adjust your life accordingly.

El Moreya is one of the Chohans. The name “Chohan” is a Sanskrit word that means, Chief or Lord. It refers to someone who works with humanity after ascending. El Moreya reveals that many people desire to know their life’s purpose; however, they do not wish to know how it relates to the perfect will of God. There is no way of separating your higher self from Godly truths and God’s will. You should strive to make peace with that fact.

This Ascended Master is a great leader because he brought about advanced policies to the Mogul empire in India. He was an amazing organizer and administrator to the territories under him. Some of the most outstanding things he did were ending extortion and oppression of the poor in society. He also showed a lot of compassion to the many religions and faiths in India.

El Moreya was committed to the will of God without questions or hesitation. He is a role model to many who wish to live such an upright life that pleases the Creator.

El Moreya was concerned about how the government interacts with the citizens. He always commits to promoting equality. No wonder he made such crucial changes to the rules and policies of the Mogul Empire in India, which made life much easier for the citizens. He was an agent of change on earth, and he did not shy away from challenging the status quo.

You should take inspiration from El Moreya to find your higher self. Release any fear, doubts, and insecurities that you might struggle with. Instead, open up your heart to his shining light and accept his teachings on how to live an upright life. You should strive to live your utmost truth daily and be excited for the many wonderful rewards that the Creator has in store for you.