Ascended Masters: Who Are They And What Do They Do?

Mostly you will encounter the word Ascended Masters when you are reading about ascension and spiritual matters. Ascended Masters are those who once walked the earth; they were human like us, but paid off their Karmic debt and mastered ascension. To understand who and what they are, you need to know what the words ascension, Karma, and reincarnation mean.


Karma is the Universal Law of Cause and Effect. In Physics, it is known as Newton’s Third Law, which states, ‘For every action, there is an opposite and equal direction.’ You should know that whatever you project to the universe is going to come back your way somehow. Not everyone becomes an ascended master after death because we may have left the physical world without paying off our karmic debts.

Reincarnation is the spiritual belief that once we die, our souls are reborn into other physical forms to continue dealing with the Karma we have been built up from the previous life we lived. Our reincarnation cycle depends on the amount of Karmic debt that we have acquired during every lifetime.

Ascension, on the other hand, is a process of moving beyond the karmic cycle. To ascend, you must pay off all your karmic debt so that you do not reincarnate in another physical form in your next life. To ascend is to merge with your Higher Self. Your Higher Self is the part of you that is outside your physical self.

Ascended Masters are Divine beings who have merged with their Higher Selves and no longer have a physical body. They are not like other spiritual beings, like angels and spirit guides, because they were once human and can relate to the frustrations of the karmic cycle. This explanation points to the fact that we are all Ascended Masters in the making.

These Masters are knowledgeable and understand the mysteries of the world; therefore, we can consult them on some aspects of life that we do not understand. They have lived through the reincarnation cycle and experienced the great power of higher dimensions. They work with humankind to guide us through the stages of ascension.

Other people define Ascended Masters as great teachers, prophets, and healers who have lived as humans and who are now in the realm of spirit. They come from every race, all religions, gender, cultures, and civilizations. They have worked with and continue to work with humankind while offering us the guidance and assistance that we need to get through life. 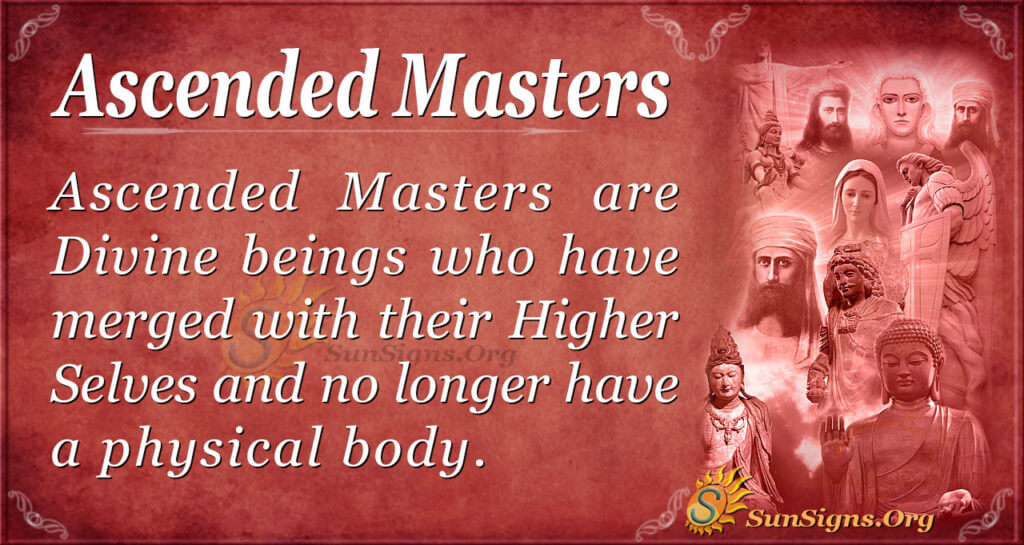 Some of the Ascended Masters known to humankind are Sananda, Serapis Bey, Lord Kuthumi, Buddha, Lady Nada, Lady Mary, Sanat Kumara, and Melchizedek, among many others. They are spiritual beings who have gone through enlightenment and serve as teachers to humankind.

Ascended Masters come to the aid of everyone no matter what race, religion, or culture they belong to. They are in a position to help as many people as possible because they transcend time and space.

They inspire the people under their influence who seek spiritual awareness, guidance, and uplifting. You must invoke the presence of the Ascended Masters if you want them to help you.