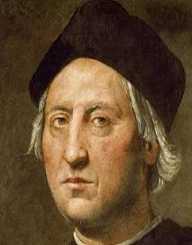 Early explorer Christopher Columbus sailed under the Spanish flag and was born in Genoa, Italy in 1451. His father was a wealthy Italian wool merchant. When he was a teenager, Columbus went to sea working on a merchant ship.

Then in 1740, the ship he worked on was attacked by French pirates off the coast of Portugal and sunk. Columbus managed to get to shore and eventually landed up in Lisbon, Portugal where his brother his Bartholomew worked as a cartographer. During this time he made and sold maps with his brother.

Having gone to sea at the age of 13, Christopher Columbus had been taught how to sail wooden ships with sails, read the winds, negotiate the tides and celestial navigation and was a master mariner. In Portugal, he studied astronomy,  mathematics, and navigation and became interested in the idea of exploration and mapping new lands which was taking place during the Renaissance in Europe.

After Christopher Columbus conceived the idea of sailing west across the Atlantic to reach Asia, he sought financial help. He failed to impress Portuguese and English authorities with his plans.

The Spanish monarchs Isabella of Castile and Ferdinand of Aragon were more receptive to his ideas, and they agreed to fund his voyage. The contract was that he would retain 10 percent of any bounty, a title, and governorship of a place of his choice. In return, the Spanish monarchs were looking for new lands and people to rule, gold and spices.

Christopher Columbus left Spain on the 3 August 1492. The fleet consisted of three wooden ships: the Nina, the Pinta and the Santa Marie with a crew of under 100 men. They used a compass to navigate and a traverse board to plot their route. Early maps had been deceptive, and the Atlantic Ocean proved to be much more extensive than Columbus had anticipated.

On the 12 October 1492, the land was sighted, it was an island in the Bahamas, and he named the island San Salvador. He met the local people, Arawak and Taino Native Americans, calling them Indians as he thought he had reached Asia.

Christopher Columbus went on to Cuba and Hispaniola and founded a settlement La Navidad. Leaving 40 men behind at the settlement and taking a few indigenous people back to Spain, Columbus returned home to a hero’s welcome. He brought home with gold, the newly discovered tobacco plant, turkeys, and pineapples.

In September 1493, he left on his second voyage, this time with a fleet of 17 ships and over a 1,000 men, including farmers, soldiers, and priests. Upon his return to La Navidad, he found that the men he had left behind had all been killed. His third voyage began in 1498 when he left Spain with six ships, visiting Trinidad, Venezuela and he started the exploration of the mainland of South America.

At this stage, Columbus still believed that he had reached India and went by the title of Viceroy and Governor of the Indies. Around 1500, Columbus was accused of tyranny and being intent on the personal financial gain.

Christopher Columbus lost his governorship, was arrested and returned to Spain in chains where he was jailed before being pardoned. Still intent on finding a westward passage to the Indian Ocean, his fourth and final voyage took place in 1502.

Christopher Columbus visited Central America including Honduras, Nicaragua, Costa Rica, and Panama and was then stranded in Jamaica when the ships deteriorated. After being rescued in 1504, Columbus returned to Spain but his health had failed, and he died two years later. He had lost his governorship and all riches associated with his voyages.

In 1749, Columbus married the daughter of a Portuguese nobleman, Felipa Perestrello. The couple had a son Diego. And in 1480, he had a second child, Fernando, with Beatriz Enriquez de Harana. Christopher Columbus died in 1506 at the age of 54.

In the United States, the second Monday of October is a federal holiday celebrated as Columbus Day. This holiday marks the anniversary of Columbus’ 1492 arrival in the Americas and his discovery of the New World on behalf of the Spanish monarchy.

Some view the voyages of Columbus as the opening up of the Americas to slavery and exploitation.