Melchizedek is a former representation of the Godhead on earth. His Twin Flame is the Queen of Light. It is believed that he governs the Shamballa, that is, the Great Light Realm, which is over the Sahara Desert. From his throne, he oversees the affairs of the earth. This ascended master is also in charge of all Sacred Geometries.

He is a First Ray master. The First Ray is the silver, blue, and red ray of God’s will and power. This should not be confused with the Melchizedek Priesthood, which is a 7th Ray order. Melchizedek is a teacher to all persons who were previously initiated into the Melchizedek Order.

He is in charge of all Sacred Geometries and oversees there return into the consciousness of humankind. He gifts humankind with the Star of Melchizedek, which enables us to appreciate the oneness of life. His heart flame is the All Christ Flame of Eternal Power and Cosmic Purity.

Melchizedek uses his heart flame to ensure that no harm comes to us. He protects us from negative energies and urges us to live positive and optimistic lives. He urges us to work on our spiritual life by seeking enlightenment and awakening.

Melchizedek is the one who came up with the idea of the House of David. He passes wisdom and Divine knowledge to the people that are under his influence. He embodies the complementary Father energy, just like Lady Mary embodies the Mother Energy.

Melchizedek’s Role in Our Lives

Ascended Master Melchizedek helps us to gain courage, confidence, willpower, and strength to overcome the challenges in our lives. He works to make things easy for us after going through a tough time in life.

He enables us to work towards getting in touch with our higher self and living life according to God’s will. During meditation, he appears to many people as an older man with flowing thin, white hair, and beard.

His posture is a serious one, and he always wears white. Many people believe that he many have reincarnated as Jesus Christ in the past. His symbol is the Maltese cross. The cross is a representation of the four planes of matter and the mastery over all of them. As humans, we need to master the mastery of the four planes of matter for higher initiations. 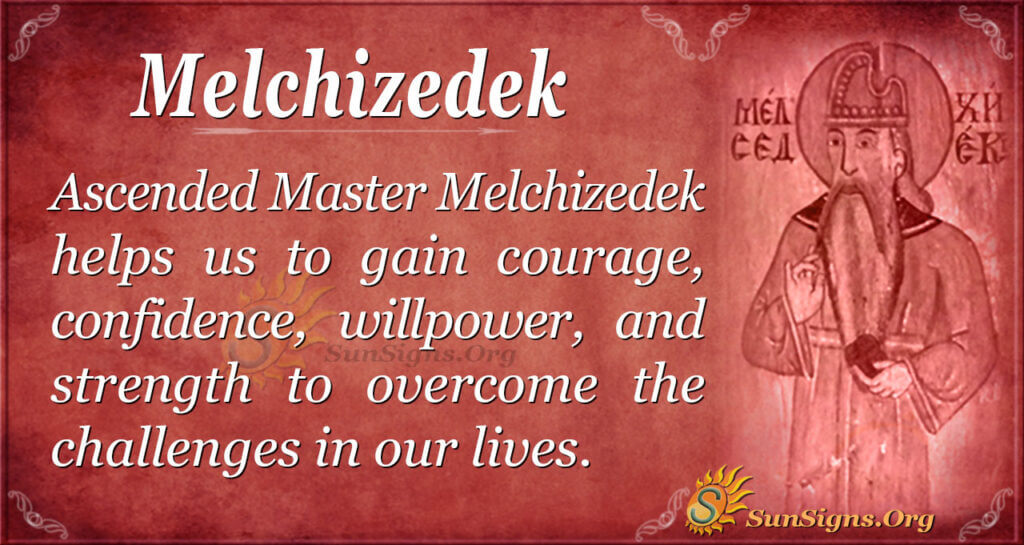 Currently, Melchizedek is working with Arcturus, Elohim of the 7th Ray.

He serves as the Chohan of the Second Tier of the Indigo Ray. People celebrate his ascension anniversary on November 11th. Melchizedek’s energy flows into our lives 24/7.

We need to listen to him to bring enlightenment into our lives.