Lady Vesta – The Goddess Of The Home And Hearth

Lady Vesta was the Goddess of the home, hearth, and family life in the Roman religion. The Greeks recognized her as Goddess Hestia. She was born the first child of the Titans Kronos and Rhea. Like all other children, her father swallowed her. Her brother, Jupiter, managed to escape his father and so he was not swallowed. He later released his siblings from the bondage of his father.

Lady Vesta was released last because she was swallowed first. Due to this fact, Vesta is both the oldest and the youngest of the gods. She was a beautiful being who attracted many suitors. She was sought after by Apollo and Neptune, but she turned down their advances and begged her brother, Jupiter, to allow her to remain a virgin forever.

Jupiter agreed to her suggestion and made Vesta a happy woman. Lady Vesta took care of his hearth and home. She became centered on domestic life and how to make everyone feel at home while she was around. She took good care of the home and hearth, impressing many who associated with her.

In Roman history, the hearth was not only meant for cooking and heating things, but it was a place where family members gathered and spent time together. The hearth in Rome was a hub of activities to the extent that the fire that burned there was important to the Romans. Sacrifices to the god of the home were made at the hearth and thrown into the burning flames.

People valued the hearth so much that they would carry flames from the hearth when going away on a trip in order to be close to family. The Romans believed that Lady Vesta played a major role in keeping the home fires burning in every sort of home.

In the Shrine of Vesta, there was a fire that kept on burning throughout. The fire was tended to by the Vestal Virgins. The fire was renewed every year on March 1st. The temple was not open to the public save for during Vesta’s feast days. The feast days were known as Vestalia, which ran from June 7th to June 15th. During this time, matrons would be allowed to visit barefoot and in humility.

After the Vestalia, the temple would be swept clean, and the dirt collected disposed of in the Tiber River or a spot in the city that had been agreed upon. Vestal virgins were expected to remain at the service of Lady Vesta and chaste throughout their tenure. If any of them failed, the punishment meted upon them was being buried alive or having molten lead poured down their throats.

Lady Vesta is described as a fully clothed woman accompanied by an ass. The ass was her favorite animal. Being the Goddess of the Hearth, she was also the Patron Goddess of the bakers of the city. She is also depicted as holding a kettle (Sign of the Hearth) and cut flowers, as a symbol of domesticity.

Vesta was of great service to women, although she associated with both genders. She took care of and maintained the homes of the citizens of Rome. Of all the Roman gods, only Vesta was given the honor of full-time clergy devoted solely to her rights. The Vestal virgins tended to the perpetual fire in her temple and tended to her hearth as a sign of gratitude for her service to others and care of the people. 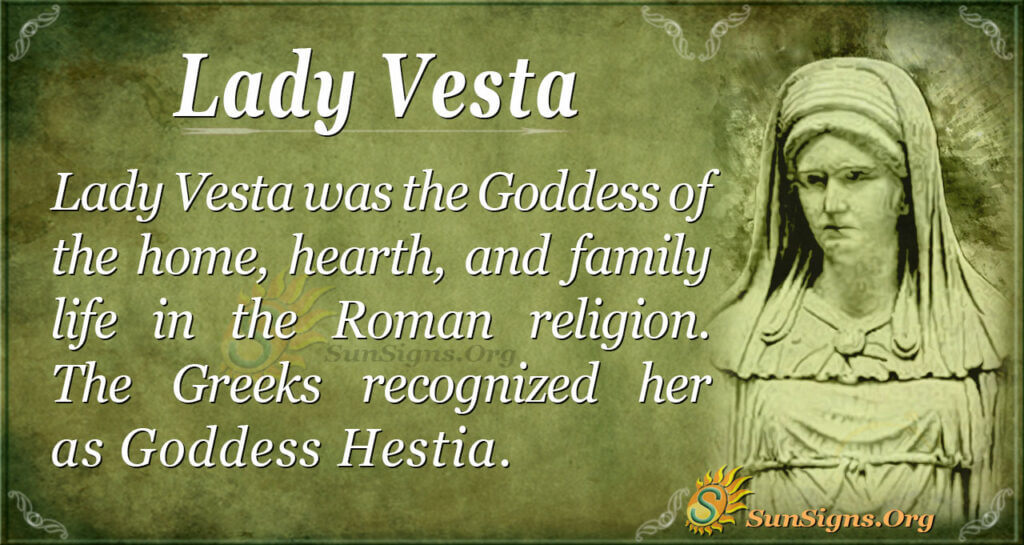 Ascended Master Lady Vesta brings warmth and love into homes. She ensures that the family unit was respected, cared for, and valued.

Vesta works on the Third Ray, the ray of unconditional love. Her aura is pink with a funnel of gold at her crown and with a touch of white.

Vesta is depicted as having long, black hair tied back to the Roman way. Her spirit is felt to date because of the roles that she plays in bringing families together and maintaining the serenity of the home.