In astrology, and in other general types of pseudoscience there are generally said to be four basic elements that make up the planet earth. These four elements are earth, water, fire, and air.

These elements have their own literal and symbolic meanings which are often used in astrology as well as ancient studies like alchemy.

This article will discuss the symbolism of the fire element, which zodiac signs fall into the fire category, and how the fire signs interact with the other elemental zodiac signs.

It should seem obvious that one of the things that the fire element symbolizes is destruction. You hardly ever use fire to create. Strangely enough, fire is also is symbolized by creativity. Fire is a highly active element. We can see the literal fire flickering in the night. The fire also symbolizes light and passion.

Without fire, we wouldn’t be able to see at night or in hidden places like caves. It helps us to see when we normally would not be able to. The passion aspect may come from fire’s real ability to produce heat. This heat also adds to the creativity symbolism because without heat we would not be able to make creative new foods or weld things. One of the fire’s biggest symbolism is energy, both in a literal and figurative sense. 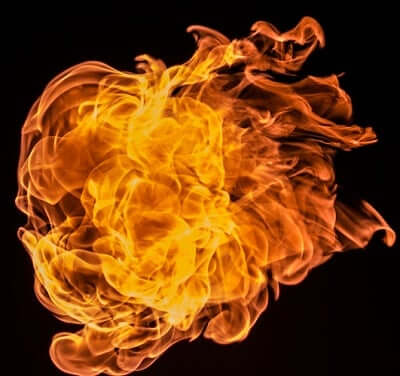 There are twelve zodiac signs in astrology. Since there are four symbolic elements, there are three zodiac signs for each element. The signs in the fire element are said to carry many of the symbolic traits of the fire element. These three signs are Aries, Leo, and Sagittarius. These signs are the most likely to be passionate, creative, as well as destructive at some times.

Fire and water may seem like total opposites in the literal sense, but in the symbolic sense they can work well together. Fire is a creative element, which can help water signs to more easily accomplish their goals. Water is also said to be full of emotion, which fire can easily relate to because of its passion. Of course, at times these star signs don’t get along the best because of the literal reactions that happen when fire and water meet.

Fire and air together make a great creative team. The air sun signs can keep the fire signs motivated while the fire signs keep the air signs feeling creative. In the real world, you need air to make a fire bigger, and this is how it works in the symbolic sense as well. A little bit of influence can make fire signs glow brighter, but too many interactions with air signs can “blow out” or just exhaust a fire sign.

Fire is sometimes too creative for its own good. They need someone to help to keep them focused, and earth is just the element for the job. While earth signs can be a bit boring on their own, fire signs can help to make their lives more exciting. These two astrology signs are great at working together, but they might not make the best of friends because their personalities are just bound to be too different for things to work out.

Two fire signs together are bound to cause some sort of trouble, but because they are so similar they are bound to have a great time together. These signs are creative and fun, but this may mean that they may not get a lot of work done when they are around each other. This is like the opposite of the relationship between fire and earth. Two signs of the fire element are likely to make great friends, but poor business partners.

If you want to learn more about the four elements or zodiac signs then you can read more articles like this one here on SunSigns.Org.