Native American sun meaning signifies that you will soon celebrate the good work that you have been doing since a young age. In other words, you have to welcome great things in your life because you have been persistent in doing the right thing. Perhaps, life is not risky because you understand how to take your moves. Basically, you will live to become a great person. What you did in the past has given you the light to see other great things. Equally, you should be delighted for having the presence of the sun in your life.

We know that the Native Americans were deeply spiritual people who communicated their history, beliefs, and ideas through symbols found in nature. They created specific geometric depictions to describe and express these beliefs. The sun was of particular symbolic significance to all of the Native American tribes, as it is one of the natural phenomena that govern all of life. Symbols of the sun are seen in some way, shape, or form in each and every tribe, which should further demonstrate how its power was revered.

However, the specific views and beliefs regarding the sun and its symbols vary according to the tribe and its respective region. There were and continue to be so many tribes of Native Americans, meaning it is only really possible to generalize the most common meanings accepted by the majority of them.

Across these cultures, the sun’s symbolism is depicted in a variety of ways and is appreciated for the many purposes that it serves. In addition to being the sole provider of light and heat, the sun facilitates the growth of plants for food. Without it, we could not eat. Native American tradition also views the sun’s ray as signifiers of the cardinal directions, North, South, East, and West. 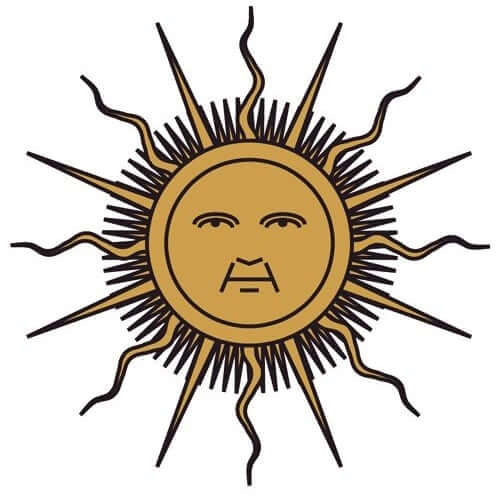 The following are some of the more common Native American symbols for the sun and their respective symbolic meanings.

In Abenaki myth, the sun is identified as the solar god named Kisosen, meaning “sun-bringer”. Kisosen was depicted as an eagle whose open wings signaled the daylight while closed wings created the night.

The Lakota Sioux tribe referred to the sun god as “Wi”, who was symbolized by a bison in the wild. They viewed this god as one of the supreme beings in all of existence. Tribes of the plains region also participated in a ceremonial sun dance each year to honor the summer solstice.

Any warmth you feel in your life indicates that you are doing the best thing in your life. Basically, you need to associate yourself with good people who have already felt the warmth of the sun.

Perhaps the most common symbol among all Native American tribes is the sun with curved rays that form a swirl. Oftentimes, tribes draw seven rays projecting from the circle to symbolize the seven centers of energy within all human beings. In regards to this symbol, the sun is viewed as both a healer and a peace-lover, radiating light from a powerful entity outward into the world.

Navajo culture portrayed the sun symbol as circular with rays projecting from the edges, as well. In fact, this appears to be a pattern found across all Plains tribe’s artwork. These groups used the sun symbol to commemorate heroic events and to record stories, such as during times of war. Additionally, they are connected to creation stories.

The Hopi tribe gave us a pair of iconic symbols that personified the sun, as well. Both present a face with varying sized, colored, and shaped rays. One, with longer and thicker rays, was viewed as the beholder of natural creative energy. This god governed the Earth’s ability to grow corn and sustain other crops. The other Hopi symbol, with rays emitting in threes, represented the Kachina spirits, which controlled life’s invisible forces. The Kachinas were supernatural messengers sent from the supreme gods to ordinary people. As a symbol, this picture signifies growth and life and the strength of the human spirit.

Kwakiutl tradition portrayed their sun with a less-than-friendly face. Their legend claims that the Sun was a chief that inhabited the sky, descending to Earth via its long rays. By their interpretation, the sun was a symbol of living an abundant life filled with warmth, healing, and peace. Specifically, when you see the light then you will see great things that will happen in your life. Thus, it is your responsibility to focus on things that will bring light to your life. Notably, when you do the right thing then you will never see any darkness in your life.

The Mayan sun symbol is the only one (on this list, at least) that does not depict a face with emitting rays. Rather, this symbol is only of a series of circles in the formation of a face with a long rectangle projecting from the mouth. They believed that the sun was significant of ascension, clarity, and a refined sense of awareness. By focusing on this symbol, the viewer was actively taking steps toward enlightenment. This could be because of the sun’s strength or the fact that it showed itself during the time of greatest productivity during the day. In thinking of enlightenment, the Mayans believed that the sun would bring about intellectual productivity.

Native Americans continue to symbolize the sun on numerous objects such as totem poles, instruments, and clothing, and even have them printed on their bodies as tattoos. Of all the symbols, the sun seems to be the most crucial and timeless, acting as a guiding light for all of mankind.

God is the producer of the sun. In other words, when you see light in your life then God is around you pushing you to do something great. Besides, excellence comes when you focus on your spiritual path. More so, your actions will decide your relation with God.  Actually, your life will forever change when you see the light in your life. Equally, the concepts you have about a spiritual path will give you a better foundation for a greater future.

Sun symbolism signifies that you have to use your wisdom to process ideas that will help you achieve your dream life. More so, your patience will pay you big if you exercise it always. Besides, things are working according to your planning. That means you will soon see the presence of the sun in your life. Just keep going and things will change for your better. On the other hand, your hard work will give you a certain pace that will bring light to your life at an early stage. Equally, be holy and the sun will light your world.