The Celts’ strong connection with symbolism and spirituality has been passed down through legends and tradition. Every plant, animal, and deity is paired with its own unique symbol(s) and details that form an emblem. Like other ancient cultures, the Celts used stories to continue their history and beliefs through an oral tradition. Specifically, they used tales of gods and goddesses, heroes and heroines to inspire their fellow people to live righteously, have courage, and pay homage to those who required it (the divine).

In doing so, they felt truly connected with the both the natural and the spiritual world around them. Stories that seem to have direct connections and implications for our own lives certainly have a longer-lasting effect. Thus we can relate to the characters involved and the trials and tribulations they experience. The journey of the character seems to mimic our own journey, and thus the symbolism presented along his/her path become relevant to our own lives. It was in this manner that the myths, legends, and most ancient symbolism in Celtic tradition came to be and have continued to prevail. 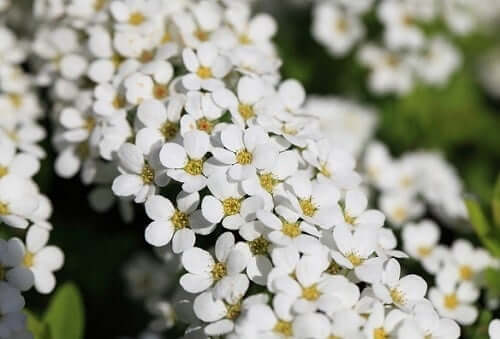 Blodeuwedd is one such character. She is worshiped as the goddess of spring and flowers. Often depicted with owls as a sign of her innate wisdom, Blodeuwedd, which means “flower face”, was conjured by magicians who were tasked with creating a wife for Lleu Llaw Gyffes, a key character in the literature of the Fourth Branch of the Mabinogi.

The magicians formed her using nine types of blossoms – oak, meadowsweet, broom, cockle, bean, nettle, chestnut, primrose, and hawthorn – after Lleu Llaw Gyffes’s mother cast a curse upon him, preventing him from ever taking a wife.

According to the tale, Blodeuwedd was not only unfaithful to her husband: she was also treacherous. She and her lover, Gronw Pebyr, killed the vulnerable Lleu by tricking him into assuming the only pose in which he could be harmed. As punishment for her crime, the same magicians who created her in the image of beautiful flowers transformed her into an owl after she escaped death.


Legend states that she has forever remained in this form, mourning the loss of her love. As the white goddess of both life and death, she serves to remind the Celts (and everyone else who looks to her) of the fragility of relationships. Her main message, though, is a common theme across the world: beauty is only skin deep. Blodeuwedd demonstrates that outer, physical beauty is only temporary and that in order for the spring blooming to occur, death in autumn and winter is essential. All of natural life must go full circle.

There are several specific items that are used to symbolize this Celtic goddess Blodeuwedd. The first that we will look to is the tree that Blodeuwedd was created from: the oak. The magicians Math and Gwydion blew the pollen of an oak into her as the breath of life. This is fitting, as the oak was always considered a powerful signifier of physical and mental influence and strength, stability, and life. It was a chief among trees for its massive size.

Although the oak was chosen as her breath of life in order to instill faithfulness and a long life with Lleu, it failed in that respect. However, it is still accepted as symbolic of this moral: no matter what is set in place for us, we are the ultimate deciders of our path.

Blodeuwedd was also brought to life using the beautiful Meadowsweet flower. This was thought to bring all of the intended goodness to the goddess, such as grace, softness, elegance, and subtlety. It was commonly used the bridal bouquet, after all. Math and Gwydion were hoping for a harmonious union between Blodeuwedd and Lleu. Although the goddess did indeed develop some of these qualities, she ultimately met her demise through lust.

The essence from a bold yellow Broom flower was also used in her creation. This flower was quite handy and thus symbolized a sense of household orderliness. Understandably, the magicians wished to provide Lleu with a proper wife who would take care of his household in addition to providing light and vitality to his life. The Broom flower is a great Celtic symbol of resourcefulness in both a physical and spiritual sense. By using it, we are reminded of the most basic and simple values that we often forget.

Lastly, the white owl is perhaps the ultimate symbol of Blodeuwedd, as it has been her physical manifestation since her demise. This transformation is symbolic of a change from light to darkness, from living in the warm rays of the sunshine to becoming an eternally nocturnal creature. Her transformation was neither pleasant nor easy, but it does serve to represent all things that come alive during the night.

Thus, Blodeuwedd’s limited vision was expanded and she was enabled to see the larger picture, that which goes beyond what is easily illuminated in the light. For humans, the Celts interpreted this as bearing hardship in order to gain insight into all aspects of life and death. With greater perspective comes greater wisdom.