Amongst zodiac compatibility, Leos make excellent lovers and pamper their partners to no end. Leo is a gregarious person who is highly expressive about his feelings. He is a natural leader and flourishes on motivation and tributes from his partner.

When it comes to Leo compatibility in relationships he or she expects a continuous dose of interest, security and attention from his love mate. He is highly passionate and will give back whatever affection and admiration he gets from his lover.

Leo is compatible with Aries, Leo, Sagittarius, and to some extent Gemini. Leo cannot get along with Capricorn, Taurus, Cancer, Pisces, and Virgo. 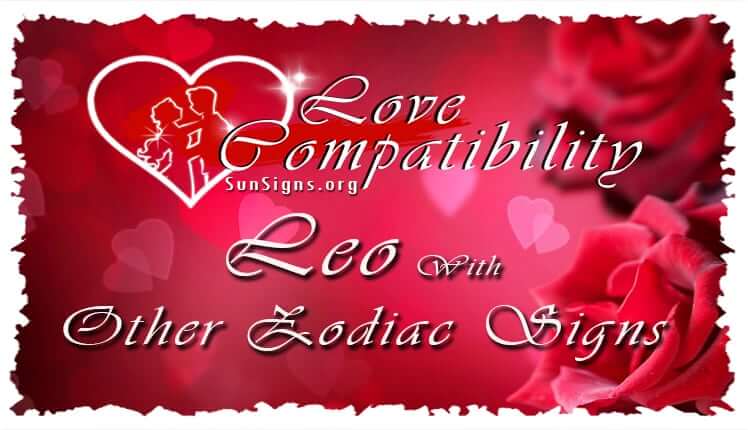 Leo is charitable and Aries loves freedom. Aries does not interfere in the activities of Leo and Leo appreciates independence of Aries sun sign. Aries is attracted by the charming personality of Leo. They have similar approach to life. If they can control their pride, compatibility between the two zodiac signs will be great.

Sociable nature of Leo man matches the adventurous nature of Aries woman. Leo is attracted by the intelligence and energy of the Ram. She is bowled over by his affection and big heart. Aries woman guards her self-esteem. Leo man bestows her with faith and affection. The zodiac compatibility between the two is nearly perfect.

Leo woman and Aries man generate thrill and exhilaration together. Aries man wants to explore and Leo woman will join him willingly. She looks for admiration from everyone around her. The relationship will always be in the public eye and this Leo compatibility will be very high.

Ability to take decisions and strong will power are the common traits in Leo and Taurus star signs. Both are physically attracted towards each other and are affectionate. The Lion and the Bull are full of life and bounce with energy. Leo seeks admiration from people they meet where as Taurus is comfortable with his family. Problems in relationship may arise because of this.

Taurus woman is self-centered while Leo man looks for public appreciation. This may impair her pride. She has to control her ego and accept the Leo man for a lasting relationship. Leo man showers her with dedication and romance which Taurus woman will be happy with. Love compatibility is acceptable between the two.

Leo woman and Taurus man enjoy their relationship and are very passionate. Compatibility is high because of this bonding. On the flip side, Taurus man is stingy while Leo woman will be pleased if he spends money on her. This is a minor issue.

Leo and Gemini are happy in each other’s friendship and are fond of exploration and excitement. Gemini has diverse interests which may make Leo jealous. Leo is on the look out for an enduring relationship while Gemini sun sign seeks new pastures. Gemini may hurt the Leo by his blunt talk.

Both the astrology signs are sociable and like to mix with new people. Gemini woman loves his wit and Leo man likes her courageous disposition. This Leo compatibility has lot of love and romance. Astrology compatibility in this Leo relationship can be sustained if they support each other without any confrontation.

Both Leo woman and Gemini man seek admiration and attention from others. There is never a dull moment in their relationship. The Leo compatibility with the twin is of a very high degree. The Leo female has to change her doubting nature and the Gemini man has to avoid affairs with other women. She has to be more loving and trustful.

The self-importance of Leo and Cancer may be impaired by their differing approaches to life. Leo wants to lead and Cancer is happy to follow. Leo will be happy if Cancer admires him. Compatibility is possible inspite of their different personalities as they enjoy this Leo friendship.

Leo man will be happy to share his time and possessions with his mate. Cancer woman wants loyalty and admiration which Leo man can readily give. Leo man supports her during adversity. This Leo compaibility is based on common feelings, faith and dedication. The star sign compatibility is high between the two.

The Cancer man is sentimental and arrogant. Leo woman craves for love and affection. Partnership may flourish with lot of give and take on both sides. Both have to accept each other’s differences in this Leo love compatibility.

The Leo in love is highly affectionate and expressive. They expect approval from others for their actions and like to show-off. They have contempt for humility. They are reliable and faithful but tend to be rigid in their outlook. Passion and romance dominate their relationships and hence Leo compatibility exists between two Lions.

The Leo can be a selfish person. Both would like to grab attention and command over the other person. The Leo compatibility between two of the same sun sign can be highly disastrous as both want to boss over the other. If there is mutual understanding and confidence, this zodiac match can be highly successful.

There is love compatibility in the initial stages of this Leo relationship. Virgo man is unable to fulfill the difficult demands of a Leo woman. Leo woman can be highly affectionate but Virgo man is not the type to be bothered by romance. Leo woman may get dejected by the complex nature of a Virgo man. A match between the two is not recommended.

Leo and Libra soul mates like social get-togethers, parties, travel and have lot of fun in life. They are romantic and passionate in love. They have different personalities which gives them strength to face difficulties. Horoscope compatibility is great between the two as they balance each other.

Libra woman is indecisive while Leo is a good decision maker. She admires gorgeous and antique stuff. Leo man is ready to finance them. Their match is full of excitement, entertainment, affection and passion. This Leo compatibility with the Libran is of a very high degree.

Leo woman and Libra man openly exchange their thoughts. Leo wants admiration and Libra is dedicated and magnanimous. Libra is highly passionate and satisfies the romantic needs of the sexual Leo woman. The love match is perfect as they have lot of common interests.

Leo is haughty and big headed. Scorpio is domineering and envious. They are attracted towards each other but their furious nature makes them incompatible. Scorpion cannot stand the authority and regal attitude of Leo. The relationship is not durable.

Leo man has a royal life style and is majestic in love. Scorpio woman requires love and warmth. She has no place for his exhibitionism. Both of them are powerful and violent and do not like to bow or concede to the demands of the other person. Scorpio woman is fascinated by the bold and commanding nature of Leo. Leo has no place for the loyalty and dedication of Scorpio woman. Compatibility is low between the two astrology signs.

Scorpio man is highly intemperate and is itching to start a brawl with Leo woman. Leo woman likes to make a show of her love which makes Scorpio man wild. Leo woman is unable to tolerate his difficult nature. This Leo compatibility will surely end in a break up or heartbreaking divorce.

The Leo in love with a Sagittarius have an affectionate and passionate bond. Leo wants to control the relationship and Sagittarius can enjoy his liberty. Both like excitement and the company of new people. Sagittarius tends to flirt which may cause minor hiccups in the match.

Leo dating a Sagittarius woman have good understanding and value their partnership to make it permanent and powerful. Both seek appreciation from public. There is good harmony in the relationship as they have a lot of common traits.

Leo woman and Sagittarius man are attracted to each other physically. Both want to enjoy life fully and have lot of excitement. Sagittarius man has a strong passion and is flirtatious by nature. The partnership will flourish if the Leo woman does not allow him to go after girls.

Except for devotion and dedication towards each other, Leo and Capricorn do not share any common zodiac traits. Leo wants to lead a luxurious life while Capricorn star sign likes to save money. Capricorn likes solitude and is inhibited. Leo is romantic. Compatibility is not good between the two unless they accept each other with their defects.

Capricorn woman does not like the royal and aggressive nature of Leo man. Capricorn wants to be aloof while Leo is attracted by the glare of publicity. If the relationship has to thrive, a positive approach by both without jealousy and inhibition will help. Lot of hard work is necessary to keep the match alive.

Leo woman is liberal in nature while Capricorn man is highly boring. Leo woman has too much energy and enjoys life on day to day basis while Capricorn man likes loneliness and avoids social gatherings. On the positive side, both respect each other. There is hardly anything which inspires compatibility between the two.

Leo attracts Aquarius by passion where as Aquarius charms Leo by his intelligence and self-assurance. Leo has lot of arrogance which may be punctured by the criticism of Aquarius. In spite of the differences in their behavior, this match enjoys reasonable Leo compatibility.

Compatibility between Leo man and Aquarius woman is based on romance and passion. Leo man is selfish while Aquarius woman is interested in the whole world. Leo has to allow Aquarius her freedom and individuality whereas she has to be more intimate with him. With respect towards each other, the match will work. Normally a good match to start with which becomes turbulent with time.

Though Leo woman tries to keep Aquarius man delighted in the partnership, Aquarius man feels weighed down by the responsibility. His cynical nature will irritate Leo very much. The Leo compatibility is not good between the two. With love and kindness, the match can last longer.

Leo likes to lead and Pisces likes to follow. Pisces obeys the judgment of Leo without questioning. Leo is impressed by her calmness and she is attracted by his strength. There is no conflict in the relationship and the high compatibility is no surprise. Leo has to spend some energy to understand Pisces as he is not expressive.

Leo man and Pisces woman have common interest in fine arts. They have entirely different natures. Leo is gregarious and has lot of pride. Pisces enjoys finding fault with others. Physically they may be satisfied but on the whole, compatibility is missing in the match.

Leo woman and Pisces man are bound by passion in their relationship. Leo keeps the match going by her superiority. Problems may arise because of self-centered nature of Pisces man. If that can be avoided, this is a great Leo compatibility love match.