Pisces compatibility predictions can be described to be wild and idealistic.

Pisces is an excellent person and is a visionary. As the reality is different from dreams, he might get badly upset when his vision doesn’t come real. He is gullible, instinctive and compassionate. He is also hazy, cautious and tries to run away from reality.

His imagination is wild about ideal love and romance, but cannot convert it into reality. The Pisces personality is attracted by a person who dreams with him and who is interested in mysterious things, cinema and literary activities. 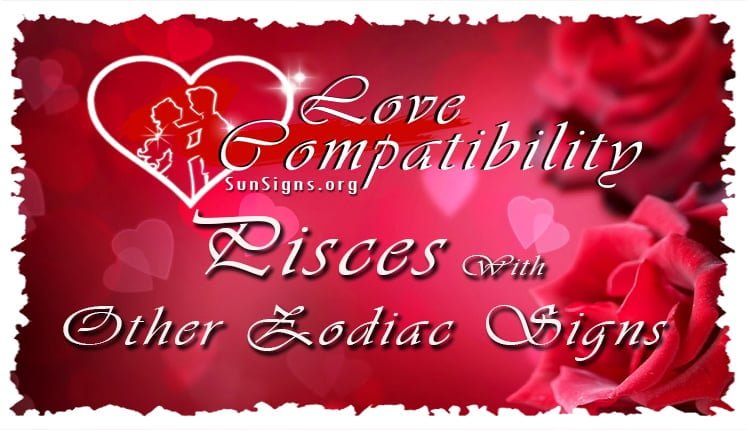 Pisces can inspire Aries at times and depress him on some other occasion. Pisces is timid and obstinate. Aries is dominant and impulsive. If cleverness of the Ram and kind hearted love of Fish can match, this Pisces relationship can be highly compatible.

Pisces man dating Aries woman attracts her by his unusual traits and also motivates her. Aries woman charms him with her gentleness. If Pisces man gives her freedom and the Aries woman tries to be less assertive, this relationship may survive.

The Pisces woman is attractive and perceptive while Aries man is courageous and communicative. Both should avoid conflicts and rein in their tempers. With mutual adjustment and understanding, both can build a very good partnership.

Pisces lives in his own dreamland and his approach to life is fuzzy. Taurus zodiac sign is realistic about life and believes in simplicity. Pisces attracts the Bull by his sympathy, generosity and gentleness. The love relationship between the two is compatible and sustainable for a long duration.

The Taurus man and Pisces sexually are both passionate in love which is the main bond in the match. Pisces woman is sympathetic and affectionate whereas Taurus man is full of guts and strength. There is good harmony in the relationship.

Pisces and Gemini are extremely flexible and are open to new sexual activities. Both can change their plans to suit the other person. Pisces is always dreaming while Gemini sun sign is realistic in his thinking. Pisces is expressive and Gemini is indifferent in his attitude which will end in conflict. If Pisces can become realistic and Gemini tries to be receptive, zodiac compatibility is possible in the relationship.

Pisces female expects her partner to be devoted and affectionate while Gemini has no commitment. Gemini’s requirements in love also change with time. If the Pisces can convince him to be loyal, compatibility may be possible in the match.

As both are water signs, Pisces and Cancer are able to appreciate each other’s principles and thoughts. Pisces is very sensitive and affectionate. Cancer is attracted by these qualities. Pisces is fragile and receptive sometimes, and tough and defiant on some occasions. Cancer binds him with passion and emotion. Astrology compatibility is very good in the match.

Pisces man and Cancer woman soulmates enjoy their companionship fully. Pisces man has great admiration and respect for her. For Cancer woman he is the only man of substance and she helps him to succeed. Even if one of them thinks sensibly and takes the lead, very good compatibility is possible.

Pisces woman attracts Cancer man by her charisma and smartness. She bestows all the affection and happiness on him. In turn, Cancer man feels that Pisces woman can remove the depression from his life as she appears so lively and ideal.

Leo wants to dominate and Pisces will be too happy to follow. There is good Pisces compatibility with the Lion as Pisces concurs with his or her rulings. Leo is attracted by the coolness and kindness of Pisces. Leo has to accept the reticent nature of Pisces. Both hardly get into any confrontation.

Both Pisces and Leo are highly affectionate and ardent lovers. Pisces is self-centred while Leo is charitable by nature. This may result in minor conflicts. But Leo dominates the relationship and nurtures relationships for a long time.

Both share a common interest in finer points of life such as art and music. But Pisces woman and Leo man have many opposing traits. Pisces woman is sarcastic and critical. Leo man is bigheaded. Though they are passionate in love, compatibility in the match is doubtful.

Pisces lives in an imaginary world and avoids making decisions and daily tasks. Virgo star sign has a systematic and well planned approach to life. Both are gentle and their expectations are not great. The Pisces compatibility  with the Virgin is good in the match if they are frank and if they accept each other.

Pisces man lives in his own world of fantasy while Virgo is practical in his outlook. If Virgo can teach her to be realistic about life, compatibility in the partnership may be possible. However the love match between the two is not advisable.

Pisces woman expects verbal appreciation from Virgo man. Virgo man is a practical person and is not expressive about his feelings. She gets frustrated in the company of Virgo man. The Virgo Pisces love compatibility is not good in the match unless there is mutual compromise.

Pisces and Libra are imaginative, romantic and passionate. Pisces is a highly emotional and confused being while Libra is cool and lively. Libra is not happy with the behavior of the Fish and this zodiac compatibility requires lot of effort on both sides.

Pisces man in love with Libra woman are strongly romantic and have common interest in fine arts. Libra woman uses a logical approach to life and Pisces man has an emotional outlook. The match ends in conflict and the Libra Pisces compatibility is pretty bad with the Libran.

Pisces woman and Libra man start their romance on an excellent note. Both are sympathetic and like fine art. Pisces woman by her emotional outpouring spoils the fun of Libra man. Compatibility in the match does not hold as there are glaring differences in their nature.

Pisces is attractive and bighearted while Scorpio is envious, selfish and domineering. Pisces has a good appreciation of Scorpio and will try to keep him cheerful. Scorpio is faithful and committed in love. Scorpio is also dynamic and has good strength of mind. As both are water signs, they have magnificent love compatibility.

Pisces man is timid but enlivens Scorpio woman by her own methods. Scorpio woman will be frank and committed to him. Pisces man’s timidity annoys Scorpio woman who looks for a person with strength of character. Though the relationship is delightful to start with, durability is doubtful.

Pisces woman is bright and sensitive. She does not like the controlling and jealous nature of Scorpio man. Both are interested in studies dealing with mystery of life. Pisces woman and Scorpio man form a delightful and a highly compatible match, with strong physical attraction and perfect understanding.

Pisces and Sagittarius are both jovial personalities and are highly romantic. Both build up lot of contacts based on their sympathy and loving nature. Sagittarius is highly dynamic while Pisces is hesitant. Pisces compatibility  withe the Archer in this match is quite acceptable if both understand each other.

Pisces male is possessive and tries to restrict the freedom of Sagittarius woman. Sagittarius woman is unable to give her the affection when he is direly in need of it. She makes an effort to understand his introvert nature but may hurt his feelings. Lot of persistence is required to maintain the Sagittarius Pisces compatibility in the partnership.

Pisces woman and Sagittarius man have strong physical attraction between them. When dating a Pisces, the Sagittarius is not committed to the relationship which makes the woman distrustful of him. He feels enslaved in the relationship because of her jealousy. Barring some serious conflicts, there is good compatibility in the love match.

Pisces and Capricorn zodiac sign both live in their dreamland. Pisces lives in his or her cocoon and is not affected by the outside domain. They have very dissimilar personalities. Probably this will help them in building a highly compatible relationship with perfect understanding between the two.

Pisces man is a loving person who makes life of Capricorn woman highly enjoyable by providing all the fun in life. Capricorn woman provides depth and safety in the relationship. The Capricorn Pisces in marriage enjoy life time compatibility with lot of romance, loyalty and zeal in the partnership.

Pisces woman will be happy to follow his wishes and never tries to dominate him. She is always there to give him strength in times of difficulty. The strong father figure of Capricorn man will support her delicate personality. The Pisces compatibility with the Goat is very high with long life as it is based on sympathy and affection.

Pisces are emotional and gentle and hence look for a strong mate. Aquarius wants a less sensitive partner. Pisces will take Aquarius to his world of fantasy while Aquarius takes Pisces on his explorations of the real world. The relationship has a very good beginning but will eventually breakup as Aquarius does not like to be tied down.

Pisces man fascinates Aquarius woman with his passionate love. Aquarius woman likes his friendship and takes him along on her adventurous trips. The Pisces personality traits show he seeks her constant company where as Aquarius woman wants her space from time to time. Their match starts on a high note but cannot last long because of their differing perceptions.

Pisces are kind hearted and charitable by nature. Their sympathetic nature draws other people towards them. They never impose their thoughts on others. They never brag about themselves. They are shy people with indefinable personality. It is very difficult to read their minds and one cannot decipher their feelings by their actions.

Pisces man and Pisces woman admire each other and enjoy every moment of their companionship. There is lot of excitement in their life. Both are helpful to others always. They keep on dreaming without putting any effort to convert them to reality. Pisces woman and Pisces man are unable to face the real life as both are lost in their thoughts. However there is natural zodiac compatibility as both have same temperament.