Mars In 12th House Meaning: Confident And A Dreamer

Mars in twelfth house luck shows that everyone deserves to be respected because of the good work they do. Mostly, everyone will get the appreciation they want based on the hard work they give. Equally, where there is togetherness, there is love among everyone.

Mars in the 12th House of the Natal Chart

What happens when Mars is in 12th House? These people like to be on the sidelines and help people achieve their goals.

Being as sensitive as you are, Mars in the 12th house usually feels conflicted, overexpressing emotion. You often put your energy toward helping other people because you have difficulty dealing with your problems. Being useful is what gives you a sense of self-worth, so that’s where you focus.

While Mars tends to be a more aggressive planet, the main thing that drives you is self-doubt. You are not the most confident person because you are more of a dreamer than a doer. Rather than taking care of your responsibilities, you like to help other people tackle theirs. It makes you feel as if you are making a difference without having to risk making a mistake in your own life.

The effect of Mars in the 12th house is more of a passive-aggressive nature. You try to make things happen behind the scenes and not have to deal with the consequences if something goes wrong. This lack of confidence can get you into trouble. Some people can see through it and try to take advantage of you. Because you are so kind-hearted and caring, people tend to walk all over you. 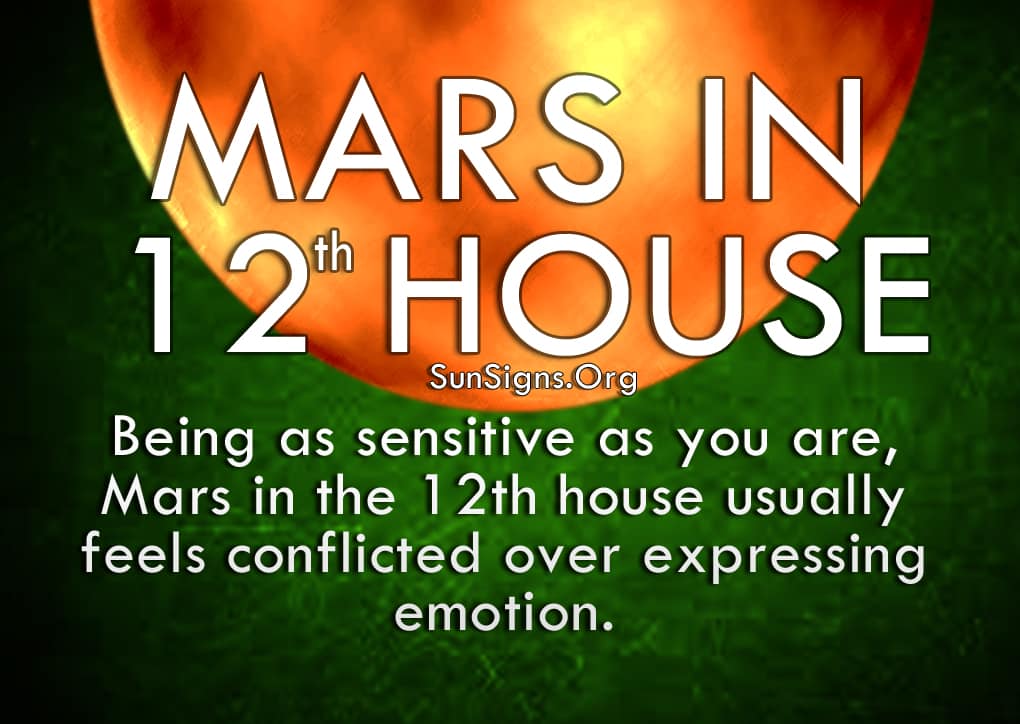 But, the intuition of people born with Mars in the twelfth house in their birth chart is unparalleled. You are very helpful to those seeking advice. You give them a shoulder to cry on and can sympathize with anyone’s situation. You put yourself in their shoes and offer to take on their burden. Because you are so open-minded, you get along with all walks of life and have a large social circle. Equally, an open-minded person will have the make satisfying conclusion on how they can handle their lives.

Actually, Mars in 12th House woman has the advantage of dating someone between the seasons. Basically, they will form a perfect combination, especially when they date Mars in 12th house man. Perhaps, their relationship is set to last longer because they understand one another better. Notable, a relationship that makes everyone satisfied will last longer because they understand what is good for them.

Is Mars in 12th House Good or Bad?

The one thing you can always use to your advantage is your ability to express your ideas. You may have difficulty following through on something. But, you have no problem explaining what needs to be done. You have grand hopes and fantasy dreams – all you need is the help to see them come true. On the other hand, your dreams will give you the push that you want because you will have a clear vision about your tomorrow.

People are inspired by your level of imagination and enthusiasm. Often, they want to join you in this beautiful landscape you’ve built for yourself. Tell them about your goals, and they will help you figure out the best way to achieve them. Actually, you will someday come to a perfect conclusion on how you will handle yourself well. Equally, everything is perfect when you do it the simple way.

Besides, your personality usually has trouble keeping track of their daily errands. Those closest to you are willing to return the favor and help you prioritize and complete your responsibilities. In other words, your career is extremely important to them because they will also get their fair share.

Otherwise, things begin to fall by the wayside, and you start to lose even more control of your life. While you crave peace and tranquility, you can be your own worst enemy when it comes to creating chaos. After all, Pisces is your ruling zodiac sign.

You have to be careful not to get too caught up in your fantasy land, or else you will start to miss what’s happening right in front of you. And people can get frustrated by your lack of maturity and commitment. Normally, everyone deserves to be happy wherever they are because they have done the right thing.

While you are a great cheerleader for others, let them do the same for you. All you need is the confidence to go out there and make your dreams come true. It’s time to stop fantasizing about what you want and start taking the steps necessary to bring it to life. You’ll be glad you did. Equally, when you become a cheerleader, expect to get a better understanding of the things people love.

The Mars in 12th house people should use their vast social network to decide what’s manageable for right now and start working on making it happen. You have the ability and energy to do whatever you want. You have to believe that you can do it. Besides, your belief system is the one that is directing you to the position that you want in life.