How compatible are Leo women and Cancer men mentally, emotionally and sexually? It is not often easy to combine a fire sign such as the Leo woman with a water sign like the Cancer man. They complement each other in some ways, but not so much in other ways. The key to a successful pairing of the two zodiac signs is patience and compromise. Can the Leo woman Cancer man be together?

The things that work well between the Leo woman and Cancer man are the mutual kindness and support they show each other. She respects his careful, measured manner while he admires her successful, independent lifestyle. This shows a sense of stability that they both can appreciate in their partner.

The Cancer man in love is the more emotional one, which annoys her sometimes as she is steadier with her feelings. But the Leo female respects his selfless nature and pure devotion to her, and she offers the same in return.

The Cancer man is very protective of his partner, which makes her feel special and adored. He is also good at feeding her ego, and she satisfies his need for love and emotional security.

This often leads into the bedroom, where the Leo woman sexually automatically takes the lead, and again, he allows it. He is willing to do whatever it takes to please his partner, and she will reward his generosity with immense physical pleasure.

Once the Leo woman in love makes up her mind, she sticks with her decision. This is the one thing they deeply respect their partner, offering them the freedom to explore whatever options necessary to please their lover. And she will ensure they have a fun time researching all avenues. There are always many avenues to enjoy.

It is the Leo women’s enthusiasm and the Cancer men’s dedication that create a stable foundation on which to build the relationship. She helps to bring him out of his shell, and the Cancer male supports her dreams and ambitions. The Leo woman Cancer man complements each other in the fact that they both have their partner’s best interests at heart. 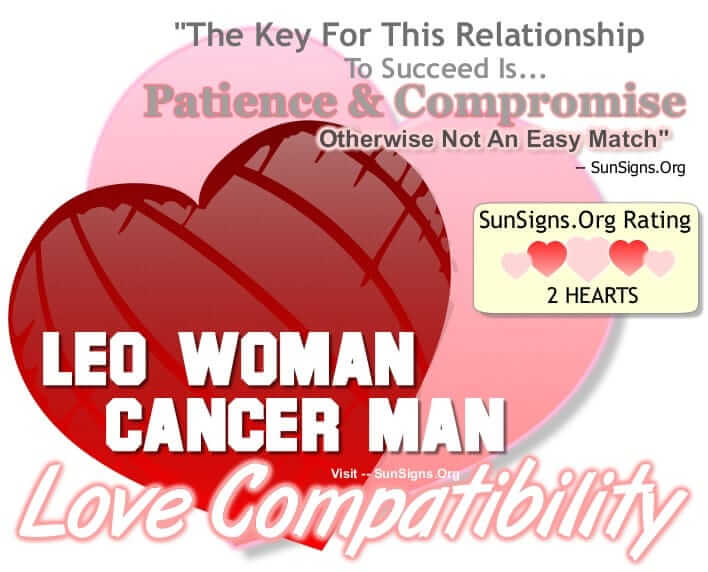 The Leo woman tends to be more dominant, and this can be overbearing for him at first. But he doesn’t mind relinquishing some of the control over their relationship because he trusts her solid opinions.

The Leo woman will have to keep her ego in check, and the Cancer male will have to dial back the emotional outbursts to keep her claws from striking or else their love compatibility will never get better. His response to any fight is to retreat and skulk over the issue, while she will come at him from every angle. Read more about dating a Leo woman or dating a Cancer man.

The sex will be wonderful at first for the Leo woman and Cancer man pair, but after a while, he will be looking for more of an emotional release. This is not something she ever thinks about, and she may not believe it matters if their physical union is gratifying. She may come off as cold to her lover, and the Cancer man sexually, in turn, will feel unsatisfied.

The Cancer male may also be too slow or calculating for her between the sheets, as he likes to take his time, while she rushes in with her immense lust and passion. It will take work to marry the two different sun signs, but he is more than willing to put in the effort in this Leo compatibility.