Upon first glance, the Chinese Rabbit and Dragon compatibility is not the most harmonious of matches, but that doesn’t mean it will not work. Both the Rabbit man and Dragon woman are very independent signs.


In many ways, these animal signs are opposites of each other, yet also similar in some aspects. As with all relationships, compromise is key, especially with this Rabbit Dragon friendship.

Generally, the Rabbit man Dragon woman or Rabbit woman Dragon man union is mysterious in nature. When these two come together for the first time, they see the best in each other. They have confidence that their bond can stand the test of time.

The female energy of the Rabbit female will definitely attract the male energy of the Dragon male. The same can be said about Rabbit man Dragon woman. It’s due to their differences in personality that they will appeal to one another.

The same story of love can be said about Rabbit Dragon married couple. There is something interesting that each partner brings to the table. In most cases, this is what makes marriages work. When these two are not on good terms with each other, they will turn to their strengths to resolve matters at hand. 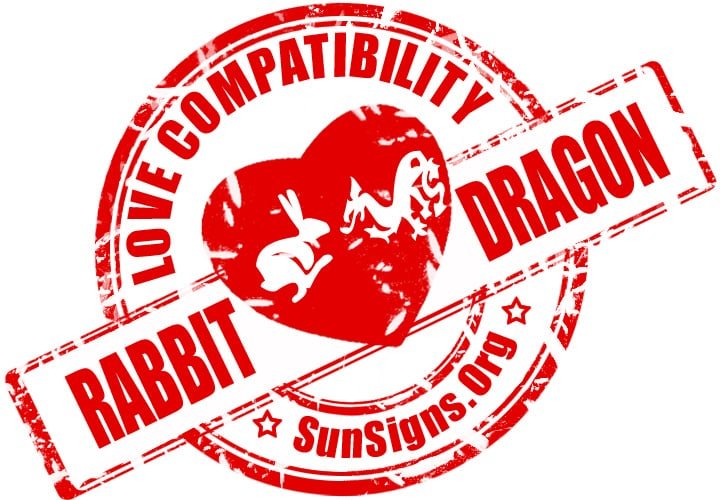 In love, the Rabbit male Dragom female or Rabbit female Dragon male can be rather reserved at first, afraid of committing. They both share the fear of losing their independence to someone undeserving, which can lead them to be somewhat evasive about their feelings, the Rabbit woman more so than the Dragon man.

Either the Rabbit will accompany their lover on their adventure or it will stay at home. Hopefully, the Dragon won’t mind, as this could either complement the relationship or be detrimental to it. Understanding is key, as well as balance when the Rabbit is dating the Dragon. But, with each other they will find an unmatched loyalty, that is when they are ready to commit.

The Dragon prefers to go off on a whim, searching for the next project or adventure. They like to soak up the limelight and can’t sit still. They are filled with candor. You will never have to guess how they feel about something. They are always open and honest and sometimes to a fault.

The Chinese Rabbit opts to carefully think things through, retreating to their home before making any brash decisions. They prefer to be behind the scenes and are the silent types. Similarly, are often elusive in their dealings. They can feel uneasy when people are not secretive.

Although this characteristic can also provide comfort to them, as they will have no doubt in the loyalty of their partner, once he or she has committed. They will also appreciate their lover’s sincerity – if it’s in their favor.

These are also two Chinese astrology signs that appreciate good taste. The male Dragon’s preferences may be more eclectic than the female Rabbit’s, but they can tolerate them. Although they enjoy the finer things in life, neither are ruled too heavily by such material possessions.

Both of them have the tendency to be idealists, as well, each in their own way. The female Dragon thinks big about the world around them, while the male Rabbit tends to create the world in which they live.

While the Rabbit avoids conflict, the Dragon embraces it, almost ardently looking for it or anything that would cause a stir. Unfortunately for the Rabbit Dragon love compatibility, this is something that the Rabbit can’t stand. Its timid demeanor shies away from any turbulence, while its partner thrives on it.

Year of the Rabbit Dragon Compatibility

Another point of possible contention in the Rabbit Dragon marriage is that the Dragon is far more sociable than the Rabbit. They are creatures who are never stuck indoors for too long, preferring the open air and vibrant social life. For them, home is often wherever they lay their head.

The Rabbit isn’t averse to social gatherings, nor traveling, nor adventure, but at the end of the day or the experience, this is one sign that craves its home space. They need a soulmate who is ready to settle down every once and a while. When this doesn’t happen then the Rabbit Dragon breakup is eventual.

Essentially, Rabbit Man will bring their emotions to the table. They are always ready to speak their heart out in matters that affect their relationship. Conversely, the Dragon woman will want to keep her emotions buried inside. She prefers her solitude over a relationship that values the importance of communication.

The emotional nature of the Rabbit woman will be a great pillar in making the Rabbit Dragon marriage compatibility work. Luckily, the heroic nature of the Dragon man will want to protect everything they own, including their never-ending love for each other. 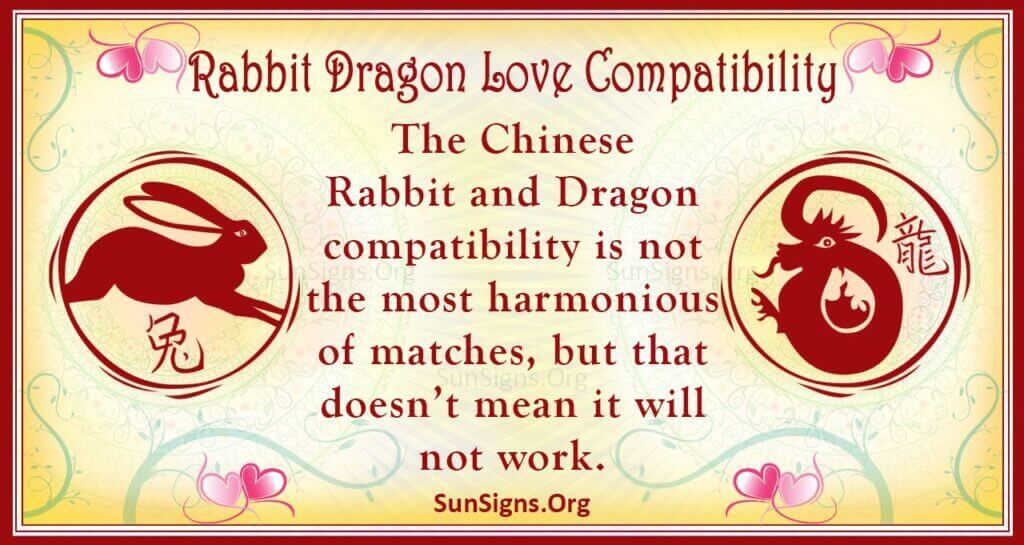 These aspects aside, the Rabbit and Dragon in bed may just be excellently sexually compatible. The Rabbit is one of the most sexual of the signs, up for anything and often.

This can intrigue the Dragon who is always looking for adventure and anything that is not the status quo or mundane. Any problems that arise within the Rabbit and Dragon relationship could easily be worked out here, at least for a while.

Despite the existing personality differences between the Rabbit and Dragon Chinese zodiacs, the two can make a great match. They only need to find a way of compromising, communicating effectively and valuing what they share together. Overall, Rabbit and Dragon should do their best not to try and change each other. Their differences should be the strength that brings them together.