Are Leo woman Libra man compatible mentally, emotionally and sexually? The relationship between a Leo woman and Libra man can be a complicated one. She is set in her ways as a natural leader, while he’s always contemplating the different sides of an issue. This fundamental difference between the lioness and the male scale makes this a tricky relationship. But this zodiac match can be excellent on all fronts.

The main thing that will attract the Leo fire sign and the Libra air zodiac sign is their shared magnetic personalities. The Libra man is flirty and charming, and she is the life of the party, so they instantly get along. The Leo woman is bold and self-confident, commanding the attention of any man around her. And he appreciates the finer things in life, which she recognizes and admires.

The dating Libra male will have no trouble feeding into her ego, for he is supportive in whatever way necessary to maintain harmony in their relationship. And the dating Leo female feels like the only woman in the world to him in that regard.

The Libra man in love shines when it comes to sex, as he is sultry and romantic. He knows how to set the mood and tickle all of her sweet spots to get things going. And she responds with her intense lust and passion, completing the sexual picture he was trying to draw.

There will have to be a fair amount of give and take from both the Leo woman and Libra man sun signs to maintain a solid relationship. He at least is very concerned with keeping balance in their lives, but it shouldn’t be a one-sided concern. She too will have to do her part to reassure her mate that she’s in it for the long haul.

But because the Leo woman in love is so fiercely devoted to him this will work in her favor, as long as he doesn’t get in her way. If the Leo woman Libra man couple can work together, they will take each other far. 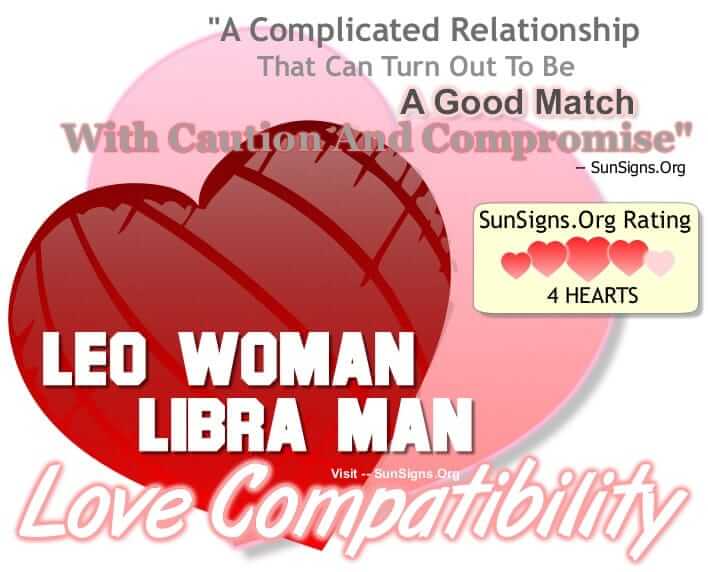 The Leo woman’s arrogance can sometimes throw a wrench in his balanced approach of looking at the world, as she’d rather go forward without waiting too long. He can’t make up his mind that quickly, and that’s where the disparity between the two sun signs begins. But if the Leo woman and Libra man can maintain their initial attraction, they will be able to bring their union into the bedroom as their love compatibility with each other is promising.

The Leo female may be a bit physically overbearing for her Libra partner, as he tends to experience the sexual fantasies inside his head rather than on a primal plain. And he may come off as somewhat detached if he’s not as physically into it as she is. Read about Libra man sexuality.

This will hurt her pride to the point where she gets angry that he’s not completely focused on her. The Leo woman Libra man will have to find a more effective way to communicate their feelings and desires if they are to reach a middle ground in their lovemaking. The Leo woman sexually can entice her lover.

This kind of compromise will have to carry over into the rest of their relationship as well, for the Leo woman is always up for adventure while the Libra male is more cautious in his decisions. She would rather get up and go, and he gets stuck behind pondering the various consequences of this Leo Compatibility.

To make this work, Leo women will have to soften their approach to things, and Libra men will have to take charge of their indecisiveness to make this a successful partnership. Because if he sets off her temper he will be on the receiving end of her claws and he will not react well to this Libra compatibility!