How compatible are Leo women and men mentally, emotionally and sexually? It may seem the Leo woman and Virgo man have very little in common. As a fire sign, she burns brightly, and as an earth sign, he is more muted. She is dynamic and fiery, he studious and calm. But if opposites attract, there is promise in the Leo woman Virgo man union. This is one zodiac match in which opposites attract.

The lioness is the life of the party, and the male virgin notices her as every other man does. Quiet and reserved, the Virgo man is off in the corner observing everything going on around him. The Leo woman may not see him at first until someone else points him out to her.

But the Virgo male in love is known to be very sensitive and intelligent, and he will engage her in thoughtful conversation. This will stimulate her creative mental faculties, and she will see how methodical and precise he is to his knowledge. She also learns he is hard-working and balanced, which is something she admires.


And he isn’t afraid to let the Leo female in love dominate the conversation or the situation, which is something she appreciates. He is secure enough in himself to allow someone else to take the reins, as long as it doesn’t hold him back from achieving his next goal.

But if she wants to take things into the bedroom, the Leo woman sexually may have to wait a bit for he is slower to decide their next move. She will only wait so long, though, as she often pushes full steam ahead when she wants something. But once he makes up his mind, she will find herself with a skillful partner who loves her a lot.


There is no virgin modesty here, as his attention to detail makes him a practiced lover. Although slow and steady, the Virgo man sexually will leave no stone unturned during their lovemaking, making his Leo mate feel like the only woman in the world. She enjoys being placed on a pedestal, and she will return the sexual favor.

The Virgo man’s strong work ethic appeals to her ambitious nature, and the Leo woman Virgo man couple are both determined to live long, healthy lives in the pursuit of whatever life has to offer. 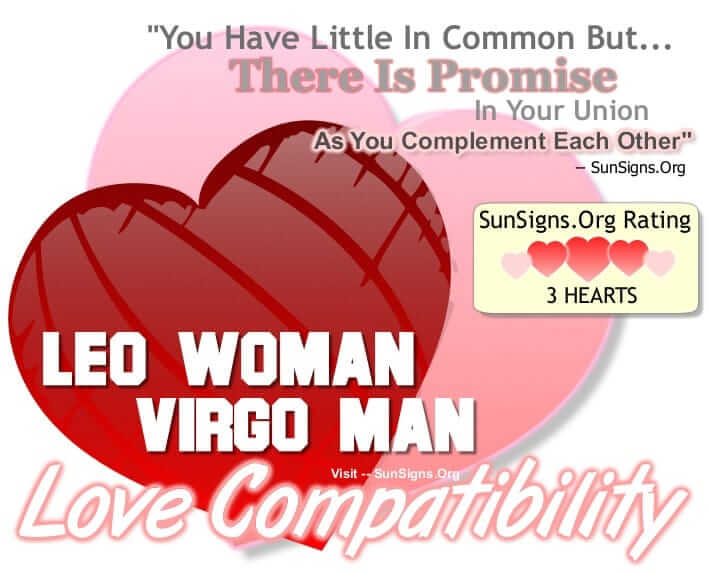 The Leo woman and Virgo man pair who can learn a lot from each other if they are willing. Her ego can roll over his humility at times, leaving him feeling used and then abandoned. At the same time, he’s not great at expressing his feelings, so his detached manner may be infuriating to his partner if you are dating a Virgo man.


The Virgo man has to give her the space to explore wherever she wants, and sometimes go with her to stalk the plains. And she will have to stay home to reassure him that she is committed to the relationship in this Leo compatibility.

The Leo woman’s passion may be a bit overwhelming for him at times, and he will need some reassurance that this is more than just a physical game to her. But once she shows him her total love and devotion, he will respond with his complete fidelity in this Virgo compatibility.

It will take time and patience for these two sun signs to find just the right balance between the sheets. But she is high maintenance, and he is low maintenance, so there may be some hope yet for the Leo woman Virgo man love compatibility!

Leo is a fixed fire sign whereas Virgo is a mutable earth sign, the Leo woman Virgo man compatibility gets a THREE Hearts rating. She has the energy to take his ideas to the next level, when he may not have reached that stage without her. And he acts as a solid soundboard to bounce off her creative notions. Together, the Leo woman and Virgo man can help their partner grow for a lifetime. But they have to learn to keep their differences aside.