What Is I Ching Hexagram 54 All About?

Kuei Mei is the Chinese name of the I Ching Hexagram 54. This has inner and outer trigrams forming thunder over lake. People call this Hexagram ‘the marrying maiden’ or ‘converting the maiden’ or ‘returning maiden.’

Hexagram 54 yijing can be the most difficult to understand. It represents a time when you have ignored a previous hexagram. It calls for a serious time of slow progression to avoid making another serious mistake. There will come a time during the life path where we will make a great mistake. It is impossible to go the whole course of life without error or defeat. 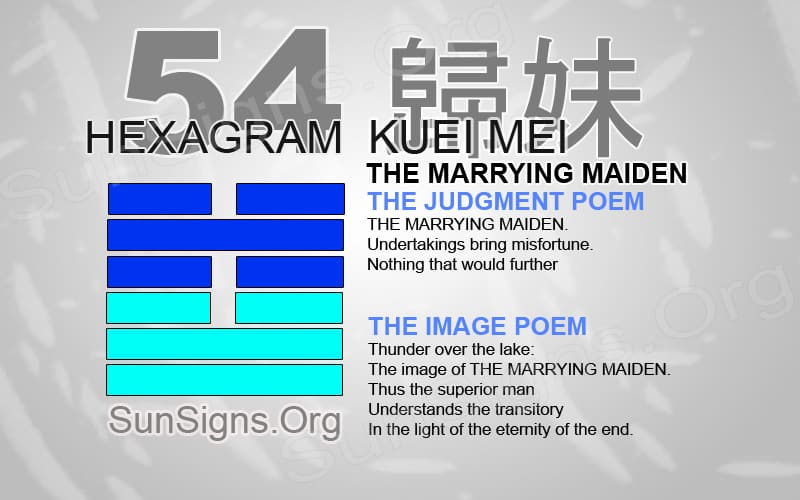 I Ching Hexagram 54 Interpretation and Meaning

Hexagram 54 represents a time of the great error when perhaps you ignored a previous hexagram. There is always a second chance to correct any problems or mistakes that you have made. This period in time can be challenging as we deal with the consequences of our actions.


Also, remember that this phase will also pass. Soon, you will get the opportunity to regain personal strength. When we rush instead of being patient, we can often overlook important signs. They could have been clear signals of danger.

When we ignore these signs and trudge ahead instead, we get into a difficult situation. This may be hard to overcome. Then we realize the wrong we have done. This is then the opportunity to gain a new perspective on how to change the situation.


It is important to safeguard yourself against destructive feelings such as anger or self-pity to overcome the situation. The last thing a person needs during this period is to make another enormous mistake.

I Ching 54 says that it is easy to fall in despair and feel depressed when we have done something to either cause harm to others or ourselves. Hexagram 54 doesn’t give wisdom about the small mistakes. It might be overlooking a small detail or accidentally breaking something of little value.


It means you have made a major mistake that has brought on a tough time. This could be because a person was unable to be patient. Instead, he or she rushed a period of steady flow and now has to deal with the negative repercussions. Running into a situation without being prepared will only lead to a difficult outcome.

Once you can recognize the wrong, you can take steps o overcome the situation and mend any wounds. Sometimes you realize that a romantic relationship is full of lust instead of love.

Being honest with yourself and your partner can help put into perspective a change that needs to come forth or a break in the relationship to progress personally. Ending the relationship all together is sometimes the only option to stop a bad habit.

I Ching 54 says that you might be in a troubling situation in business. But, the only pathway that is going to lead a person out of this dark time is focusing on a slow and steady progression. Learning to be patient is the only way to get out of this situation.

THE MARRYING MAIDEN.
Undertakings bring misfortune.
Nothing that would further.

Thunder over the lake:
The image of THE MARRYING MAIDEN.
Thus the superior man
Understands the transitory
In the light of the eternity of the end.

I Ching hexagram 54 asks you to focus on personal strengths and encourage yourself to keep trying and enduring. Just because you make a mistake doesn’t mean the life path is coming to an end. These times are difficult when those who we have surrounded ourselves with suddenly abandon us based on the actions we have taken.

Look at this time as a new opportunity for change. Also, take a second look at our actions and behaviors. Prepare the body, mind, and soul for the next phase in life that will come eventually.

The most important thing to remember is that some aspect of life needs to change. This is necessary to prevent the same mistake from happening again.