Meditation For The Wheel Of Fortune – Reversed

This tarot meditation on the Wheel of Fortune card reversed, is dedicated to what happens when people give in to hopelessness, living with the illusion that the future is decided.

Lay out your card on its cloth, the candle at its top. Focus a moment, bringing your mind to bear on futility, the end of all hope, and the weight of the future being an unstoppable force.

As you come into the meditation, you will find yourself sitting on a dock. Seated along the dock are people lamenting the future, staring out at the horizon with fear at the oncoming storm.


Behind them are houses with open doors, but no thatch on the roof. But around them lay a healthy supply of dried thatch, ready to be put on in preparation for the storm. 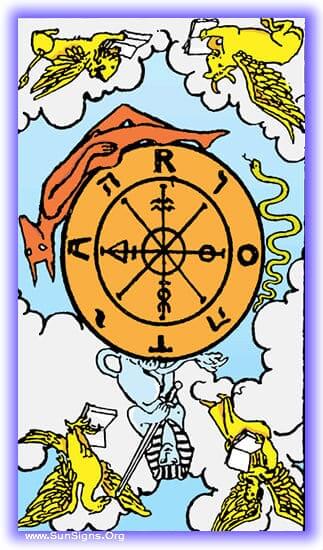 As you walk further on you see a couple crying over their home that is just starting to burn. A well is situated just off to one side, and it would be an act of simplicity to pull a bucket of water and douse the fire.

This habit follows as you travel on, there are those who lament the tides of fate, when the answer is near at hand with a bit of effort.


When you try to speak to them, to point out the obvious solutions sitting near at hand, they cry that there is no point, all is lost, and that they are the victims of the cruel machinations of destiny.

Some decry their fates as being tied to some karmic debt, others claim they have many others working against them and they are all but lost due to their work. You eventually come to a hill overlooking the town.


You see that all is the same throughout. The hopelessness of the illusion of inevitability has taken hold here, and they have all given up.

Pay attention to these details as you look over these lost and woe-begotten, and know that they have not been victims of fate, but their own inability to see the solutions before them.

Is there more you can do with your life right now? The solution to your current problems likely lay before you, you just need eyes to see. Record your notes in your journal, and remember that the only one lost is the one who’s stopped trying.