A person can learn a lot about a culture when they look at the symbolism they put on simple plants and animals. The Chinese culture puts a lot of emphasis on symbolism in animals and plants that a person might see every day. Therefore, learning about these Chinese symbols is a great way to learn about the culture a little bit more.

This article will discuss some Chinese symbols for longevity: bamboo, cicada bugs, the heron bird, and the gourd and peach plants. Like many cultures, the Chinese put a large emphasis on the idea of longevity, living a long and prosperous life. Because of this, the following symbols of longevity are highly important in Chinese culture.

The cicada is a small bug, but it had a large impact on the lives, and deaths, of the ancient Chinese. The cicada has a very long lifespan when compared to other bugs. This is part of the reason why the Chinese used this insect totem for a symbol for longevity. The bug may have had more of an impact on death than it did in life. This bug was not a ruthless killer though.


The Chinese would carve small jade cicadas, if they could afford it, and put it in the mouth of their deceased loved one. This was supposed to ensure that their journey in the next life would be enjoyable. This cicada also symbolizes joy, youth and death.

Bamboo is one of the fastest growing plants on the planet. Even though it grows fast, it doesn’t skip out on important features for itself. Bamboo is an extremely strong and durable plant, but it is also flexible as well. This plant can be used for many different things, ranging from carpet mats to furniture. This plant grows all year long, and stays green for much of it as well. Overall, the bamboo plant symbolic meaning is  held in high regard by the Chinese. Those who believe in Feng Shui say that it is a good idea to plant bamboo in front of your home. Along with longevity, bamboo also symbolizes strength, dependability and adaptability. 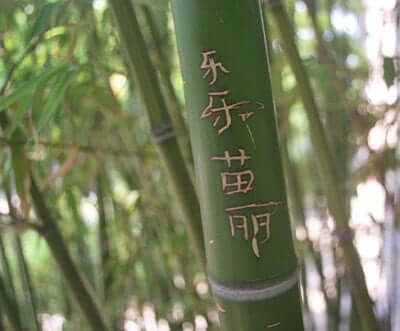 The crane is also an important symbol for longevity in Chinese culture. In one Chinese myth, it said that there were four different types, or colors, of cranes. These were the white, black, yellow and blue cranes. The most important of these cranes to the longevity symbolism was the black crane, which was said to live for over half of a millennium. Obviously the crane cannot live for that long, no matter what color it is, but it still makes a great symbol for longevity nonetheless. The crane also has other symbolism attached to it, such as luck, determination, wisdom, and power.

Lastly, the peach is another Chinese symbol for longevity. It is not just the peach itself that is important in Chinese culture, but the whole peach tree. The wood of the peach tree was said to be able to ward off bad energies and evil. Warriors would often make weapons out of this wood for this reason. The petals that would later bloom into peaches were said to have magic in them, and could induce love, making the peace a symbol for romantic love. The peach itself was sometimes seen as a symbol for immortality. There is even a legend about a magic peach tree that only produces fruit every three-thousand years that will give three-thousand extra years of life to anyone who eats it. All of these things make up the longevity symbolism for the peach.

In case you don’t already know, a gourd is a type of plant that looks much like an over-exaggerated pear. It has the same basic shape, but it is larger, and the food instead of it would be more comparable to a pumpkin rather than a pear.

The type of gourd that is used for the Chinese symbol for longevity is the bottle gourd. The juices in the gourd in mythology are said to be an ingredient to the elixir of life, or the juice of immortality, like a portable fountain of youth. In China and nearby countries, gourds are sometimes painted and decorated to promote good chi and ward off bad energy. The gourd is also a symbol for luck and life.