Justice Meaning In A Tarot Reading

The Justice tarot card represents absolutes, no shades of grey, just right or wrong. It will commonly show up when you have an important decision to make, and any decision you make regarding this will be final.

Changing your path afterward is nigh on impossible, all other directions having been removed once this action is taken. Take a look at the upright and inverted meanings for this Major Arcana card from the Rider Waite deck. 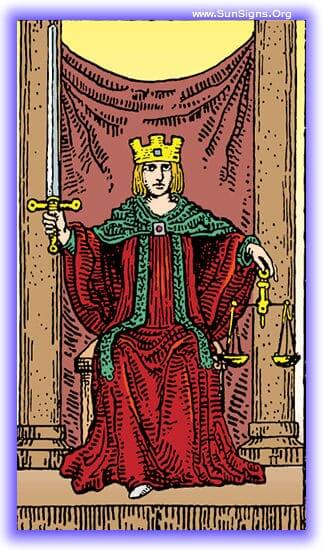 As is implied by its name, this card represents Justice, fairness, honesty, and the law’s enactment. In the straight place, it means that the tides of justice are operating correctly. Make the decision that is the fairest possible given the circumstances.

In the recent past, you have been called on to make a decision. This tarot card showing up here indicates that you made the best decision you could. If you fear that your judgment was biased or selfish, set yourself free of those. You made the best call you could.

You are currently in a position where a decision must be made. You are being called on to make the fairest decision possible, and rest assured your current thoughts on the proper decision are the right ones.

The future holds an important decision that will deeply affect you. Rest assured, the presence of this card shows that the decision will be the fairest possible. This may not be exactly what you hope for, but it will at least be balanced against your situation.

Justice should be blind to make the fairest judgment. This tarot card indicates that at this time, it’s deaf and dumb as well. That is the best possible result. The other potential is deliberate maliciousness and deceit. Whatever the case, this indicates there is a miscarriage of justice in the works. 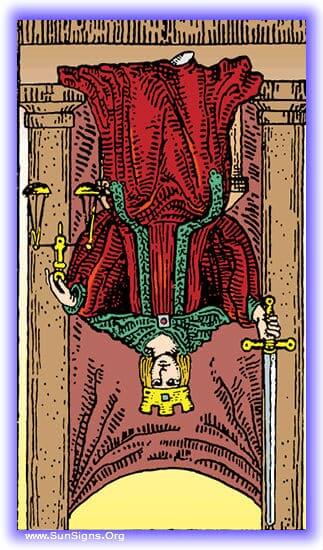 Have you been questioning a decision made recently? Do you wonder if it was, in fact, pure and correct, or if it was made from a position of selfishness or dishonesty?

Wonder no more, that decision was decidedly influenced by forces that were less than altruistic in their nature. Whether you or others made it, know that what was done was done, and at this point, there is nothing to do but live with the result.

The decision you have been called on to make right now is challenging your honorable nature. You may be angry, or bitter, or just not a very nice person. But if you would like to keep your karmic slate clean, reconsider your current decision. It will be irrevocable once made.

Based on your current path, the fate of a decision currently in the works will work against you. Whether it is because of the people involved or the circumstances surrounding the decision, the final verdict will be less than balanced in nature. Prepare yourself and get your ducks in a row. Your current tactic will not work. It’s time for a change.

As you settle into your meditation, you will slowly find yourself in a courtroom. The plaintiff and defendant sit in their sections.

The Judge, gavel in hand, is seated at their podium. Off to one side, you see the jury, seated quietly and waiting to hear the evidence brought forth.

The plaintiff’s lawyer comes forth, describing in detail, in even and non-provocative language, the crimes of which the defendant has been accused. He brings forth, without fanfare, the pieces of information that will best represent his case.

Occasionally, he begins to conjecture, but the Judge upholds every objection the defendant’s lawyer puts forth. He will have no persuasion in his court. He will have no media show. His only concern is that the case presented is complete and correct.

The audience supports his decision with cheers, crying down the lawyer’s attempt to bring dishonesty and conjecture into the courtroom. Only the facts, only the truth, it is the Jury’s job to decide the case.

Once the plaintiff ends his opening statement, the defendant’s lawyer comes forth, presenting his information in the same fashion. The jury sits quietly, listening, nodding at the information without fanfare, frowning deeply at any form of dishonesty or conjecture.

The case proceeds, with the information being presented in the fashion already described. There is no room in this court for anything other than the complete truth.

In the end, the decision is laid out in a fashion that carries Justice. The penalty is neither too high nor meaninglessly low, and both the plaintiff and the defendant find the judge’s ruling fair.

Everyone’s reaction is satisfied. True justice has been served here today, uncorrupted and pure. As you observe the case, keep track of its content, the nature of the charges, and how they may pertain to you.

Write your observations down in your journal, and pay special attention to anything that seems geared towards you. Remember, when making a decision, let honesty and Justice prevail!

This tarot meditation of the Justice card reversed will show the dangers of injustice, deceitfulness, and selfish drives in meeting out decisions. While you set up your meditation area, think about when you have been called on to make a decision, and you dearly wanted to judge in your own interests.

Think about those times when you yourself see the same kind of decision-making. There are dangers in this path, for this is not the path of self-preservation but self-interest, and they serve no one well.

As you settle into the meditation, you will find yourself sitting in a courtroom, the plaintiff and defendant converse closely with their clients. Their expressions are rodent-like, sneaky, and they whisper plans and schemes to miscarry justice in their favor.

As you cast your eye across the chamber, you see the jury discussing amongst themselves, and you see that the plaintiff’s lawyer has made his way over to them. He hands them envelopes brimming with money and speaks to them of the news surrounding the case.

Over his shoulder, you see the doorway open to the Judge’s chambers, where the defendant’s lawyer is handing money to the Judge, who looks like a malevolent and self-satisfied cat in his actions. He is not keen on Justice, only in his own wealth and progress.

When the court starts its session, each lawyer presents their case tinged with showmanship and deception. Each turns the facts to suit their argument, to best suit their client’s victory.

Each attempts multiple times to object to the other’s shenanigans, but the Judge overrules each objection in turn as the case progresses.

The Jury pays no mind to the facts, perking up only when things become dramatic. This is a circus, not a courtroom floor. There is no justice here, only showmanship.

No fairness, only the rule of the dollar and entertainment. In the end, the Judge rules, and the judgment is a harsh one, a fallacious lesson at the expense of the guilty party.

One suffers, and this courtroom serves no justice. As you slowly come out of this Major Arcana Justice tarot card inverted meditation, pay attention to the court’s ruling and the lawyers and the jury’s methods.


Do you see echoes of your own behavior or those of ones who may judge against you? Write these in your journal, and reference them later. Remember that when making a decision, an honest decision benefits everyone.