The Tower Meaning In A Tarot Reading

The Tower is the most traumatic of all the cards that appear in the Rider Waite Tarot. It represents turmoil, rapid-fire change, and tragedy.

Little good comes when this card is in your tarot reading, it is always a portent of sorrow. The fire in the sky above the tower, men and women tumbling to the ground, lightning crashing through the dark sky, and the falling crown of some dethroned king, this Major Arcana card itself depicts nothing but bad omens.

Read on to know more about what this tarot card means in both the upright and inverted positions. 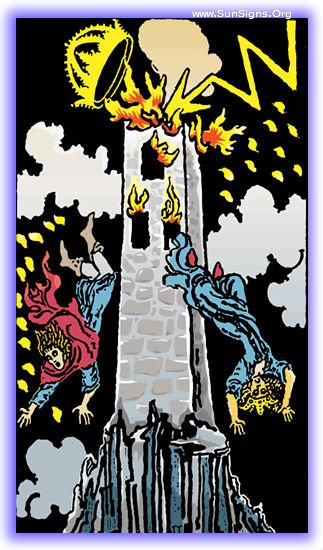 No matter what your preparations are, disaster is coming. Nothing can keep you safe from the torrent coming down the way. The torrent of change coming your way cannot be avoided. All your work has created a false sense of security. The tower is crumbling. Beware.

The only good news here is that it has come your way and passed whatever the tragedy is. You are still suffering from its after-effects, but the worst of it is past you. Now is the time for rebuilding.

Everything around you is in chaos, you can feel the battering howling winds of the hurricane outside, and you know that it won’t be long until the house falls. That you will survive, that it will pass, is the only assurance you can be offered at this point.

There’s a bad moon on the rise, and nothing can be done to stop it. The coming events will irrevocably change your life. “Prepare” may seem like sound advice, but nothing you can do will prepare you for this. At this point, it’s merely a matter of surviving, and survive you will.

Sometimes when you build a fortress, you’re not just locking away those things that might hurt you, but locking yourself away from the life outside. The tower in this position indicates a fear of changes, attempting to avoid an imagined disaster. 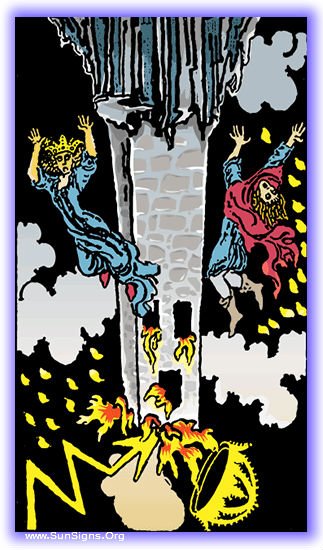 You’ve been hiding in your shell, cowering away from whatever imagined fears are out there. It could be because of past hurt. It could be a simple matter of being overwhelmed. It’s kept you safe, but it hasn’t let you live, and you’re starting to feel that.

Are you safe in your home, little turtle? Something has happened recently that has you hiding in your shell, not poking your head out to see if all those things you fear are really there. It’s time to get out, time to live a little. You may get banged up a bit, but wounds heal, and scars are the hallmark of a life well-lived.

Something is coming soon that has you scared. You want to hide from it, and the appearance of this tarot card in your reading is just a warning against that. Please don’t bury your head, don’t hide from it, meet the coming challenge head-on.

Meditation For The Tower – Upright

This tarot meditation of the Tower card upright will focus on the inevitability of certain tragic factors in our lives. It will walk us down the path that shows that some things are, in fact, inevitable. In certain cases, there is nothing one can do but survive. Place the tower upright, on your red cloth, with the candle at its top.

Settle down into the meditation, allowing the imagery of the card to overtake you. Allow yourself to be filled with a sense of safety, security, the knowledge that whatever is out there, you are prepared for it.

You find yourself standing on the parapet of a sturdy tower, staring out across the horizon. A moat stands in between. The doors are firmly secured from within.

Barrels of food are stacked high against the walls of the kitchen. You have weeks of firewood stored away against inclement weather or attack. All is secure. All is safe.

As you stand on the horizon, you see an army marching towards your tower. No matter, the walls are impenetrable, and you know that you will be safe inside.

They set up around the tower, laying siege to it. At first, all is going well, and they are held off, unable to get through your towers’ defenses.

Then the head of the kitchen comes up. An alarm has been called. The fire has spread to the woodpile, kept too close to the fireplace.

It spread throughout the kitchen, destroying most of the food and water supplies. What’s left won’t last long.

Then the surgeon comes up from the infirmary; a family has come down with the buboes, the marks of the bubonic plague.

The plague is in the tower, and no one is safe. With its veracity, it won’t be long until the entire fortress is infected.

It is as if the gods themselves have turned against you, and the next day the rains come, with rumbling thunder and lightning strikes.

The storm is so violent it begins tearing stones from the walls, crumbling the upper tower, and weakening the mortar in the other.

As all is crumbling, a massive earthquake strikes on the tail of this, and the tower falls. All within is ruined, many are killed, and the army standing outside takes the rest of you, prisoner.

As you watch this sorrowful scene, come out of the meditation on the tower card, recognize that this is one of the points in life when all the preparation in the world wouldn’t have saved them.

Take any messages the meditation may have had for you as you come out and record them in your journal. Know that in the end, even these situations will pass, but sometimes it’s a matter of survival, not dealing.

Meditation For The Tower – Reversed

This tarot meditation of the Tower card reversed will focus on what happens when we hide away when all the world is our enemy, and we keep ourselves so well secluded nothing can get in. Sometimes we go too far. Sometimes we forget that if we build the walls high enough, we haven’t just made sure no one can get in. We made sure we can’t get out.

Set out the grey cloth in front of you, placing the matching candle at its top, and then lay the card down inverted on it. As you focus on it, let the feelings of fear, insecurity, and anger overwhelm you.

Allow yourself to become inundated with a terrible distrust of the people around you and the future.

As you settle into the meditation, you will find yourself inside a well-appointed Victorian home. You’re the only one in the building, and everything within is in order. The windows, however, have bars over them, the doors are locked with multiple locks.

Even in the home, you wear an air filter. You know what kind of nasty diseases there are out there. You had a cat once, but you got rid of it after reading about cat scratch fever. I couldn’t have that around! You might get sick!

All of your food is prepared in the microwave, but you don’t stay in the room with it when it cooks. That radiation could kill you! But at least there aren’t any fires, and it sterilizes the food. Gotta be careful in there.

All of your bills are paid online, but you’re careful not to spend too much time in front of the computer. After all, the rays from the screen could cause skin cancer.

The windows in the back are mostly overgrown, you used to have a gardener, but you’re certain he was robbing you, recording time he hadn’t actually worked.

You’d have checked upon him, but that would require being in front of the windows where not only is there a draft, but you know that someone out there is watching you.

Not watching over you, but actually spying on you, trying to steal your identity. Every glimpse they get of you gets them one step closer.

The life you live in this state is lonely, but it’s safe. You don’t talk to anyone, you don’t let anyone close, and you take all the precautions to be sure that you’ll be safe from disease, theft, life in general. Thank God you’re so careful. It keeps you from harm.

As you come out of the meditation of the Tower tarot card inverted, carry that feeling, that knowledge with you. Think on it carefully by writing it in your journal, anything in there that seems familiar, anywhere you may be able to take more risks and live a larger life under that. Then let the feeling you carried with you through the meditation go. It’s an illusion of safety.