Snail spirit animal signifies that you should no let your pace determine your destination but let time give you the value you want. Basically, when you give time to everything you are doing, then you will get better results. More so, time is a valuable asset that you have because time will give you the pace that will give you timely results. In some cases, people try to take shortcuts because of laziness and greed to want many things in life that are earned easily. Notably, you can be the snail of your life and start your journey now, and someday you will rejoice.

Moreover, the snail totem teaches you the importance of having experience in life. Basically, the experience will earn you confidence because you are sure of what you are doing. Hence this is the perfect time to gain experience in your life by facing every change. Equally, things seem to be going your way because of your mentality.

Snails are slimy little creatures that don’t seem to do all that much. However, that doesn’t mean that the snail isn’t full of animal symbolism. There is more than meets the eye when it comes to the snail. This slow-moving animal has symbolism that comes from the way it moves, some mythology from cultures from around the world. But most of the snail’s symbolism comes from its physiological make-up: what it looks like. This article will discuss all of these traits of the snail and explain how these traits add to the snail’s symbolic meanings.

Unlike hermit crabs and other animals of the like, the snail animal totem grows its own shell instead of moving in and out of different shells as they grow. This on its own is a great symbol of adaptability, and of course, growth. The spiral on the shell has its own special significance, though. The meaning of the spiral changes across cultures and time, but the snail’s spiral’s symbolic meaning is often similar to that of another’s culture.

Probably, the snail meaning is a good omen that you keep seeing snails in your life because it shows how far you are still to become successful. In other words, you should not rush your work but give time, and all will be well. More so, you need to learn to adapt to certain changes as quickly as possible in order to understand the greatness of changing.

For example, in ancient Egypt, the spiral was often used as a character in ancient hieroglyphics. These were an array of symbols that were used as words or characters that were used to tell stories, histories, and other things that writing is used for today. It is one of the oldest methods of written language, and this makes the significance of the snail’s spiral even more important.

The ancient Egyptians thought that the spiral was great at symbolizing several things, including expansion, thought, and evolution. On the other side of the planet, the ancient Aztec Indians also had important meanings for the snail and its spiral. The spiral itself represented the moon and moon phases. The snail spirit totem had a meaning of its own, symbolizing fertility, time, and change. 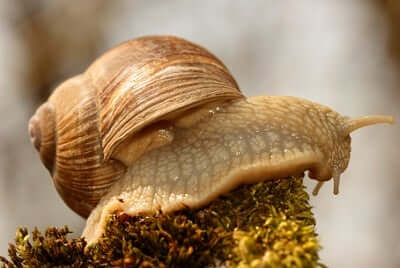 The physical features of the snail animal spirit may be able to provide the most valuable meaning to someone who is trying to get the most out of the snail’s symbolism. Probably, it is a sign encouraging those who are almost losing hope that there are still better things in your life. So, you should keep fighting no matter what until you succeed.

One of the most powerful physical parts of the snail in reality and in symbolism is the snail’s shell. We’ve already talked about how the spiral can influence the symbolism of the shell and how the snail grows its own shell, but there is more to it than just that.

The snail’s shell is basically its only form of protection. Its weak, squishy, and slimy body would be defenseless without the snail’s hard shell. Because of this simple but highly important feature, the snail symbol can represent protection and defense.

Another thing about the snail’s shell is that it doubles as the snail’s home. Because the snail makes its own shell, it carries it with it as long as it lives. This means that the snail is like a living mobile home. No matter where the snail goes, it is always at home. This can symbolize travel, safety, and self-reliance.

The snail spirit animal has come a long way in this world by simply moving along slowly. This can show us that we don’t need to rush around to be safe. We need to work with what we have, just like the snail works with its shell. We can play to our own strengths just like the snail does every day.

Furthermore, the snail spirit motivates you to be strong enough to handle greater changes in your life. Perhaps, it is about time that you will realize that you are getting better each day. Basically, it depends on your hard work and how patient you are.

What does Snail Spirit Signify?

Generally, early correction is the message you get from the snail’s presence. It might be you have missed your path, and you did not realize it. Therefore, when you keep seeing its presence, then you should understand that something is not right and you need to change. Notably, you need to keep praying to get a better opportunity that will change your life for the better.

On the other hand, the snail spirit implies that you will face some changes that might confuse you, and you might end up messing around. Thus, you need to keep learning and teach yourself better things that will earn you a living.

Snail spirit symbolism indicates that there is a  need to focus on your steps now and take every time you have seriously. Actaully, it is a moment of concentration because there is the urge for you to change your life. Equally, you should not waste your time focusing on other things and start focusing on one thing that will change your life.

Spiritual Meaning of a Snail

Snail spirit animal spiritually means that greatness attracts good people in your life. Perhaps, it is a hard thing to find your greatness because the journey is full of mistakes. On the other hand, you should not overreact to the changes you meet in your life. Basically, it is necessary to understand what is the meaning of those changes happening in your life. Notably, how you approach those changes will depend on the importance, they will earn you. You have control of taking personal responsibility and let your ambitions drive you.

Seeing a snail meaning indicates that you have to be smart in making corrections in your life so that you will not meet things around again. Probably, you need to have a reason why you are working hard now.  Perhaps, you need to do something worthwhile that will hard you with great stuff in your life. More so, you should remember that the decisions you are making today will become the story of another day. So you need to make decisions that will motivate you to keep doing better every day. Equally, avoid doing things that you hate doing because you are not fair to yourself.