The Uranus In Aries Meaning

What does it mean to have Uranus in Aries? These people are rebels who are out to change the world.

The Uranus In Aries: Personality

In astrology, Aries is the trailblazer of the zodiac signs. Uranus in Aries likes to be first in everything. No matter what the consequences, they jump headfirst and ask questions later. And they aren’t careful. They may discover useful information along the way. But they can also disrupt the natural order of things.

Uranus symbolizes technology, enlightenment, creativity and forward-thinking. While these are usually positive qualities, they can turn negative if misused. As a fire sign, Uranus in Aries people are impulsive and make decisions on the fly. This is not a problem for a more experienced person who has learned valuable lessons from their past.

They have figured out how to use innovative energy to their advantage. But for someone younger, this can have negative ramifications. They may see it as acting on gut instinct when, in reality, it’s more of a rebellious response. 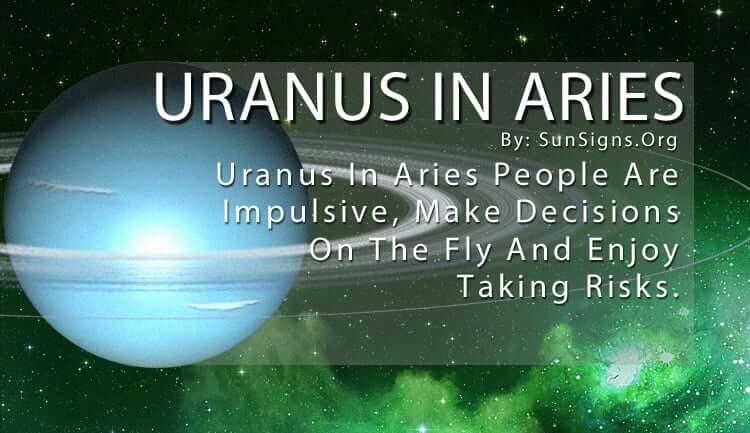 Positive Traits of the Uranus in Aries

Uranus in Aries may feel inspired to try something new. Depending on what that is, it can be helpful or harmful.  They enjoy taking risks, but the rewards are not always given. But if they can productively channel all of their energy, they can make it far in life.

And when Uranus in Aries has developed that skill set, they can come up with wonderfully creative ideas. Their intelligence and innovative techniques can further them when they are focused and excited about new prospects.

Their passion fuels all of their actions. So, they need to have a set direction for energy. This is when working with other people is a good idea for them. But if they have a group of people they trust, they can help them stay on track and complete their newest project. (Find your Aries Uranus Sign meaning here)

Negative Traits of the Uranus in Aries

But what Uranus in Aries must be cautious of is this explosive energy taking over their better judgment. They are great on their feet with a spontaneous event. But it can turn ugly very quickly if things don’t immediately go their way. With their quick temper, the excitement can turn into resentment or disappointment, which eventually leads to rage.

Uranus in Aries has to learn to curb their angry tendencies toward something more productive and satisfying. It is not always easy for the Aries Uranus sign. They are fiercely independent and don’t like having to rely on others to get things done.

Understanding the Effects of Uranus in Aries

You find inspiration in being the best that you can be. You do not want the worst for yourself; therefore, you push yourself to become better and do better. Uranus in Aries meaning reveals that you need to take charge of your life, having that you have the keys to your destiny.

Do not let people dictate how you live your life. Uranus in Aries astrology brings good fortune into your life. With this placement, you can discern what is good for you and what is not. Always push yourself to become bigger and better.

Being creative, you make good use of your talents. Uranus in Aries personality attracts positive energies in their lives by always having a positive attitude that enables you to see the best in everything and everyone.

You value the ability to work hard to make ends meet in your life. Uranus in Aries wealth will increase the more you create networks with people. Networking enables you to combine your ideas with other people’s ideas and come up with great things that will advance you professionally.

Natal Uranus in Aries urges you to find a mentor that will enable you to build your career further. Mentors are great resources that you can make good use of so that you walk on the right professional path until the end.

Uranus in Aries and Love

Uranus on Aries love relationships thrive because of great communication skills. Always open up to your partner about the things happening in your life and allow them to help you where necessary. Being in love teaches you to be responsible for your partner’s feelings and emotions.

Allow the Uranus in Aries people to take the lead, and they will use their genius to carry the enterprise beyond anyone’s imagination. They believe change is possible and will work hard to make sure it happens.

They may have trouble seeing things to the end. But, they take pride in shaking things up and trying to accomplish things that no one else has. This kind of enthusiasm helps Uranus in Aries career and personal lives to make it further.

They have the chance to create wonderful things that can change the world. But this happens as long as they have the right motivation. Spearheading a task isn’t enough. They have to have the follow-through to see things to completion. (Read more about planets in signs here)

Otherwise, their inventive ideas go to waste. Uranus in Aries luck thrives on their ambition. So it’s up to others to constantly fuel it and keep Uranus in Aries in the game. They can ride the discovery of this enormous energy into the sky and never look back.