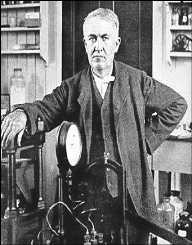 Thomas Edison was born on the 11 February 1847, Milan, Ohio. His father was Samuel Ogden Edison, Jr. (b.1804-d.1896) and his mother was Nancy Matthews Elliot (b.1810-d.1871). Three of Edison’s siblings died in infancy, and as his surviving siblings were much older, he was something of an only child.

Milan, Ohio was starting to become a transport center as the nation entered into a time of industrial growth. Edison’s father was a lighthouse keeper and in 1854, was posted at Fort Gratiot, a military post close to Port Huron, Michigan. Thomas Edison attended school, but not regularly. As a boy, he found it difficult to learn in a classroom environment. His mother, who at one time had worked as a teacher, homeschooled him. He also made up for his difficulties at school by becoming a voracious read. His father has an extensive library, including books from his younger days when he had been a political activist in Canada. Exposed to all of this, Edison started chemical experiments and inventing things at a young age. Once in his youth, he burnt down a barn because he had started a fire, wanting to see how long it took various woods to burn.

The Edison home had a large garden and Edison’s first enterprise was to grow vegetables and sell them. He became obsessed with chemistry, building a lab in the family’s basement. His next enterprise was working as a newspaper boy on the trains between Port Huron and Detroit. He ingeniously decided to transport his vegetables to Detroit on the trains he was working on, using a baggage car which was supposed to be used exclusively for the US Mail. By the time he turned fifteen, he had other mail boys selling his vegetables. He started publishing a newspaper. He called it the Weekly Herald. But something else had caught his eye: telegraphic machines in the railway offices.

Thomas Edison showed his business acumen at fifteen years old. During the Battle of Shiloh in 1862, newspapers in Detroit started listing casualties and war updates. Edison arranged with the Detroit Free Press to obtain copies of the newspapers and sell them on stations along his route. Soon crowds were waiting for the train, to read the latest news and he was turning a handsome profit.

In 1863 at twelve years of age, Thomas Edison started working as an apprentice telegrapher to a man whose three-year-old child’s life he had saved from an oncoming train. After training, he got a job as a telegrapher doing the night shift at Stratford Junction in Ontario. He then worked at various places including Tennessee, Michigan, and Kentucky. His work made him realize that there was room for improvement in the telegraphic business and he started putting his mind to inventions. In 1968, he was working in Boston for the Western Union and inventing devices in his spare time. He invented an automatic vote recorder, but politicians showed little interest in it. Thomas Edison applied for a patent for the vote recorder, his first of many patents.

In January 1869, he was working on a duplex telegraph - a device for transmitting two messages at the same time, using one wire. He had also started work on an invention that could convert signals to letters of the alphabet. He became confident about the inventions he was working on by these inventions and gave up his job as a telegrapher and moved to New York City. Initially, in New York City, he worked for the Laws Gold Indicator Company.

In 1874 Thomas Edison invented a telegraph system that could send out four telegraphs simultaneously. He entered into an agreement with the Western Union. By this time Edison had a reputation as a gifted inventor and his work was being recognized both in the United States and abroad.

In 1875, Thomas Edison decided to concentrate on inventing instead of manufacturing, and he purchased a property in New Jersey. It was a small disused town of around thirty buildings with a railway station.

Thomas Edison named his new laboratory Menlo Park. The family lived in a house next to the station which had originally been the office of the real estate agents selling the land.

The various inventions he made during this period were the carbon microphone (1877-1878) This invention improved Bell’s invention of the telephone. In 1877 Edison also produced the phonograph, the first machine capable of recording sound and playing it back. This invention made him famous and earned him the nickname, the Wizard of Menlo Park. He went to Washington DC and demonstrated the phonograph to the President.

The carbon-powered lamp was invented in 1879. The significance of this is that by using the power of carbon, he invented a lamp that did not require oil or fire. In 1979 he held a New Year’s Eve demonstration at Menlo Park for the general public.

By 1880, Thomas Edison was focused on the general use of electricity. In 1881 he left Menlo Park and started operating in New York City. He set up factories to make the components of the electric light and power system. He also built the first permanent central power station, which opened in 1882. By 1883, electricity was available to the public. In 1887 Thomas Edison left Menlo Park and relocated to West Orange, New Jersey. He continued perfecting his inventions and coming up with new ones. This included a storage battery for electric cars and investigating a natural substitute for rubber.

He had a total of 1,093 registered patents in the United States.

After marrying Mina Miller, Thomas Edison moved to West Orange in New Jersey where he built a new laboratory.

In 2929, Thomas Edison took part in a Golden Jubilee celebration in Michigan. His friend Henry Ford had reconstructed the Menlo Park laboratory. The event celebrated the invention of the incandescent light by re-enacting its invention.

Thomas A Edison died on the 18th October 1931. The president of the United States requested that all lights be dimmed the day of his funeral.