The Uranus In Capricorn: Significance and Meaning

What does it mean to have Uranus in Capricorn?

The Uranus In Capricorn: Personality

Getting ahead in all areas of their life is extremely important to Capricorn star sign. So Uranus in Capricorn is willing to do whatever it takes to achieve their goals. Climbing the corporate ladder comes naturally to them. They have the drive and the intellect to reach the top and succeed.

Uranus represents independence, rebellion, unconventional thinking, sudden changes, and originality. Uranus in Capricorn is all about seeing into the future and planning as much as possible, making them automatic innovators.

Their attention to detail allows them to form a strategy. Their determination helps them to stick with it until completion. While they aren’t excellent with change, they are capable of overcoming any challenge you throw their way. (Know more about Capricorn man or Capricorn woman). 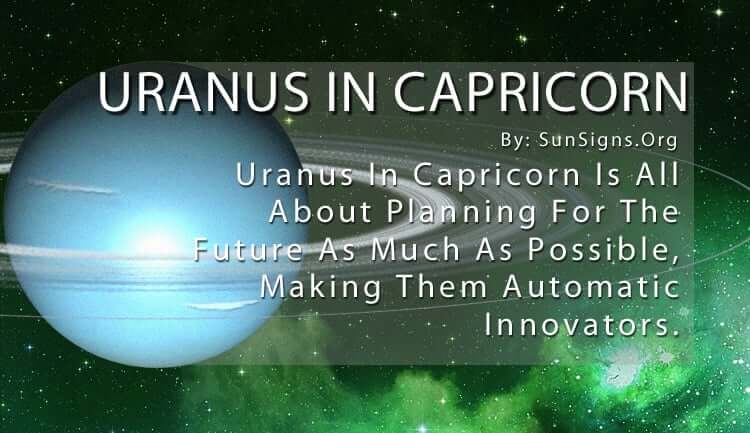 Positive Traits of the Uranus in Capricorn

The Uranus in Capricorn sign in astrology are tough and tenacious and won’t give up without a fight. Status is very important to them. So they will strive to maintain their way of life using any means necessary.


Their stubborn nature, while annoying to some, is what keeps them on the straight and narrow path to victory. They aren’t as flashy as some when they succeed. But, you will certainly know when they have reached the top. As an earth sign, they have symbols of their wealth and power displayed all over the place.


But being down to earth also means Uranus in Capricorn are practical thinkers. That allows them to forge new theories and discover answers with ease. They enjoy working with science and technology. (Read about Uranus symbolism here).

Because of the logical aspect to both subjects, they feel quite comfortable with mathematical problems and solutions. They also have a keen business sense. This helps them to rise in the ranks and gain even greater status in whatever field they choose.

Negative Traits of the Uranus in Capricorn

The only thing that can get in the way of the Capricorn Uranus sign is their inability to go with the flow. They hate not being able to execute their plan in the exact way they planned it. It takes time for them to come up with a new schedule. But they will forge ahead, as sure and as steady as the mountain goat that symbolizes this zodiac sign. (Read about earth symbol meanings).

They can come off as cold or calculative sometimes because of their strong ethics. But those who know them well understand that Uranus in Capricorn knows no other way to work. They have to be fully focused on the subject at hand to overcome any obstacle. Failure is not an option to them.

The Uranus in Capricorn thrives on being useful and successful. They need constant stimulation to keep their active mind from overheating. To help them relax, suggest playing a competitive sport or an activity such as hiking. (Read about Capricorn fitness exercises).

They are at their best during a new or difficult experience, for they love a challenge. It maintains their endless quest to discover bigger things in life and all the ways to make the world a better place.

Because they are so sure of themselves, it’s best to let Uranus in Capricorn lead the way in all areas. When working with them, let them come up with the strategy for a new project.

When in a relationship with them, allow them the opportunity to show off their prestige at a fancy restaurant or a sold-out show. As their friend or family member, let them help you figure out the best way to handle a tough situation.