Uranus In Taurus Meaning: Do Things At Your Pace

The Uranus In Taurus Meaning

What does it mean to have Uranus in Taurus? They have the ability to complete what they start.

The Uranus In Taurus: Personality

Taurus star sign takes their time to do anything. Uranus in Taurus has the energy to get up and get moving. Once they’ve made up their mind, there’s no stopping the things they set in motion. They have a goal and a plan on how to reach it, and they do.

Uranus in astrology symbolizes revolution, rebellion, life-changing innovations and new technology (See Uranus symbolism). Uranus in Taurus makes a concerted effort to carefully research every decision and project to ensure they reach the right conclusion. This ability to build off past information helps them to create new possibilities.

This helps them come up with better ways to accomplish the same tasks. But even with their inventive mind, they still won’t go any faster than they want to. It doesn’t work to try and push them beyond where they choose to be at that moment. (Know the Taurus man and Taurus woman better). 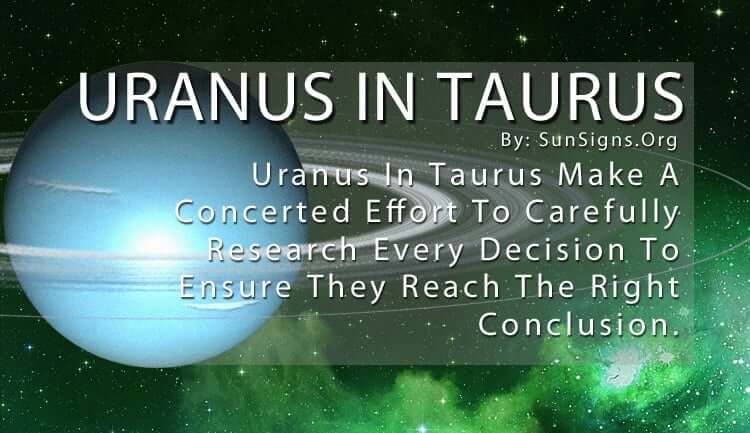 Positive Traits of the Uranus in Taurus

While the Uranus in Taurus sign people are working on anything new, they will move at their own pace. No one can budge them if they refuse to go forward. When they are ready, they will march ahead with great confidence until the job is done. Because they are so resourceful, it’s best to let them take their time. And, you will never be disappointed with the outcome. (Read more about Uranus Signs)

Another thing Uranus in Taurus appreciates is beauty. It’s their well-trained aesthetic eye that helps with their innovations. (planet Venus is the ruler of this star sign). As an earth sign, they are preoccupied with the physical realm and are quite talented at using whatever they have at their disposal.

They are usually good with their hands, and they enjoy constructing things from scratch. Their energy comes from their desire to create something brand new. And, they take pride in adding something beautiful or useful to the world.

Uranus in Taurus enjoys a challenge and works hard to live up to it every time. This is why they excel at almost everything they try. They are often somewhat wealthy because of it. Add to that their logical reasoning, and it’s easy to see how they remain financially solvent. (Get Your financial astrology reading)

Negative Traits of the Uranus in Taurus

Uranus in Taurus works very well in a group. But that’s only if the group has a shared goal and agrees to the same plan. They are a team player when everyone is on the same page. If someone questions their methods, their stubborn personality will come through, and they will not engage with the other person.

But while they are incredibly patient, they do have their limit like everyone else. If pushed too far, you’ll see their bullish temper come out, and no one wants to see that! It’s better to trust the instincts of Uranus in Taurus because they have looked at the problem from every possible angle.

Understanding the Effects of Uranus in Taurus

Your intuition will always guide you on the right path. Uranus in Taurus personality never doubt themselves when it comes to their guts. Follow your heart and do as your instincts tell you always, and you will never go wrong. Do not listen to people who are out to make you look bad before your peers.

Uranus in Taurus astrology brings enlightenment into your life. Work on your spiritual life at all times. It is important to indulge in activities that nourish your spirit. Also, meditate often to get in touch with your higher self.

Is Uranus in Taurus Lucky? With this placement, you learn how to be independent. Independence will enable you to stand on your own and take charge of your life. Allow positive energies to flow into your life by harboring positive thoughts.

To advance in your career, you need to spend your time reading books and articles that relate to your career. Uranus in Taurus wealth will manifest in your life with hard work and determination. In all you do, make yourself better. Do not hold yourself back because you are afraid of taking risks.

Natal Uranus in Taurus shines its light upon you so that you can thrive in all your endeavors. Appreciate yourself and your talents and work towards making a name for yourself. Your career becomes better if you keep working on it.

Uranus in Taurus and Love

While dating, you need to take your time. Do not rush things because then you will end up making mistakes and ignoring red flags. Uranus in Taurus marriage works out fine because of the understanding that exists between you and your spouse.

The Uranus in Taurus woman or man is practical in their approach and meticulous in their calculations. That is why they appear to be moving slower than others. But once they set things in motion, you will be able to see the brilliance of their actions. Good things come to those who wait, and Uranus in Taurus always delivers.

Even when they become excited about an idea, they don’t allow their enthusiasm to get in the way of completing a project as efficiently as possible. This is also why they are good with new technologies. They appreciate anything that helps to do things easier. They are always looking for the next machine or process to do just that.