Like any religion with a ceremonial practice, the Wicca or Pagan religion has some basic tools that are used as part of their rituals. Below we give a basic introduction to some of the tools of Witchcraft, and a little note about what their purposes are. More information on each will be provided, as appropriate, in other articles.

Let’s start with what can typically be found on a Wiccan Altar:

Found as a centerpiece of most altars, the Pentacle is a flat circle of some material, often wood, glass, or stone, on which a Pentacle has been drawn, painted, or etched. This represents the combination of the five elements (Earth, Air, Fire, Water, Spirit), as well as humanity in perfect balance as the combination of the five elements. It, in and of itself, represents the element of earth, though the symbol encompasses all.

Athame is a black handled knife used for ceremonial or ritual cutting. This knife is rarely if ever used to cut anything physical, it’s purpose to specifically focus on cutting the non-material. As such it is often used for casting a circle (though the wand is sometimes used for this purpose), drawing binding runes in the metaphysical boundaries of one homes, or other symbolic uses. It symbolically represents the Element of Air. 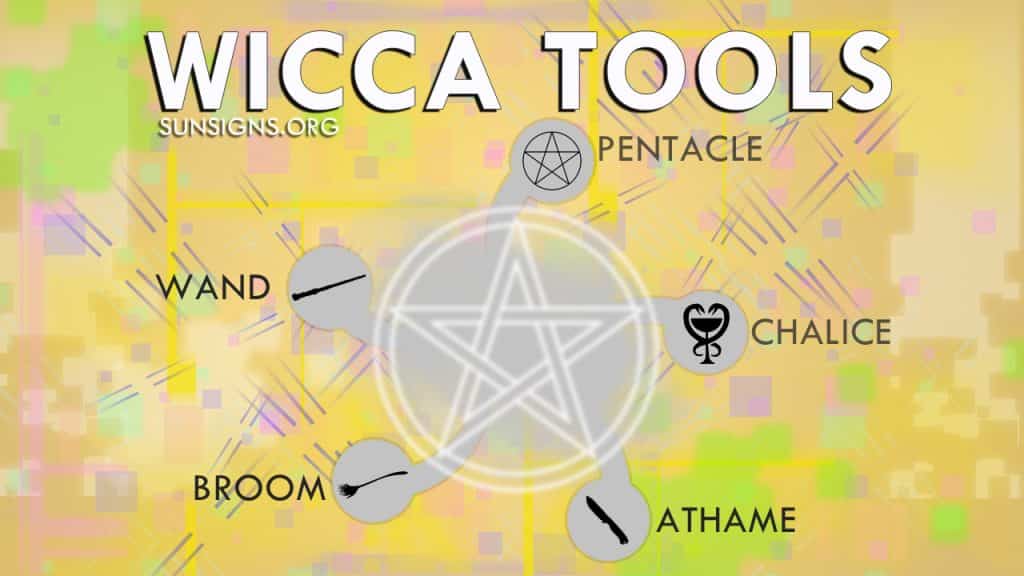 The Boline is the white handled counterpart to the Athame, and is used, as one might suspect, for cutting things in the physical realm. It is sometimes shaped as a small sickle, rather than a straight blade. It is often used for cutting cords, carving runes into objects, chopping magical herbs, or even mixing cooking mixtures.

The wand, though not used in all traditions, represents the element of Fire. It is often made of wood or metal, decorated with crystals, gemstones, and occasionally leather. It is often used for directing energy, much as the Athame, and according to Gardner was used in summoning spirits which the Athame would somehow be inappropriate for. Both the Athame and the Wand can also represent the Masculine principle.

The Chalice represents the element of Water. It is recognized as symbolically representing the mother goddess’s womb. It is often used to hold fluids used in blessing or passing around the participants in a ritual for blessing. It is also used as the feminine element in a symbolic bonding of the masculine and feminine principles where the Athame or wand is dipped, tip first, into the chalice.

This isn’t so much found ON the altar, as being part of the ceremonial tools. A besom is a traditionally made broom, with the handle of hazel wood, and the head made of birch twigs, often bound by willow withys. It’s use is both a literal and symbolic cleansing of the ritual area, removing normal waste, as well as unwanted and residual energies from the ceremonial circle.

While some traditions utilize other tools, these are by far the most common tools, and likely to be experienced in some respect in the home of any witch you happen to come across.

Share
Previous 7 Signs You & Your Lover Have Been Dating For A Really Long Time
Next Is Your Job Killing Your Love Life? How to Have A Great Career & Amazing Romance