The Uranus In Pisces: Significance and Meaning

What does it mean to have Uranus in Pisces?  It means they live in a world that is very different from the real one.


The Uranus In Pisces: Personality

The dreamy qualities of the Pisces zodiac sign often serve them well. This is true for Uranus in Pisces too. Their boundless imagination allows them to see things in a different light. They find unique solutions to complex problems. All they have to do is find the confidence to believe in themselves.

In astrology, Uranus represents originality, new changes in technology, creativity, spiritual enlightenment, and mentally impacting thinking. Uranus in Pisces can seem scatter-brained to some. But, those who know them realize they are simply off in their world. They enjoy fantasy more than reality. This can be a positive coping mechanism or a detrimental reaction to bad news.

Uranus in Pisces tends to view things in a more negative light when it comes to the real world. This is why they often escape to another land that they create. The best part about this imaginary realm is that everyone is welcome – there is no room for discrimination.

With this kind of open mind, Uranus in Pisces frees their thoughts from any inhibitions and allows them to flow wherever they are needed. This helps to keep them more positive about the world at large. Also, it keeps them more engaged in what’s going on around them. (Read about Uranus symbolism) 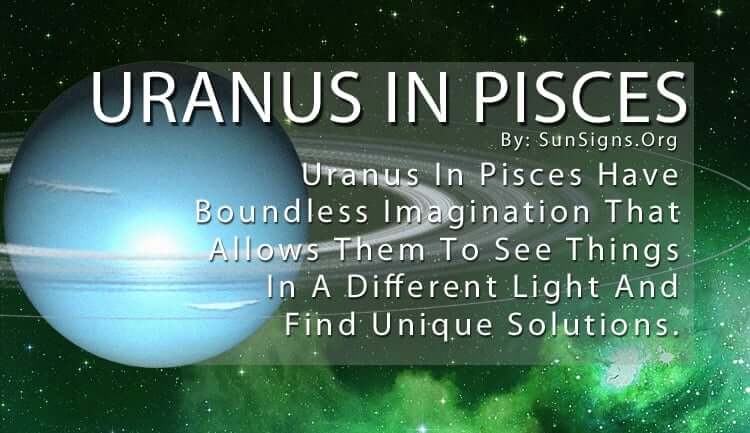 Positive Traits of the Uranus in Pisces

The most important thing to Uranus in Pisces is helping others. This can be mentally, physically or financially. They thrive on finding solutions to people’s social problems. But, sometimes it can be at the expense of their health or well-being.

They have to be careful that others don’t take advantage of their caring nature. And it’s not unusual for them to get trampled (metaphorically – speaking). But this doesn’t stop them from continuing their goodwill tour.


So it’s up to their friends and loved ones to prevent them from constantly getting hurt. The best way to do that is to help them focus on a particular topic or social issue. This will keep them engaged in such a way that they feel useful and productive.

Negative Traits of the Uranus in Pisces

Sometimes the Uranus in Pisces sign people are prone to feeling lazy or listless when they don’t have something to occupy their mind. They are great daydreamers. This can be helpful or harmful depending on the situation.

Sometimes if things get too serious, Uranus in Pisces will try to escape and leave things unresolved. This can be pretty frustrating to those who have to pick up the slack. But be cautious when trying to get them back on track. They are highly sensitive. Coax them gently by explaining how much you need them.

Uranus in Pisces woman or man works best when they are given some freedom to roam but only within a certain set of boundaries. You can’t let them run wild or else they will every time. But offer them structure, and they will try to succeed within the confines of the problem at hand. They want to help, and that desire pushes their creativity and discovery of new things.

Because of this motivation, they have built up their kind of intuition, where they can size up a situation and figure out the best way to handle it. They don’t want to rock the boat. So, they will do whatever is necessary to keep things copacetic.

As long as there isn’t too much pressure on them to succeed, they will do an excellent job for you. Making people happy is their primary goal. This feeds into their happiness as well.