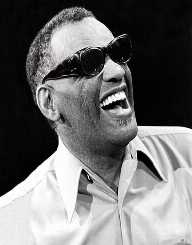 Though Ray Charles was blind, he did not let that stop him from making music.  As a singer, songwriter, and composer, Ray Charles proved himself to be more than just a man who couldn't see.

Ray Charles was born on September 23, 1930, in Albany, Georgia.  His family moved to Florida when Ray Charles was still very young.  His father left the family shortly after that.

When Ray Charles was five, he witnessed the drowning death of his young brother.  Around the age of seven, Charles lost his eyesight to glaucoma.  By then he was already learning how to play the piano with a family friend.

After Ray Charles went blind, his mother sent him to a state school, the Florida School for the Deaf and Blind in St. Augustine.  He attended that school from 1937-1945. Ray Charles continued his music lessons in classical piano, but Ray Charles enjoyed playing other genres from the radio.

Ray Charles left school after his mother died when he was 15 years old.  From that point on, he focused on working in music.

While at the school for the blind, Ray Charles performed for school socials.  Ray Charles also performed on the local radio station.  His teen years were dedicated to playing piano for bands in the Florida area, but that time after the war meant fewer jobs.

Ray Charles wrote music and started wearing his signature sunglasses.  When he moved to Seattle, he met up with Quincy Jones.  Ray Charles and hiso band McSon Tri played at the Rocking Chair. Their recording of “Confession Blues” was recognized nationally and ranked #2 on the Billboard R&B chart.

After other performances in bars and hotels, Ray Charlescontinued composing and writing songs.  Ray Charles even arranged music for notable artists at that time such as Cole Porter and Dizzy Gillespie. Ray Charles toured in Los Angels before returning to Florida in the 1950s.  In 1953, Ray Charles signed a contract with Atlantic Records.  His first hit single as a solo performer was “Mess Around.”

For many years, Ray Charles imitated his music idols like Nat King Cole and Charles Brown.  In fact, his style evolved over the years. Ray Charles found his own style with a combination of gospel and R&B.  His contributions led to the new musical genre of soul. By the end of the 1950s, Ray Charles was producing jazz music.  Ray Charles worked with the Modern Jazz Quartet and made records with them.

After that, his music was climbing the pop charts.  What'd I Say” was #1“ in the R&B chart while it reached #6 on the pop chart.  Modern Sounds in Country and Western Music was his combination of soul and the country music he grew up loving.

In 1960, Ray Charles had an award-winning year.  He won Grammy awards for “Georgia on My Mind” and “Hit the Road, Jack.”  Ray Charles struggled with hits for a few years after that, especially dealing with his addiction problems. However, Ray Charles returned with another Grammy Award for his version of “Living for the City.

Ray Charles went on to produce and release more music, but not to the same level as his early works.  Ray Charles performed at numerous concerts and made appearances in television, movies, and events. Ray Charles died on June 10, 2004, at the age of 73.  Ray Charles suffered from liver disease.

Ray Charles was married to Eileen Williams in 1951, but they separated in 1952.  Ray Charles later married Della Beatrice in 1955.  Together they had three children.

The couple divorced in 1977.  Ray Charles had twelve children with a total of nine women.

Ray Charles once canceled a concert.  He was sued for breach of contract and had to pay a fine.  The reason Ray Charles canceled was that he learned that the audience would be segregated.

Ray Charles also struggled with drug addiction.  Ray Charles started using hero in his teens when he was playing piano in Florida.  It created difficulties in his personal life as well.  Ray Charles was arrested in 1965 for possession of the narcotic.

Ray Charles went to rehab in Los Angeles and stayed off drugs for the rest of his life.

Ray Charles is known as the Godfather of Soul Music for his contributions to R&B.  Fellow musicians and other notable people in the field recognize Charles for his musical genius.  Over the decades of his work, he earned 17 Grammy awards and scores of accolades.

Ray Charles also recorded more than 60 albums in his lifetime.  Actor Jamie Foxx portrayed Charles in the movie about his life.  Foxx earned an Academy Award for his performance in the movie Ray.

Ray Charles was legally blind since the age of seven.  The cause of his blindness was glaucoma.

Ray Charles was an avid chess player.  He played casually with friends like Willie Nelson and professionals such as U.S. Champion Larry Evans.