Uranus In Scorpio Sign Meaning: Creative With Your Talents

The Uranus In Scorpio Meaning

What does Uranus in Scorpio mean? These people are very intuitive as well as adept at being the boss.

The Uranus In Scorpio: Personality

As a water sign, the emotions of Scorpio zodiac sign run deep. This is also true of the brilliance of Uranus in Scorpio, whose creative thoughts and theories are never-ending. Although they keep things close to the vest, they are always ready to solve a problem or add constructive feedback. (Read about your Uranus sign Here)

Uranus is a symbol of new technology, rebellion, revolution, enlightenment, and unconventional thinking. Uranus in Scorpio tends to be a rebel. They are always going against the grain to come up with new and insightful ideas. They pride themselves on finding their unique style of experiments and inventions.

But they keep such things hidden until they feel it’s the right time to reveal their genius to the world because they are leery of how others will react. Even though they come off tough as nails, but inside, they can be quite fragile. 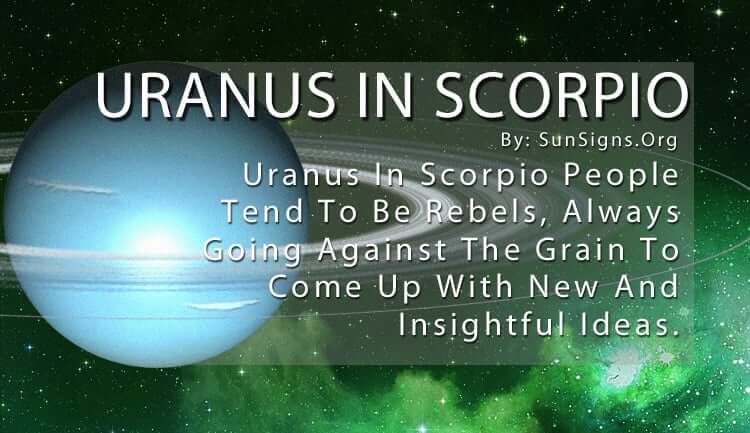 Positive Traits of the Uranus in Scorpio

Uranus in Scorpio proves their worth over and over again without stopping to take a breath. They have to learn to take a step back and let things breathe for a while. Their laser focus can be quite stifling at times.

Uranus in Scorpio may find that their creativity will flow more openly and freely if they let go of their inhibitions. And they should learn to trust others and allow them the freedom to do their own thing. This will take some of the burdens off their shoulders.

Their determination and strong will keep them higher than anyone else. But it may not be obvious at first. Uranus in Scorpio is more of a dark horse that you don’t see coming until the last second. That’s when they pounce.

Negative Traits of the Uranus in Scorpio

They don’t appreciate any harsh criticism and will hold a grudge if they feel slighted in any way. Uranus in Scorpio throws their entire being into everything they do. And they demand recognition for their rigorous efforts. They know no other way to operate except full-on and intense. This can make them difficult to work with sometimes because they despise giving up control of anything.

The best way to handle a Uranus in Scorpio person is to let them take the lead (which they will do anyway). With their excellent psychic powers, they can instantly read a situation and know how to handle it.

They do the same thing with people they can read like a book, even though they reveal very little about themselves. But those close to them know they are fully capable of completing any challenge, the more difficult, the better.

Understanding the Effects of Uranus in Scorpio

Uranus in Scorpio reveals that you have great intuition. Follow your heart and listen to your intuition to ensure that you follow the right path in life. In all, you do ensure that you indulge in activities that will improve your skills and talents.

What is the importance of Uranus in Scorpio? This placement urges you to be true to yourself. Be creative with your talents and skills, and things will work out for the better in your life. Make positive progress in life by being accommodating of other people’s ideas and applying them in your life.

Uranus in Scorpio mother and father work hard to ensure that their children get a better life. In all you do, focus on your loved ones and what you can do to make their lives better. Be innovative and live your life with intention. Follow a path in life that will bring out the best in you.

Uranus in Scorpio personality is hard-working, committed, determined and patient. Your career will face challenges here and there, but you should not give up on the same. Challenges push you to become and do better in life. Uranus influences your life in such a way that you are curious and eager to see what manifests in your life.

A career change is inevitable. Uranus in Scorpio luck brings positive changes in your life that will enable you to reach your highest potential. A career change is good for you because you will switch all your attention to something you love doing.

Uranus in Scorpio and Love

Uranus in Scorpio love predictions call on you to open your heart and mind to receiving love. You are stubborn and always want to be on your own, but you should allow yourself to give and receive love.

Sometimes the Uranus in Scorpio can wear themselves out if they aren’t careful, both mentally and physically. But their massive stamina can keep them going for a ridiculously long time. (Read about Scorpio fitness). They are steady as a rock and willing to put in the hard work to move things forward. This means when they come up with something new, they work tirelessly to see it through to the end.

The main thing Uranus in Scorpio has to watch out for is their obsessive habits. They can become quite possessive of an idea, place, or person in their life. And they refuse to let go until they get their way. This can hinder productivity if the obsession gets in the way of going forward, whether in their career or their relationships.

Uranus in Scorpio is brilliant, but they can sometimes lose themselves in their passion and intensity. If they can loosen up a bit more, they will find more enjoyment in life.