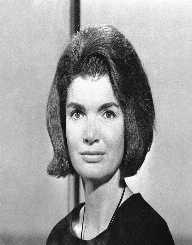 Former First Lady and wife of the late John F. Kennedy was born Jacqueline Lee Bouvier on the 28 July 1929 in Southampton, New York. Her mother was Janet Norton Lee, and her father was John Vernou Bouvier III, a Wall Street stockbroker. Jackie had a younger sister, Lee (b.1933). Jackie’s parents divorced when she was young, and later her mother remarried Hugh D. Auchincloss, a Standard Oil heir.

Jackie’s ancestry was Irish on her mother’s side and English/French on her father’s side. She grew up in New York City and East Hampton. The Bouvier family estate was Lasata, and their mother had homes in Virginia and Rhode Island. The sisters divided their time between their parents.

Jackie went to Chapin School in New York City. Later on, Jackie did her secondary schooling at Holton-Arms School, Bethesda, Maryland (1942-1944). She then enrolled at Miss Porter’s School in Connecticut (1944-1947) and went on to Vassar College, New York. Jackie spent two years at Vassar before studying in Europe. First, she attended the University of Grenoble and then the Sorbonne (1949-1950). Afterwards, she returned to the United States and enrolled at the George Washington University in Washington DC obtaining a BA in French Literature in 1951.

After graduation, Jackie was employed as a photographer with The Washington Times-Herald. Her job involved interviewing members of the public, taking photographs of them and writing small articles about them.

Jackie moved in the same social circles as the Kennedy family, and in 1952, she was introduced to John F Kennedy at a dinner party. They began dating and in June 1953 announced their engagement. The couple was married on Rhode Island on the 12 September 1953 at a mass officiated by the Archbishop of Boston Richard Cushing.
They went on honeymoon to Mexico, and upon their return the lived in McLean, Virginia.

It was in January 1960 as John F Kennedy kicked off his Presidential campaign that Jackie discovered she was pregnant. Because of her history of miscarriages, she was advised not to travel too much, so she stayed at home in Georgetown but remained actively involved, giving interviews, writing a column and talking to the media. With her striking looks and intelligence, people soon started to realize her value as a potential First Lady. John F Kennedy won the presidential race on the 8 November 1960 by beating Richard Nixon. Jackie gave birth to a son shortly after the election.

John F Kennedy was sworn in on the 20 January 1961. Jackie was the youngest First Lady in American history; she was just 31 years of age. Her youth, beauty, sense of style and intellect drew enormous attention. She was an immensely popular First Lady. As First Lady, she was culturally aware and was soon inviting writers, poets, musicians, and artists to the White House. When she traveled abroad, she was equally as accessible. Jackie visited India, Pakistan, France, and Ireland and met the Queen and Prince Philip at Buckingham Palace.

One of her main projects was restoring White House and making it family friendly and stylish. Jackie set up a fund to help with the restoration. She put in a considerable effort, and on the 14 February, 1962 American television views were taken on a tour of the White House with Charles Collingwood of CBS. Besides the interior of the White House, she also had the Rose Garden and the East Garden redesigned. After Jackie had left the White House, the garden was renamed the Jacqueline Kennedy Garden in her honor. Today the White House has a permanent curator, endowment trust, and acquisition fund thanks to her efforts. The television programme on the White House restoration found a worldwide audience.

Jackie became pregnant in 1963 but went into premature labor and lost her baby, a son who was christened Patrick. Disaster struck when in Dallas, Texas on the 22 November 1963 President Kennedy was assassinated. Jackie was with her husband in the motorcade. She remained an imposing figure at his funeral and withdrew from public life to concentrate on bringing up her two young children.

Jackie married wealthy Greek shipping magnate Aristotle Onassis in 1968 and moved to Greece. During this time Jackie was chased by the paparazzi, and it was around this time that she became known as Jackie O. She took to wearing large sunglasses and headscarves to disguise herself. The tabloids reported that Jackie had married Onassis for security and he had married her as an ultimate trophy wife. Some claimed that he still saw his ex-mistress, Maria Callas. Tragedy struck for Onassis when his only son Alexander was killed in a light plane crash in 1973. Onassis himself died two years later in 1975 and Jackie returned to New York City. Onassis’s heir, Christina Onassis paid Jackie the sum of 26 million dollars out of his estate.

After returning from Greece, Jackie returned to New York and began a new career as an editor with Viking Press. She later joined Doubleday as a senior editor and had a successful career.

In 1951 Jackie became engaged to John Husted, but the engagement did not last long.

Her family announced in February 1993 that she was suffering from non-Hodgkin’s lymphoma and Jackie died on the 19 May 1994. She was sixty-four years old. In 1999 Jackie Kennedy appeared on Gallup’s list of the Most Admired Men and Women in 20th Century America.

Jackie was brought up as a Roman Catholic and married into the Catholic Kennedy family. In 2014 a collection of letters between Jackie and a Dublin-based Catholic priest were auctioned, and it was revealed that Jackie had questioned her faith around the time of her husband’s assassination.

Her interest in horses started as a young girl, and Jackie was a talented equestrian. She was also interested in art, literature, architecture, and culture.