Uranus in the First House of the Natal Chart

What happens when Uranus is in 1st House?

1st House Also Known As House Of Self

The first House in astrology is known for your fiery attitude, and Uranus in the first House adds a touch of quirkiness to your nature. You pride yourself on being unique, and you let people know it! You’re not afraid to express your true feelings, and you love to talk about your strange but fun theories.

Uranus symbolizes change, innovation, and a person’s individuality. It encourages us to break out of outdated modes of thinking and create something new. The First House is a trailblazer and Uranus in the first House wants to be at the front of the line in everything.

You can’t and won’t be held back from doing what you want to do. You need the freedom to go where you want and do what you want, or else you feel stifled and unable to present what you want to the world. This is because planet Mars is the ruling sign for the 1st House. 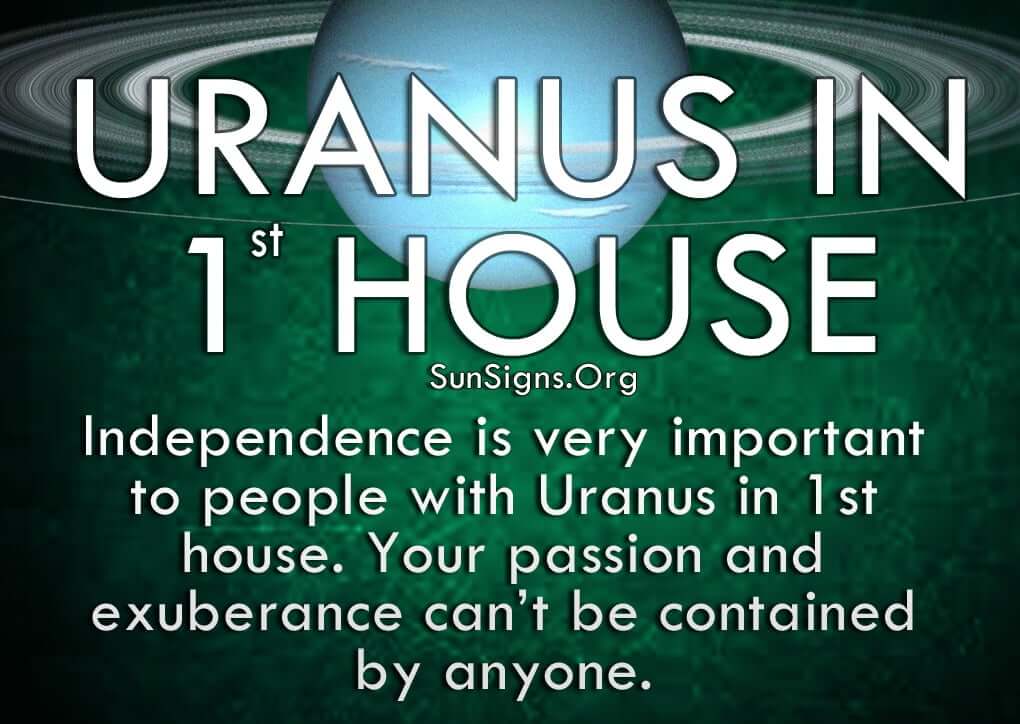 Independence is essential to people with Uranus in the first house personality. In your thoughts and actions, you need to be the boss, and you hate when other people try to dictate your options. Your passion and exuberance can’t be contained by anyone, which might be a bit overwhelming at times.

Those close to you know you have the best of intentions, and they love the time and effort you put into your passions. You are the genuine person, and people appreciate that they always know where they stand with you.

With Uranus in the 1st House in your birth chart, you need to take a step back and try to see things from others’ perspective. While you’re sure you’ve thought everything through, they may have some questions and feedback that shows otherwise. Don’t assume people are wrong because they don’t agree with you. Listen to their arguments and process what they are saying objectively. It’s all a part of learning, and that knowledge keeps you ahead of the game.

Uranus in 1s house predictions shows that you need to learn to tone down your excitement and your brazen manner for moments when subtlety and tact are needed. You’ll find a more delicate approach can go a long way.

The one thing you need to be careful of is losing interest. While Uranus inspires you to change the world, your ideas only have lasting power if you stick with them. You love brainstorming and thinking outside the box to solve problems, but you have trouble following through on the solutions. Get your Uranus sign reading to know more.

After you implement the original idea, you tend to get bored with the mundane details and are ready to move on to the next interesting problem.

This is not a big deal if you are working with people you trust to carry on your project for you. But if others are counting on you to complete the project on your own, you will run into issues of boredom and have trouble staying on task.

Uranus is used in modern astrology, having been discovered in 1781. It rules over the zodiac sign Aquarius. It is the Higher octave of Mercury and a generational planet. Uranus is the planet of the conscious mind. This planet focuses on future progress and improvements.

Uranus in the 1st House Meaning

Uranus in First House is located ten degrees from your Ascendant. This placement makes you different from all the people you interact with. You are special and unique. Uranus in 1st House physical appearance is unique, having that you do not prefer the clothes your peers wear.

Uranus makes you unique in a wonderful sense though some people might disagree with your choice of lifestyle. Uranus in 1st House luck enables your intelligence to rub on people. People appreciate that you make an effort to let them in the know about your life-changing projects.

Uranus in First House marriage improves with time because you are willing to share your space with your spouse. It takes time but eventually, you adapt to the same and give your partner the attention they need.

Uranus in the First House and Focusing on the Future

Uranus is the planet of awakening. Uranus in 1st House natives are way ahead of time compared to other people. You possess lots of futuristic ideas that differentiate you from the people in your age group. All your focus is channeled towards creating a great future for yourself and others.

You have to practice focusing on what’s important, and that’s the result. Don’t look for shortcuts, especially if they are detrimental to the project or event. Work on being as efficient and professional as possible, while maintaining your original vision. With your ingenuity, you will find the right balance of hard work and having fun.

But sometimes your spontaneous nature can catch people off-guard, and they don’t know what to make of your plans or ideas. Give them a chance to warm up to your new thoughts and theories before trying to convince them you are right. You assume you know best, and that’s not always the case.