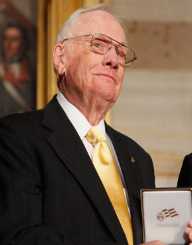 Neil Armstrong was an American astronaut, aerospace engineer and naval aviator. Born on August 5, 1930, he was the first person to step foot on the moon. Armstrong added to his long career as a test pilot and a university professor. Before his astronaut career, served in the U.S Army during the Korean War. He logged over 900 flights during his service as a test pilot for the  National Advisory Committee for Aeronautics (NACA) High-Speed flight Station. He later participated in the U.S Air Force Man in Space Soonest and the X-20 Dyna-Solar human spaceflight program before joining the NASA Astronaut Corps in 1962.

Neil Armstrong's first space flight was in 1966 as the command pilot of Gemini 8. This made him the first NASA civilian astronaut to fly in space. On his second and last space trip, he commanded the Apollo 11 on the first manned Moon landing mission. This time around Neil Armstrong and pilot Buzz Aldrin touched on the lunar surface,spending an hour and a half outside the spacecraft. He was presented with awards like Presidential Medal of Freedom by President Richard Nixon, a Congressional Space Medal of Honor by Jimmy Carter in 1978 and alongside his crewmates received the Congressional Gold Award in 2009.

Neil Armstrong was born in Wapakoneta, Ohio to Stephen Koenig Armstrong and Viola Louisa Enge l.He was the eldest of three children and was a German, Irish and Scottish descendant. As his father worked as an auditor, the family moved frequently from one town to the other. The family eventually settled in Wapakoneta, where Armstrong attended the Blume High School. While there, he took some flying lessons at the Wapakoneta airfield. Armstrong gained interest in flying at an early age when he usually flew with his father and had the first flight on a Ford Trimotor on July 20, 1936.

On his 16th birthday, he received a student flight certificate. Neil Armstrong studied aeronautical engineering at Purdue University in 1947. His education was funded under the Holloway Plan, which required two years study, a two years flight training, a year service in the U.S Navy as an Aviator and another year before acquiring a bachelor degree. Hence, his later calls to the U.S Navy. Neil Armstrong returned to Purdue after the Korean War to continue education and graduated with a Bachelor of Science degree in Aeronautical Engineering in1955. In 1970, he graduated with a Master of Science degree in Aerospace Engineering from the University of Southern California.

As prerequisite under the Holloway Plan, Neil Armstrong had a call into Navy service on January 26,1949, to receive 18 months flight training at the Naval Air Station Pensacola. After the training, Neil Armstrong qualified for carrier landing aboard the USS Cabot and USS Wright and on August 16, 1950, qualified as a Naval Aviator. After his training, Aircraft Service Squadron 7 at NAS San Diego, later he was assigned to Fighter Squadron 51 and then to F9F-2B Panther. F9F-2B Panther was his first flight in a jet on January 5, 1951. After his landing on the USS Essex, Neil Armstrong had a promotion from a Midshipman to an Ensign.

Neil Armstrong set for the Korea war where he first acted as an escort for a phone reconnaissance plane over Songjin. On his second assignment on an armed reconnaissance Panther, his jet was attacked with an anti-aircraft fire while making a low bombing run. His plan to eject on water failed, as the ejection seat was blown back to land. A Jeep was driven by his roommate from flight school then picked him.

During his service in the Navy, Neil Armstrong received  Air Medal for 20 combat missions, a Gold Star for the next 20 and finally the Korean Service Medal and Engagement Star in recognition for his 78 missions over Korea in 121 hours. He had reached a lieutenant rank in the U.S Naval Reserve before leaving the Navy to continue his education. Until October 21, 1960, where he resigned, he remained in the reserve for eight.

Neil Armstrong applied to the National Advisory Commission for (NACA) High-Speed Flight Station at Edward Air Force Base as an experimental test pilot after he graduated from Purdue. Since there was no vacancy there, he was picked by Lewis Flight Propulsion Laboratory in Cleveland in 1955, but later that year he returned to the Edward Air Force Base.

His first assignment at Edward was to pilot chase planes and later flew modified bombers. He served as a project pilot on the F-100 Super Sabre A, C variant, and F-101 Voodoo among others and made his first rocket plane flight on the Bell X-1B on August 15, 1957. At Edwards, Armstrong was involved in several incidents, but in all was able to make headway. He flew over 200 different models of aircraft during his service at Edwards.

In 1960, the U.S Air Force, which was developing a military space plane, X-20 Dyna-Soar, chose Neil Armstrong as one of the pilot consultant group; he was in 1962 picked as one of the seven pilots-engineers to fly the plane when it was completed. He had previously gained selection to the Man in Space Soonest program by the Air Force in 1958. Armstrong also lately applied for NASA astronaut after the deadline of June 1, 1962, had expired. He was, however, lucky for his application to be slipped in by a former colleague Dick Day. He underwent medicals and in joined the NASA Astronaut Corps as the first American civilian astronaut.

The first civilian in the world was, however, Valentina Tereshkova of the Soviet Union aboard Vostok 6 on June 16, 1963. Armstrong was the Command Pilot for Gemini 8 and which was launched on March 16, 1966. His first Gemini mission was unsuccessful because it encountered problems, hence, and cut short. Neil Armstrong was rolled on to the Gemini 11 program as a backup Command Pilot with Pete Conrad and Dick Gordon on board. The mission was launched on September 12, 1966, and this time was very successful.

After serving as a backup command for Gemini 8, he was appointed as the commander for Apollo 11 December 23, 1968. Other crew members for that mission were Michael Collins and Buzz Aldrin. The main mission was to land safely on the moon without necessarily touching on a precise spot. On the mission, Neil Armstrong was set to be the first to touch on the moon due to the positioning of crewmembers. On July 20, 1969, 20:17:40 UTC precisely, they safely landed on the moon and Armstrong made the announcement to the Mission Control and the world saying, "Houston, Tranquillity Base here. The Eagle has landed."

Neil Armstrong eventually made the first step on the moon with his left leg at 2:56 UTC on July 21, 1969, and that was when he made the famous and debated statement "That's one small step for [a] man, one giant leap for mankind." Aldrin joined him after 20 minutes to become the second man to set foot on the moon. They finally set to earth and landed in the Pacific Ocean from where the USS Hornet picked them. They were quarantined for 18 days to ensure they did not pick disease and infections from the moon.

Neil Armstrong was married twice first to Janet Shearon on January 28, 1956. They gave birth to three children Eric and Karen and Mark. Karen, however, died from a brain tumour at age three. The couples divorced in 1994 after 38 years of marriage. Armstrong moved on to marry Carol Held Knight on June 12, 1994. Neil Armstrong died on August 25, 2012, in Cincinnati, Ohio from complications of a bypass surgery. He had undergone a bypass surgery to relieve blocked coronary on August 7, 2017. Even though news spread that the surgery was successful and he was recovering steadily, however, developed some complications, which caused his death.

Armstrong was very critical of the use of his franchise for commercial gains. He banned the use signature, name and other trademarks by companies and individuals for commercial purposes and threatened lawsuits whenever there was a breach of such directives.

Armstrong and his Apollo 11 crewmates were the 1999 recipients of the Langley Gold Medal from the Smithsonian Institution. The lunar crater Armstrong, 31 mi (50 km) from the Apollo 11 landing site, and asteroid 6469 Armstrong are in his honour. Several schools, streets, buildings, places in America and around the world have his namein his honour. He was ranked the most popular space hero by a Space Foundation survey in 2010. The Flying magazine also ranked him first of 51 Heroes of Aviation in 2013.