Uranus In Cancer Meaning: A Positive Attitude in Life

The Uranus In Cancer Meaning

What does it mean to have Uranus in Cancer? These are melodramatic people who can work well in a team.

The Uranus In Cancer: Personality

As a water sign, Cancer is known for being emotional. That’s why Uranus in Cancer reacts stronger to things than others do because their energy is focused on how things make them feel. While they are intuitive and creative, they are also sensitive and need constant reassurance of their ideas.

Uranus symbolizes forward-thinking, original ideas, new technological innovations, and extreme changes. When Uranus in Cancer has a new idea, they run it by others first to see how they receive it. They are a team player who works best in a group.

So their instinct is to check with their friends, family, and colleagues before going forward with something. This sometimes backfires on them if they don’t explain the idea well enough or get the reception they were hoping for. 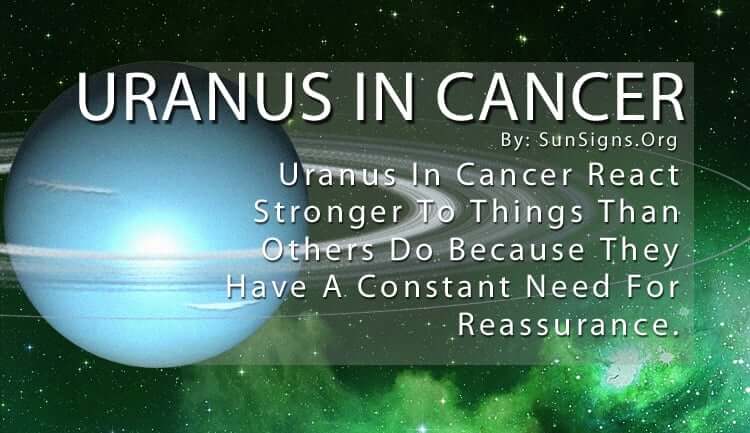 Positive Traits of the Uranus in Cancer

The best way to make Uranus in Cancer feel safe and secure is to reinforce their ideas with positive feedback and constructive criticism. And if they can work from home or schedule meetings there, they are much more comfortable in that kind of environment.

Any place that the Cancer Uranus zodiac sign has put forth a lot of energy to create a cozy setting is the perfect meeting and brainstorming place for them. That’s where their creativity is strongest and where you will get the best results from them.

They aren’t able to think straight if they are nervous or uneasy in any way. But give them the right atmosphere and the right attitude, and they will deliver. Even though they are sensitive, they are also social, and they love working with others. Put them in a productive group, and they will fit right in. (Know how the moon influences your life)

Negative Traits of the Uranus in Cancer

Because they are so sensitive, the slightest negative comment may make them scrap the idea altogether rather than try to improve it. This is often at the detriment of Uranus in Cancer because they are so intuitive they usually have effective ideas. They can feel out a situation or a problem and choose the best way to solve it through gut instinct. But if they don’t fully trust their gut, then they give up. (find out if you are a psychic)

Because of their emotional outbursts, Uranus in Cancer has to avoid annoying others with their impatience or nervous energy. They might be simply trying to express themselves and have their voice heard. But, others see them as a nuisance if they aren’t getting their point across comprehensively. They tend to rush through the conversation because they are afraid of people shooting them down.

Understanding the Effects of Uranus in Cancer

You like doing things your own way. Many people do not understand how you do your own things. You prefer being down low to being all over. Uranus in Cancer personality loves doing things on their own. You value your personal life more than anything, and you are willing to do anything to protect the same.

In astrology, Uranus is associated with authority and publicity, and you are not one for that. Uranus in Cancer meaning reveals that to make it in life, you need to be aggressive and open to change. Focus on the things that will lead to your growth.

What is the importance of Uranus in Cancer? This placement gives you the confidence to face life challenges that might pin you down. Always focus on the things that will bring you joy and happiness. Take charge of your life and make something great of the same.

Uranus in Cancer man and woman need to take their careers seriously. Work hard to make all your dreams come true. Allow yourself to thrive by trying out new things that bring out the best in you and your abilities.

Always seek feedback from your co-workers on how you are doing professionally. Remember, you cannot achieve success on your own. Uranus in Cancer astrology urges you to curate your work. Monitor your progress and appreciate the same.

Uranus in Cancer and Love

Uranus in Cancer marriage thrives because of the cooperation and unity that exists between you and your spouse. Do everything together and work towards creating a great marriage life that many people will admire.

Uranus in Cancer has to find more confidence in their ideas if they are to communicate with others effectively. Sometimes their irrational behavior comes off as quirky or eccentric. This can be a good thing for those who like a creative approach. Find your Uranus sign.

But it can also come off as irritable or erratic, which does not offer a positive vibe. This can lead to feelings of insecurity and doubt, which will cause Uranus in Cancer to withdraw from the situation. No matter how much enthusiasm they have, it can be torn down by one negative comment.

If they are to be successful, they have to learn to communicate effectively and not react so quickly to bad news. If they can take the time to process each piece of information, they may be able to control their feelings.