In Egyptian mythology Seth is known as the god of chaos. He is mostly known for killing his brother Osiris and cutting his body into pieces and spreading them all over Egypt. He was a storm god who was known for thunderstorms and earthquakes. He was also married to his sister Nephthys. 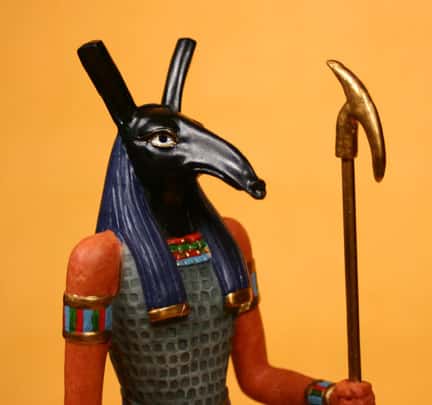 People born under this Egyptian astrology Set sign are always seeking change. They may seek out new adventures and new challenges all of their lives. They may be searching for a feeling of completeness.

They are perfectionists and will not let anything hold them back from accomplishing their goals. They set high goals for themselves and pursue them until they are completed.

The Seth people are natural leaders and do not like failure or being second best. They rise to challenges, always meeting them with determination and persistence. They are not interested in the mistakes of the past. They always have their eyes focused forward and are determined not to make the same mistakes over and over again.

They don’t like being held back by others. They will not sacrifice their own progress for anybody else. They have a hard time slowing down their pace to suit the needs of other people.

The Egyptian God sign Seth connect well with others and are charismatic communicators. Others are drawn to their charming, outgoing personalities. They love having large social circles and will usually be the one in the middle holding everyone’s attention. They are good at making others understand their point of view. They can make good ministers, motivational speakers or salesman.

The Seth people prefer action to quiet and solitude. They like to be in the mix of everything as it makes them feel like they are accomplishing something. They like the feeling of doing something. As they age they might find a path that will be fulfilling and will slow them down.

They are always searching for more information and knowledge. They are usually chosen to be leaders in fields that are not well-known. This serves as the perfect challenge for them.

The Seth Egyptian horoscope sign people have explosive tempers that can burst at any moment. Their moods can be unpredictable. They don’t like any restrictions on their life or their time.

They like the freedom to do as they please and dislike having too many rules to follow. They would not do well working where there is micro-management or strict guidelines.

Their need for change may have a negative effect on their lives. Too much change can make them unsatisfied and filled with unrest and dissatisfaction. They can have a problem staying in one place for too long.

The Egyptian sign Seth are good at starting new projects, but their flighty nature makes it hard for them to wait to see it through. They may never see their projects to completion because they are eager to move on to their next adventure.

They can be a bit of a gossip which could land them in trouble with others. They have a hard time cutting off their talkative nature and can accidentally spill secrets at the most inappropriate times.

The lucky colour for the Egyptian Seth sign is Turquoise & Black.

The sacred animal for this sign is the legendary ‘Seth’ animal.

This Egyptian zodiac sign is compatible with the Geb and The Nile signs.

It is of a pig or hippopotamus or a man with a donkey head.

The polarity for Seth is feminine.