The Uranus In Leo: Significance and Meaning

What does it mean when Uranus is in Leo? They are very helpful and want to be the best in everything they do.


The Uranus In Leo: Personality

Bold and brash describes Leo best. Uranus in Leo takes no time in making decisions and leaping ahead of everyone else. They don’t think about the consequences of their actions. They are some of the biggest risk-takers of the zodiac. Sometimes it works to their advantage; sometimes it doesn’t.

Uranus represents new technology, unconventional behavior, enlightenment, and creative thinking. As a fire sign, Uranus in Leo has a tremendous amount of energy once they come across a new idea. And, they won’t stop until it comes to fruition. They are always scheming and coming up with different ways to do something. They thrive on challenging tasks. (Find your challenge numbers)

This means their creativity has no limits. With their enormous ego neither does their ability to make things happen. They love to one-up people and surpass what anyone thought was possible. Sometimes this is done to prove something to themselves.

But other times, Uranus in Leo is in fierce competition with someone (whether that person knows it or not). That can cause problems if they allow their cutthroat nature to get in the way of the success of a project. They are incredibly ambitious. This can be a good thing or a bad thing depending on how it affects their choices. (Read more about your Uranus sign) 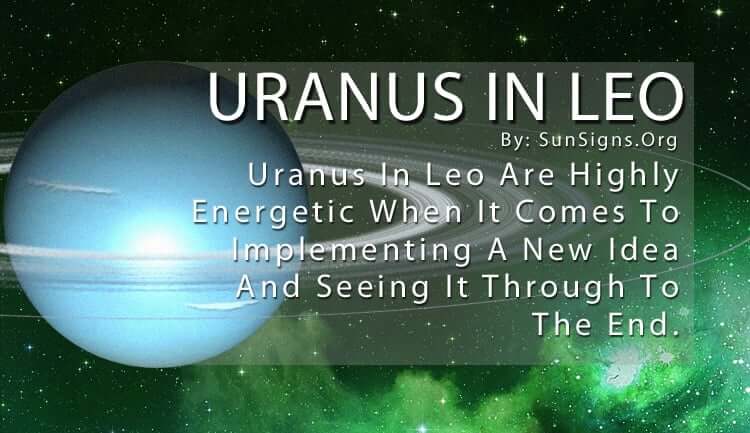 Positive Traits of the Uranus in Leo

The best features of Uranus in Leo are their innovative mind and their incredible motivation. They can make the world a better place as long as they don’t get too ahead of themselves.

As a social being, they love hanging out in large groups of friends. They are very generous with their time and attention. They are passionate about everything they do, and their enthusiasm is infectious.


Negative Traits of the Uranus in Leo

Because they are a natural born leader, Uranus in Leo often takes over whenever they think they can fix or complete a task better or faster than someone else. But at times they aren’t asked to step in, and they do anyway because they feel they are the better candidate to finish the job.

The Leo Uranus zodiac sign also enjoy the spotlight. This is not a great combination if you’re going for humility. It can be challenging to get around their strong will and stubborn nature when they are laser focused on something.

If they are to be successful in all areas of their life (and that is their number one goal), they have to learn to tone down their sometimes ruthless attitude.

The Uranus in Leo can get so caught up in themselves and their problems that they don’t stop to consider how others think or feel. They can also become downright melodramatic about a situation. This makes it that much harder to bring them down from their ego.

If Uranus in Leo can pay more attention to their surroundings and listen to those involved, they will have an easier time making friends and finishing jobs. Take the star sign compatibility.

As long as they try not to step on anyone else’s toes, they can find themselves going far in life. And as they get older, all of their combined experience will help them to let go of their ego and embrace the theories of the younger generation.

Uranus in Leo knows how to build off of good ideas. This is what keeps them at the forefront of technological advances and educational practices. They are moving too quickly to ever fall behind in these areas. And, it helps them stay on top. Find your Power sign.