Uranus In Libra Sign Meaning: Remain True To Yourself

The Uranus In Libra Meaning

What does Uranus in Libra mean?

The Uranus In Libra: Personality

As an air sign, Libra is all about intellect. So, Uranus in Libra always has something on their mind. They constantly come up with new ideas. They look at things in different ways. Also, they listen to all sides of an argument. Thus, they are well-equipped to find the right solution.

Uranus in astrology represents new unconventional technology, revolution, changes, enlightenment, and creativity. With their eye for beauty, Uranus in Libra is often inspired by the world around them. It doesn’t take much for them to see the bigger picture. And they use that skill to enhance their level of intuition.

Combine that with their vivid imagination, and you have someone who is always spouting out inventive ideas and theories. And when they are interested in something, their enthusiasm is infectious. It simply takes this Uranus sign a while to get the ball rolling because they tend to be indecisive. 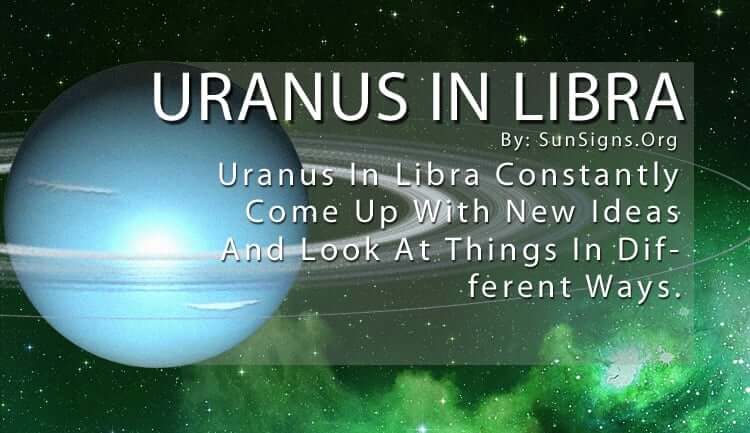 Positive Traits of the Uranus in Libra

They can be slow to act. But, Uranus in Libra zodiac sign has plenty of progressive ideas to bring to the table. They should have the freedom to do their own thing. Then, they are accommodating in solving problems or figuring out the next best step.

And with their wit and charm, they draw others into their world of justice and diplomacy, where everyone is equal. They may come off as eccentric sometimes. But, this means that others can be as offbeat as they want around them.

Traditional thinking doesn’t apply in their realm. They are not as rigid as other people when it comes to creating new projects or finding solutions. Their logical and practical manner helps them tremendously when wading through problems. And it helps to keep them on track while they are brainstorming new theories. Their ability to see into the future takes them far in life. (Read about Uranus meanings here)

Negative Traits of the Uranus in Libra

The Uranus in Libra people can help others with their problems just fine. But when it comes to their own lives, they are too careful when weighing the options. This can lead to problems in their career and social lives. That is why it’s important for them to focus on their strengths. They should always push their ideas forward to keep from standing still for too long.

Another way to encourage Uranus in Libra is to give them some space. They don’t like feeling forced or crowded, whether physically or metaphorically. So be sure to give them plenty of breathing room. This helps to keep them calm, as they can have a short temper. But because they are so obsessed with a balance in their lives, their anger doesn’t last long.

Understanding the Effects of Uranus in Libra

Uranus in Libra personality thrives in bringing people together. You love it when people relate in peace and unity. It makes you happy to see people working in harmony to achieve something great. You have great leadership skills that always put you at the top of your game.

There is no time that you will settle for the bare minimum in life. You always want to become better, and you do all you can to climb the ladder as long as you are not hurting people along the way. Natal Uranus in Libra calls on you to appreciate yourself and your abilities.

Uranus in Libra astrology calls on you to allow major life changes to make their way into your life. To transform and become better, you need to make some important changes in how you live your life.

Soon you will get a new job, and you will find it challenging to adapt, but at the end of the day, you will fall in love with what you do. Uranus in Libra individuals find it hard to interact with people on the first meet. They take time to learn the people in their surroundings before opening up.

What are some of the benefits of Uranus in Libra? With this placement, you are capable of making wise decisions and choices that will guide your career path. Also, the influence of Uranus will enable you to interact freely with your co-workers.

Uranus in Libra and Love

Uranus in Libra man and woman are attracted to people who have the same interests as they do. You find it had to date people who are your complete opposite. When it comes to matters of the heart, you should be careful whom you create room for in your heart.

The need for harmony drives most of their decisions for the Uranus in Libra people. If they discover something that will make the world a better place, then they will make it their number one priority to make it happen. This also comes in handy when they are working as a team.

They are a team player as long as others stay out of their way. They don’t have to lead the group. But, when given a task, they like to be left alone to finish it in their way. But they also allow others to work. However, their feel is best, which makes Uranus in Libra easy to be around. They have an open mind and are very accepting of other people’s views and beliefs. Being social butterflies, they often have a large circle of friends and loved ones.

Share
Previous Uranus In Scorpio Sign Meaning: Creative With Your Talents
Next Uranus In Virgo Meaning: Being Responsible