The Uranus In Aquarius: Significance and Meaning

What does it mean to have Uranus in Aquarius? These people think out-of-the-box and are unique.


The Uranus In Aquarius: Personality

Reading the mind of an Aquarius is impossible. Uranus in Aquarius one of the unique individuals in the zodiac. They thrive on unconventional ways of thinking and coming up with solutions to complex problems. While some don’t understand their thought process, they always reach their end goal.

In astrology, planet Uranus symbolizes rebellious thinking, new technological innovations, creative ideas, spiritual enlightenment, and originality. Uranus in Aquarius has all of this in spades.

They excel with new ideas and machines. They always find clever uses for them that no one else has thought of before. Their unique vision of the world and life, in general, is the driving force behind everything they do. (Know more about the Aquarius man and Aquarius woman personality.) 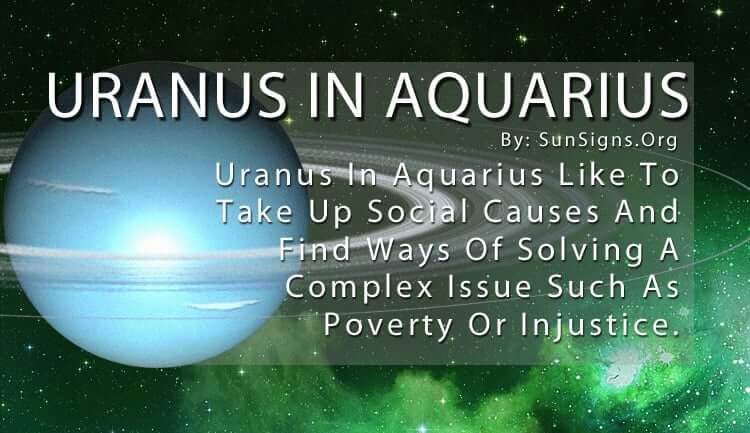 Positive Traits of the Uranus in Aquarius

While some are confused by their methods, Uranus in Aquarius knows exactly where they are going and what they are doing. The gears of their mind are constantly spinning and grinding out new problems and solutions.

But these may be too many for society to keep up with sometimes. That’s often why they gravitate towards fields of study like math or science. These always offer new questions to answer. (find out how planets in signs can influence your personality).

Once the Aquarius Uranus sign has their next project to tackle, they obsess over the research process and pore over all of the information necessary to form a complete picture. The theories they study often have to do with the greater mysteries of life. They like helping to further the evolution of humanity.

They like to take up social causes and get others interested too. They aim to find ways of solving a complex issue such as poverty or injustice. And their unique vision of the way reality works helps them to look at things differently than others. They always find a way around tough situations.

Negative Traits of the Uranus in Aquarius

Sometimes Uranus in Aquarius come off as scatter-brained. And it’s true. They can be forgetful of minor details. They don’t have the time to absorb every little thing when there are so many more important things to be done.


The only thing Uranus in Aquarius has to be careful of is their ego. Because they are highly intelligent, they tend to talk down to others when explaining things. They do this not because they feel superior to them but because they are always looking to debate their thoughts.


And when they get caught up in something they are unable to multitask. This means they might ignore someone if they don’t realize they are speaking to them. This can make Uranus in Aquarius seem detached or aloof. But in reality, they are completely focused on something else they feel is extremely important.

Their enthusiasm, once they have found a cause worthy of their time and effort, is unmatched. They stop at nothing to advance people’s knowledge of the issue and their desire to do something about it.

Uranus in Aquarius, being a social being, needs others to bounce their ideas off of and to strategize the best solution to the problem. Their ability to look five steps ahead into the future is immensely useful in this regard. And, they are ready for anything because of their ability to go with the flow.

The best way to get through to them is to either join their cause or give them the freedom to see it through to the end. They will appreciate your understanding, even if they don’t fully comprehend what you’re doing for them. As long as they can go after what they want, they will be happy and satisfied.