This tarot meditation of the Justice card reversed will show the dangers of injustice, deceitfulness, and selfish drives in meting out decisions. While you set up your meditation area, think on those times when you have been called on to make a decision, and you dearly wanted to judge in your own interests.


Think on those times when you yourself have been subjected to the same kind of decision-making. There are dangers in this path, for this is not the path of self-preservation, but of self-interest, and they serve no one well.

As you settle in to the meditation, you will find yourself sitting in a courtroom, the plaintiff and defendant converse closely with their clients. Their expressions are rodent like, sneaky, and they whisper plans and schemes to miscarry justice in their favor.


As you cast your eye across the chamber, you see the jury discussing amongst themselves, and you see that the plaintiff’s lawyer has made his way over to them. He hands them envelopes brimming with money, and speaks to them of the news surrounding the case.

Over his shoulder you see the doorway open to the Judge’s chambers, where the defendant’s lawyer is handing money to the Judge, who looks like a malevolent and self-satisfied cat in his actions. He is not interested in Justice, only in his own wealth and progress. 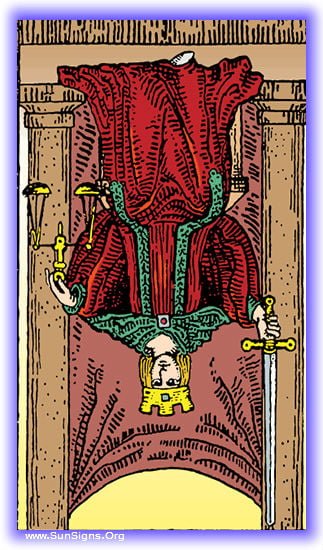 When court is called into session, each of the lawyers presents their case tinged with showmanship and deception. Each turns the facts to suit their argument, to best suit their client’s victory.

Each attempts multiple times to object to the other’s shenanigans, but the Judge overrules each objection in turn as the case progresses.

The Jury pays no mind to the facts, perking up only when things become dramatic. This is the courtroom floor turned into a circus. There is no justice here, only showmanship.

No fairness, only the rule of the dollar and entertainment. In the end the Judge rules, and the judgment passed is a harsh one, a fallacious object lesson being made at the expense of the guilty party.


One suffers, and no Justice is served in this courtroom. As you slowly come out of the this Major Arcana Justice tarot card inverted meditation, pay attention to the ruling of the court, and the methods employed by the lawyers and the Jury.


Do you see echoes of your own behavior, or those of ones who may judge against you? Write these in your journal, and reference them later. Remember that when making a decision, an honest decision benefits everyone.