How to Date a Libra Man

Dating a Libra man can be a fun thing to do. Firstly, a Libra Man is usually a friendly person and loves to be with her partner all the time. In other words, you should be in a position to offer the love your partner needs because he believes in closeness. Also, he is happy when you both make a joint decision where everyone feels okay. That can be a good idea because everyone will be in a position to decide what they want. Equally, Libra men are the king of romance.

Basically, if you want to have fun and take adventures, then you should date one. Actually, you will be going to places where you have never been to. All your entire life will be movement. Sometimes it is better to choose happiness over other things, and you will live longer. Why be in a relationship that you are not comfortable or happy with?

If you are looking for a man that is even-tempered and balanced in his approach to life, the Libra man is the perfect date for you. He thrives on maintaining harmony in a relationship and is concerned with the well-being of everyone around him. Social and charming, he’s a great guy. Find out what dating a Libra man can mean. Make the most of the free dating tips.

It’s easy to start a conversation when dating a Libra man because he is friendly with everyone. And if you don’t get around to it, he will because he wants to talk with all the people in the room. Cheerful and funny, he puts anyone at ease with light conversation and witty banter. 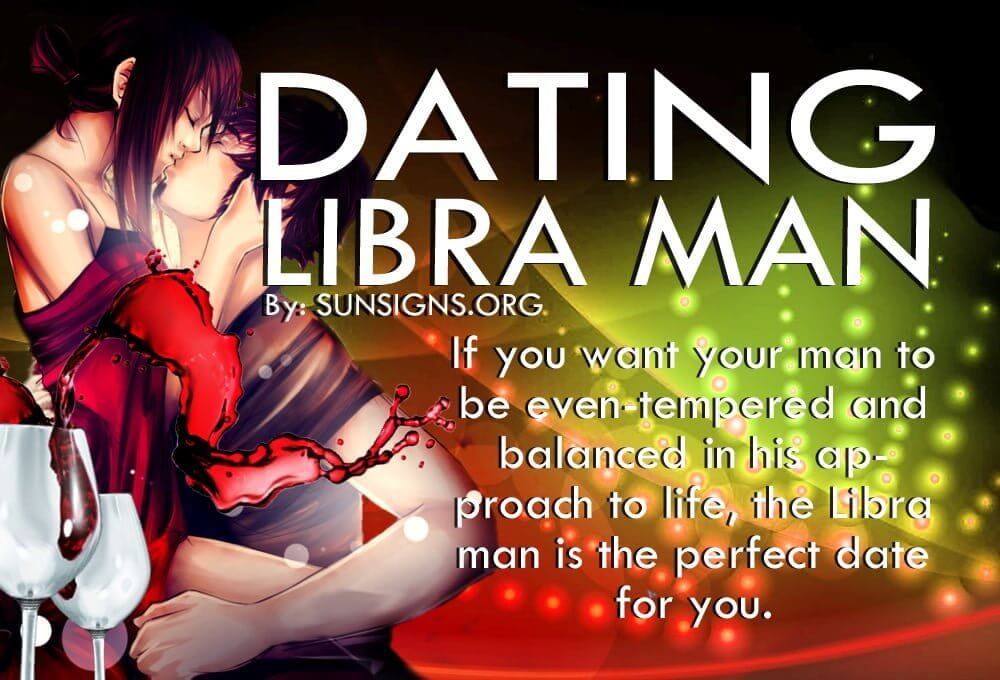 What is Libra Man Attracted to?

The Libra male is very bright, so he appeals to his intellectual side when joining the discussion. He loves debates, for he always looks at both sides of an issue, so he offers up a social or world problem to discuss. Once he gets going, he’ll be putty in your hands.

But be prepared to come up with the first date idea because the Libra zodiac sign tends to be indecisive. This shouldn’t be too difficult though, because he is very easy-going and will accept wherever you want to go. Just try not to do anything too extreme, for he doesn’t appreciate anything over the top. Keep it low-key, not boring, and he’ll want to continue dating.

And this is the part he really likes because he enjoys being in a relationship. The Libra male is a master with affectionate gestures, romantic outings, and the entire courtship process. He’ll work hard to know everything about you and then use that knowledge to keep you happy throughout your relationship.

But be aware that he is a social butterfly, and he treats everyone he knows as if they are the most important person to him. You’ll have to share his attention with many others, although he does not mean to ignore you in any way.

Libra men try to keep everyone as happy as they can. Suppose you can get along with his friends and family that is a big plus in his book. But don’t expect him to show his appreciation with feeling, for he is a more practical person than an emotional one.

This is true in the case of sexual astrology, too, for the Libra man experiences your lovemaking on a mental level. He’s not looking for a spiritual bond so much as for a thoughtful connection with his partner. Bring some mind games between the sheets or fantasy scenarios, and he’ll be interested from the start.

The Libra people are more aware of his surroundings and your enjoyment than he is of the sexual union between the two of you. That may make him seem somewhat detached from the whole thing.

But that man is simply focusing on different things and focused to keep a constant flow of pleasure and satisfaction. If you want more than that, though, simply come up because he will change directions to try and accommodate your request.

According to Libra Man, having a woman of the same thoughts is a special thing. Mostly, he wants you to think and do the same things. In other words, he believes that you are together in everything that is going on in your life. Thus, they consider having you in his life is a blessing and a precious thing. So, you will be highly treated because of the reason behind your relationship.

How loyal are Libra men?  Basically, they don’t rush to have a relationship because they know what they want in life. They spend time searching for the right partner because they don’t know what to mess around with within their lives. Therefore, being with a Libra man is a step forward because you will be going to a world of pure happiness.

The only thing to worry about with the Libra man is not getting overly emotional or overly strict about anything. He constantly struggles to maintain a level head, and he expects others to do the same. And you will have to jump in and make decisions at times when he can’t make up his mind.

Your relationship will move slowly while he analyzes every situation, so be patient while he takes his time. If your love compatibility is good then, don’t think of a breakup. Because once he makes up his mind, he commits to his decision, and he will stick by you until the end.

Dating a Libra Man is one thing that will move you to a world of fantasy because he is was born to have fun and explore the world. So, dating him is like you are going to stress-free zones. Equally, let your instincts guide you to the rightful person that you want to date.