Tarot Meditation For The Tower Upright

Meditation For The Tower – Upright

This tarot meditation of the Tower card upright will focus on the inevitability of certain tragic factors in our lives. It will walk us down the path that shows that some things are, in fact, inevitable. In certain cases there is nothing one can do but survive. Place the tower, upright, on your red cloth, with the candle at its top.

Settle down into the meditation, allowing the imagery of the card to overtake you. Allow yourself to be filled with a sense of safety, security, the knowledge that whatever is out there, you are prepared for it.

You find yourself standing on the parapet of a sturdy tower, staring out across the horizon. A moat stands in between, the doors are firmly secured from within. 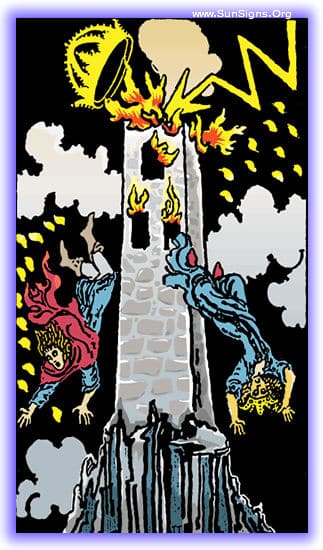 Barrels of food are stacked high against the walls of the kitchen, you have weeks of firewood stored away against inclement weather or attack. All is secure, all is safe.

As you stand on the horizon, you see an army marching towards your tower. No matter, the walls are impenetrable, and you know that you will be safe inside.

They set up around the tower, laying siege to it. At first all is going well, they are held off, unable to get through your towers defenses.


Then the head of the kitchen comes up, an alarm has been called, the fire has spread to the woodpile, kept too close to the fireplace.

It spread throughout the kitchen, destroying most of the food and water supplies, what’s left won’t last long.

Then the chirugeon comes up from the infirmary, a family has come down with the buboes, the marks of the bubonic plague.


The plague is in the tower, and no one is safe. With it’s veracity it won’t be long until the entire fortress is infected.

It is as if the gods themselves have turned against you, and the next day the rains come, with rumbling thunder and lightning strikes.

The storm is so violent it begins tearing stones from the walls, crumbling the upper tower, and weakening the mortar in the other.

On the tail of this, as all is crumbling, a massive earthquake strikes, and the tower falls. All within is ruined, many are killed, and the army standing outside takes the rest of you prisoner.

As you watch this sorrowful scene, come out of the meditation on the tower card, recognize that this is one of the points in life when all the preparation in the world wouldn’t have saved them.

As you come out, take any messages the meditation may have had for you, and record them in your journal. Know that in the end, even these situations will pass, but sometimes it’s a matter of survival, not dealing.