Tarot Meditation For The Tower Reversed

Meditation For The Tower – Reversed

This tarot meditation of the Tower card reversed will focus on what happens when we hide away, when all the world is our enemy and we keep ourselves so well secluded nothing can get in. Sometimes we go too far, sometimes we forget that if we build the walls high enough, we haven’t just made sure no one can get in, we made sure we can’t get out.


Set out the grey cloth in front of you, placing the matching candle at it’s top, and then lay the card down inverted on it. As you focus on it let the feelings of fear, insecurity, and danger overwhelm you.

Allow yourself to become inundated with a terrible distrust of the people around you, and the future. 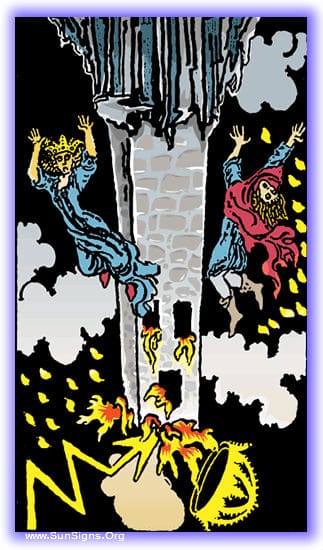 As you settle into the meditation, you will find yourself inside a well-appointed Victorian home. You’re the only one in the building, and everything within is in order. The windows, however, have bars over them, the doors are locked with multiple locks.


Even in the home, you wear an air filter, you know what kind of nasty diseases there are out there. You had a cat once, but you got rid of it after reading about cat scratch fever. Couldn’t have that around! You might get sick!

All of your food is prepared in the microwave, but you don’t stay in the room with it when it cooks, that radiation could kill you! But at least there aren’t any fires, and it sterilizes the food. Just gotta be careful in there.

All of your bills are paid online, but you’re careful not to spend to much time in front of the computer, after all, the rays from the screen could cause skin cancer.

The windows in the back are mostly overgrown, you used to have a gardener, but you’re certain he was robbing you, recording time he hadn’t actually worked.

You’d have checked up on him, but that would require being in front of the windows where not only is there a draft, but you know that someone out there is watching you.

Not watching over you, but actually spying on you, trying to steal your identity. Every glimpse they get of you gets them one step closer.


The life you live in this state is lonely, but it’s safe. You don’t talk to anyone, you don’t let anyone close, and you take all the precautions to be sure that you’ll be safe from disease, theft, life in general. Thank God you’re so careful, it keeps you from harm.


As you come out of the meditation of the tower tarot card inverted, carry with you that feeling, that knowledge. Think on it carefully by writing it in your journal, anything in there that seems familiar, anywhere you may be able to take more risks and live a larger life by virtue of that. Then let the feeling you carried with you through the meditation go. It’s the illusion of safety.