Tarot Meditation For The Emperor Reversed

Meditation For The Emperor – Reversed

This tarot meditation on the Emperor card reversed will be focusing on power that is out of control, the tyrannical leader, and the masculine principle out of control.

To this end we will be bringing the color red to the table, representing war and anger, power-madness, and aggression. Your mediation cloth should be red, your candle as well, and the card placed inverted before you.

As you descend into the meditation, you will find a longhouse lined with fire, at it’s front is seated an angry man with an unpleasant demeanor. 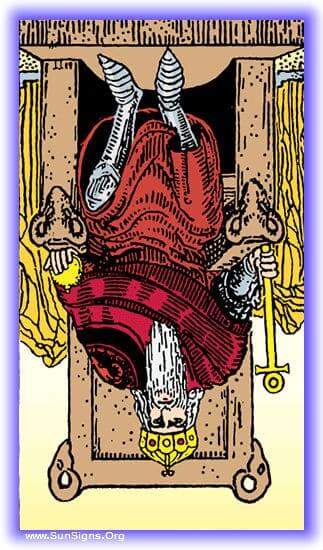 Everyone who comes before him pays obeisance, but their face is riddled with fear. The man at the fire, the King of this place, looks upon each in turn with a mix of suspicion and disdain.


They are less than he, and that much is apparent, he takes all he can from them, and they give it without resistance because here, his power is absolute. And though he knows they are less than him, he fears them.

They scheme to take his power, they hide the wealth he is so truly entitled to so that they can scratch out their pathetic meaningless lives.


You see the face of his advisor, and know that he is an advisor in name only. What he is, in fact, is a yes man, for he dare not know more than the King, the rightful ruler.

After all, all rules are his, he is beyond contesting, and he is omnipotent. The Masculine force gone mad. You will see that, unlike the Emperor upright, the children hide from him, his subjects avoid his gaze.


He makes his mandates, and he does not listen to the cries of those who try to explain they cannot do so much, they cannot do it this way. He only travels his Kingdom so that those who see him may fear him, may know that he watches.

He pays no heed to that which crosses his gaze, unless it is a thing he decides he wants. Then he takes it with little regard for those whom it belongs to.

His family is ignored and cast-off, his wife only there for his pleasure, his sons only there to propagate his family line.

Pay close attention to the details of this Emperor tarot card meditation, as you walk through the dictatorship of this petty king. Are there lessons for you here? Do you see examples of your own behavior, your own rulership style?

If so, take note of them, it might be a warning for you to open your ears and heart to those who look to you for guidance. As always, mark these details down in your journal.