What Is Yantra Mandala?

Yantra mandalas are primarily used in Hindu worship, but can also be applied to every day life. Like the mandala symbols, yantras focus on the circular nature of life and the universe. Life evolves and develops from the center outward, and these symbols serve to depict that.

Essentially, yantras are geometrical designs that symbolize the universe. They are made up of basic geometric shapes, including circles, triangles, squares, and crosses. Although they serve a similar purpose to mandalas, they are different in their physical appearance. While a mandala is a two-dimensional object, a yantra can also be three-dimensional. However, they are both used for reflection and introspection during meditation. By meditating with a yantra, the practitioner is utilizing an instrument to experience visions of the unseen. 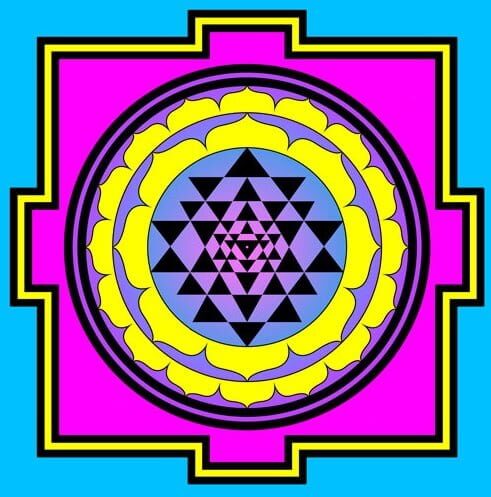 The most widely known symbol in this category is the Sri Yantra, which is viewed as the visual representation of the Sri Vidya mantra. This mantra is made up of 15 syllables, and visually, the yantra contains 15 goddesses. Sri Yantra is comprised of nine isosceles triangles of varying sizes. Five of these triangles, which point downwards, are considered feminine and are representative of Shakti, the goddess of feminine creativity and the Mother in Hinduism. The other four triangles point upwards and represent Shiva, the supreme god. Thus, this symbol symbolizes the intertwining of male and female energies.

Another more fitting representation of the Hindu Divine Mother presents itself in the Kali Yantra, the governor of both creation and destruction. Kali acts as a protector for the Earth and greater universe by shielding them from evil, thereby allowing us to live in peace and joy. However, as a powerful force, Kali is a force to be reckoned with, so we must behave accordingly if we wish to receive its benefits. By meditating in conjunction with the Kali Yantra, we can find solutions to problems that we had not previously perceived. Additionally, it is said to make our minds clear and fully functioning, which quickens our spiritual transformation.

The Ganesh Yantra is another focal point in Hindu spirituality. People typically utilize this tool when they are seeking good luck or are hoping for success in new ventures. Ganesha is another of most prominent and highly revered deities in Hinduism and is viewed as our biggest helper. This god can remove unnecessary obstacles for us, so we can also meditate using this yantra when we feel like we’ve encountered one. Ganesha will help to get the creative juices flowing, giving you the strength to knock down any physical and/or mental blockages.

The Durga Yantra serves a similar purpose as the facilitator of strength and creativity. This yantra portrays a warrior goddess who defeats our preconceived notions and offers us clarity and peace of mind. She is also a vessel for feminine energy to flow through.

As an embodiment of fortune, light, and pure beauty, the goddess Lakshmi makes for a wonderfully empowering yantra. In Hindu art, she is featured as both beautiful and compassionate, sharing her kindness and divine wisdom with all who engage with her bountiful, yet tranquil energy. If you choose to focus on the Lakshmi yantra during meditation, she will provide you with abundance and prosperity.

The final of the common Hindu yantras is a deceptive and fearsome one. Dhumavati lacks all physical beauty. However, this yantra calls us to look beyond outward appearances- be a higher thinker and do not judge a book by its cover, essentially. She is the seventh of the Mahavidyas, or supremely wise goddesses of the Hindu faith. As a powerful entity, Dhumavati aids us in finding the silver lining and dismissing false conceptions.

Although their symbolism and purposes are different, the Hindu yantra mandalas all have something in common: their most basic shapes. The squares, triangles, circles, and crosses present across this archetype of yantra are foundational symbols with concrete symbolic meanings that provide a starting point for your intention and meditation. By understanding these foremost meanings, you open your mind to comprehending more complex messages and interpretations.