The symbolism of swords is power, protection, intellect, and manifestation of skills that can be important in making life changes. You have to focus on important things that consolidate around rulings and achieving the success that you want. So, you have to show determination and passion in what you aim at achieving. The sword’s symbolism tries to eliminate anything negative and will bring destruction if you don’t work smart. Practice good traits that can attract the right kind of people in your life.

What Does a Sword Symbolize In The Bible?

It is the affirmation of power that can read good things into your life. When you think of having a great leader with an agenda to change society, the swords come in plenty. So, seeing it into your dreams should spark the inner leadership qualities that you have and can assist you in making progress in the right direction. Let your natural abilities be the genesis of everything that you think will bring the right changes into your life. But you have to accept the new ideas that can be of assistance in bringing your success close.

Aggression, seeking power, and the use of natural abilities are the influence of the sword symbolism on your life. Sometimes you might encounter it in your dreams, and it has to link your expectation in the right channel of your thoughts. Do self-evaluation and think of better chances that can accrue if you stick to your principles of success. Anything that might affect your progress has been rejected from your line of work. But a positive mind will help you come up with something that will give you the right confidence and success at the end of the day.

What Does a Sword Tattoo Symbolize?

As you aim at something, passion and determination should play a key role in ensuring you achieve anything that you want in life. The success you want will come easy when you have the right attitude and willingness to find new life pieces.

Swords have been around for a very long time. From ancient times up until the recent past, they were used as a weapon and thus stood for bravery, courage, defense, and valor, to name a few. However, the meaning of sword goes much deeper than weaponry and protection. In the alchemical realm, swords were using symbolism purification. This makes sense, as the sharp blades of swords could swiftly and cleanly slice through anything, including the body and soul of a human.

Furthermore, a double-edged sword uses this spiritual avenue to symbolize the dualities that are present throughout nature. Most notably, though, is the duality between life and death. Even the creative process by which swords are made is symbolic. Because this process incorporates all world elements (earth, air, fire, and water), we can deduce that the birth of a sword is congruent with creation itself. This brings about balance and unity themes since all of the elements join together for a common cause. In a general sense, though, swords can symbolize various things, including aggression, strength, action, justice, leadership, and decision-making. 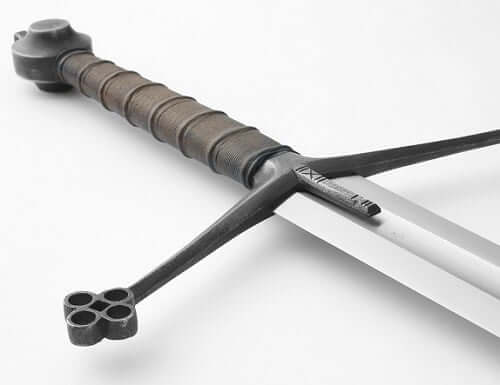 Since swords have been used worldwide for hundreds of centuries, their symbols can also be culturally specific. As a Celtic symbol, the sword had powerful implications. Take a visit to a history museum in Dublin, and you will find entire rooms filled with beautifully crafted swords.

The sword was first and foremost associated with the first king of Tuatha De Danann, Nuada, to the ancient Celts. This clan was believed to under divine protection as they fought to take Ireland back from invaders. As such, Nuada’s sword is still deemed one of the four Celtic treasures. Many words have been found underwater in Ireland, proof of the personal sacrifice and tribute paid to Nuada, who was associated with the underwater realm.

Later, in the Christian tradition, the sword also stood for justice, righteousness, and protection. The archangel Michael, the messenger of God, is frequently depicted in old art with a sword, reinforcing the ideas of the power of heaven. Many works of art also depicted a fiery sword blocking the gates of the garden of Eden, where the original sin was committed. Here, it served as a warning of God’s omnipresence and power, as well as an indication that only the pure of heart can enter the kingdom of God. Swords were also believed to remind Christians of the righteous and pure nature of their cause and faith.

In the Congo of Central Africa, swords have a slightly different implication. There, these sharp objects act as symbols of transition. The crossguards of many swords feature one point turned upward toward the heavens while the other points are earthwards. This symbolizes the journey and cycle between life and death. Additionally, in a more nature-driven sense, these opposite facing points connect the earth with the sky, making the difference between the living world and the afterlife seem less intimidating.

Like other symbols, swords also have significance when they present themselves in dreams. The Chinese, like the Celts, also had an intricate network of spiritual and symbolic connections. In the case of the dreamt sword, the Chinese tradition is associated with the gender of an unborn baby. If the dream includes a woman pulling a sword from water, it is interpreted as an indication of a future son.

In a more modern frame of mind, we can follow the teachings of Dr. Freud, who postulated that swords stimulate ideas focusing on personal character, truth, determination, and chivalry in the dream. These themes, according to him, are all quite phallic and masculine in When you think a, it does make sense about it, it does make sense – a sword certainly does mimic the male genitalia in its physical appearance.

When analyzing the sword, you can approach the topic from many different points of entry. No matter how you slice it, the sword does speak wonders to us. It may mean different things depending on whether you are male or female, but this makes symbolic interpretation great. There are no rights and wrongs. Whatever something makes you think and feel is okay because it is unique to you.

When you have the positive kind of people in your line, you end up leading a good life, and the power inside will help you make choices. So, the symbolism of the sword on power, leadership, and strength are the virtues that can assist you in finding your dreams and desires.