How compatible are Pisces women and Leo men mentally, emotionally and sexually? It may be difficult to mix the water sign of the Pisces woman with the fire sign of the Leo man. She is quiet and demure while he is loud and boisterous. She might become a wet blanket to his fiery passion. But if there’s an attraction, then this Pisces woman and Leo man relationship can work.

If the female fish comes across the male lion, she will see him first but he will definitely make the first move. The Pisces woman is often standing by herself, surveying the room, and he’s hard to miss. The Leo man is usually in the middle of a crowd, talking loudly and laughing often, and no one can pass up the opportunity to join in except maybe her.

And because of this, he wants to bring her in to mix and charm her as he does everyone else. Of course, she already knows this because of her incredibly intuitive nature, and she will play the part for now. The Pisces female gazes upon him fondly and strokes his ego, and he responds by focusing all of his attention on her.

And she can keep up with his witty banter and smart personality. She sees how ambitious and driven the Leo male is, and she offers lofty goals for which he could reach. It’s because of this kind of give and take that she allows him to take her into the bedroom.

But the Leo man will have to practice more sensual techniques if he doesn’t want to scare off this delicate Pisces woman. By the same token, she will have to rev up her sex drive to keep up with her lion.

This Pisces woman Leo man couple can help each other out if they are willing to compromise. Because Leo men are so driven they take the reins and handle all of their responsibilities, which is good for she doesn’t care about such things. And she’s able to help him dream bigger than he ever would have by himself.

And with their caring and nurturing manner Pisces women will be able to offer the Leos the attention he craves on a regular basis. Because of this, he will treat her as his queen and protect her from everything. 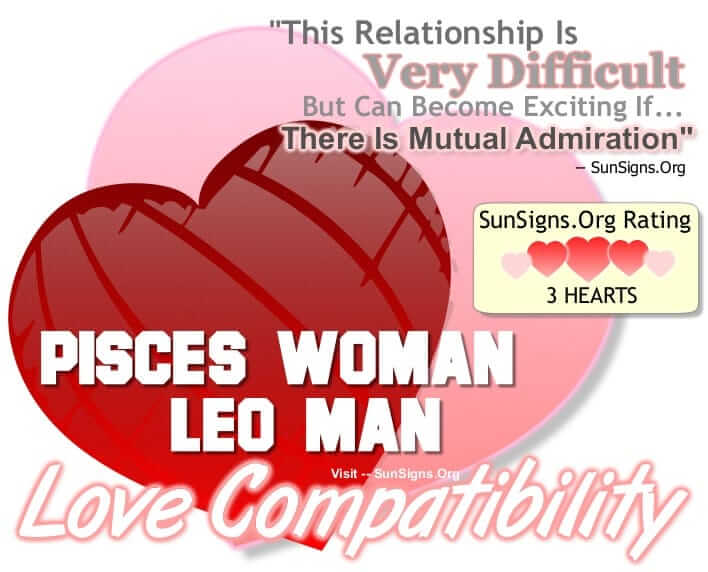 The Pisces woman is soft and delicate and he is strong and fierce. He’s looking for someone to stalk the plains with him and she is simply lost in the moment emotionally. The Leo male is incredibly passionate but in a physical manner, and this may be overbearing for her.

The Pisces female prefers simple affection and romance and he is easily bored with such an approach. Plus, because she often has her head in the clouds he feels as though she is not as involved in their lovemaking. He needs constant attention and she may come off as aloof or detached.

She will have to be careful not to stray from his primal urges. The Leo male too also have to tone down his lusty nature. He can take charge between the sheets for she doesn’t care about being dominant, and that works with his natural tendency to take the lead.

But problems will arise when she wants to stay home and he wants to go out for a night on the town. If there are disagreements, she will hear him roar! And that will cause her to swim below the surface to avoid confrontation. The Pisces and Leo will have to learn to communicate with each other to avoid unresolved issues. The love compatibility between these two zodiac signs is just about average.

Pisces is a mutable water sign whereas Leo is a fixed fire sign, the Pisces woman Leo man compatibility gets a THREE Hearts rating. If the Pisces Leo match can find a compromise, their devotion to each other is unbreakable.